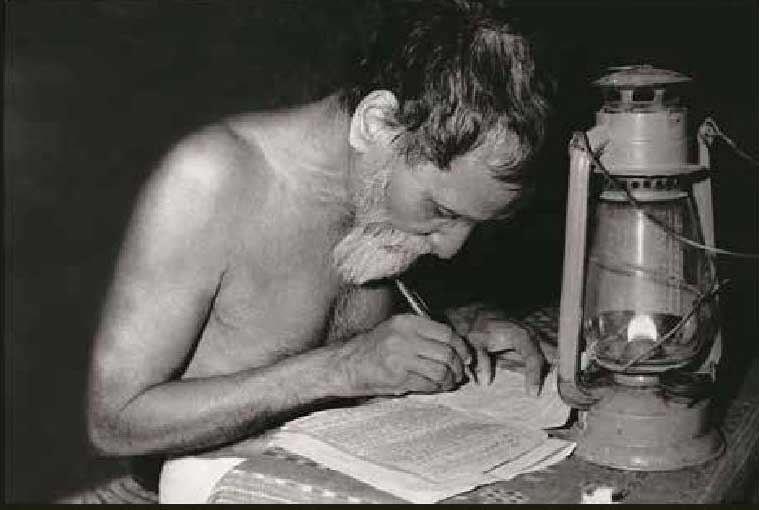 Vinayaka Narahari Bhave, better known as Acharya Vinoba Bhave (11 September 1895—15 November 1982) was an Indian advocate of nonviolence and human rights. An associate of Mahatma Gandhi in the Indian independence movement, he was chosen by the Mahatma in 1940 to be the first individual Satyagrahi against the British rule. Best known for his ‘Bhoodan Movement’ through which he took donated land from land-owners and gave them to the landless for cultivation, he spent his last years at the Brahma Vidya Mandir in Paunar (situated in the district of Wardha in Maharashtra) which he had established in 1959. He was the first recipient of the international Ramon Magsayay Award for Community Leadership in 1958 and was also awarded the Bharat Ratna posthumously in 1983.

Acharya Vinoba Bhave had visited the Sri Aurobindo Ashram at Pondicherry in July 1956. He had recounted his experiences of visiting the Ashram to Vimala Thakar and Damodar Das Mundra. The present article is a translation made by N. M. Bhatt from the original which was published in the Gujarati journal Bhumi Putra’s special issue on Sri Aurobindo Birth Centenary in August 1972.

Vinobaji replied, “The life I saw there was exactly like the one I had imagined it would be in the Ashram. I already knew that I would get to see there a life quite different from the life and style I am living and experiencing. I had the idea that a mystical psychological process was going on there and I actually saw such a process going on.”

I said, “The Ashram people say that there is an experiment going on to establish unity with the Supramental cosmic consciousness.”

Vinobaji replied, “I have used the word ‘psychological’ in a wider, rather all-pervading sense. By this I mean that the Sadhana is done on the mental level. It has three ways. Just as one can commit suicide with the body, so one can kill his own mind also. The second way is to quieten the mind i.e. to stop the acts of desiring and doubting. And the third way is to go beyond the mind.”

Vinobaji stopped here for a few minutes and then proceeded to say, “After reaching the Ashram, I was told to meet the Mother. If I had wished I would have got even an hour or two to talk to her. But I told the gentleman, ‘Our Indian specialty is Love of Darshan. I am also a Lover of Darshan. Therefore, the meeting between the two of us will not be for more than four or five minutes.’

“Immediately on meeting the Mother, I asked her, ‘What is your age?’ The Mother replied, ‘Seventy-eight’, and I said, ‘Then you will have to live at least twenty-two years more.’ And the Mother immediately replied, ‘Oh! yes, of course.’ Looking at the vigour, activeness and alertness she has at her age of seventy-eight, we definitely feel that She can easily live for another twenty-two years; but we will also not have any conflicting feeling if it doesn’t happen like that because the Mother’s desire is not the only thing, only that happens which the Lord wants to be. Still, the self-confidence that I saw in her reply was no ordinary thing. From the spontaneous faith with which she had replied, it seemed that she had already gained victory over death. I was very much impressed. After that we went to Sri Aurobindo’s room and when I returned the Mother gave me some flowers into our hands.”

I said, “I have heard that the Mother has written one or two books about the importance of flowers in the sadhak’s life.”

Vinobaji replied, “There is already a science of chromotherapy, we call it colour-theraphy.” Then Vinobaji went on to say, “There I was also given Sri Aurobindo’s book Savitri.”

“Many years before, Sri Aurobindo’s book The Life Divine was sent to Bapuji [Mahatma Gandhi]. Then Bapu remarked, ‘I have no time to read this kind of book,’ and he sent it to me, and said, ‘Read this.’ It was a book by Sri Aurobindo and in addition it was sent by Bapu. So I with honest feelings took the trouble to read it through. When I say that I read it through, it should be understood to mean that I crossed an ocean. In the same way I had faithfully read Marx’s Das Capital.  This book Savitri is Sri Aurobindo’s last writing and it is said that he has presented many mysterious things there. It is a book of 500 pages. Looking at the way my life moves, nobody hopes nor do I hope that I will be able to read it. I don’t know whether I will be able to read it during this life. But I can well imagine what Sri Aurobindo must have written in it. I imagine that in Savitri there is a description of the experiences one has on facing the Law of Death (Yama-Dharma) or after the vision of death. It is worth understanding what could be the meaning of the vision (Darshan) of the God of Death, when one is still alive. The meaning of the Law of Death (Yama-Dharma) is the reputation and honour of death i.e. art and science of holding the vital energy (Prana). He who gains this mastery, experiences samadhi, the liberation is obtained. Sri Aurobindo says that after his liberation time, his sadhana began.”

I said, “This thought is very similar to the thoughts of Krishnamurty. Krishnamurty says, “Freedom first.” Vinobaji said, “Krishnamurty does not believe at all in sadhana. He says that we are free even at this present instant. Sri Aurobindo says something very different. He talks of Descent of Consciousness only after liberation. Up to liberation, man is busy with his own emancipation. He carries on the sadhana for liberation. Only after this liberation, the Descent of Consciousness can start. For this Descent, it is not necessary to abandon the body. This body can be made so divine that it becomes eternal. But much importance should not be given to the body even. If one does not find the body useful, the body can be abandoned. A yogi’s body does not die, he can leave the body according to his desire. Works done in such a state are the true works. Man becomes the real doer in the true sense at that time. He who does works, not under the control of the senses and not controlled by other common things, he really works. The beginning such of works occurs after one is liberated.”

I said, “These thoughts come in the teachings of other saints also.”

Vinobaji said, “Yes. They do come, but not in this form. Saint Tukaram had asked ‘Who can take away my status of an All (Self) Soul Person (Sarvatmak Pan) .’ There are many such words. But in what Sri Aurobindo talks about the Descent of Consciousness and Supramental things in man we see many new elements and a freshness. It can be said that in the matter of mind this is Sri Aurobindo’s uncommon contribution.”

I said, “You remain in Sahaja Avastha — the natural state of realization. Have you had any realization when in the Ashram about the Sadhana of Sri Aurobindo and the Mother?”

Vinobaji said, “If any person, saying that his life is only for liberation, leaves all thoughts and matters and takes up Sadhana, the effect of this action on our heart is considerably strong. To have such impatience for liberation is not any ordinary thing. In that Ashram, there are so many who are doing Sadhana and when I saw this I was happy. There I met several old familiar friends and met many good people. You well know that I have a habit not to go to a place with a critical look.”

I said, “Yes, if a man goes to a place with a critical look, he has no capacity to absorb the good things of the place.”

Vinobaji: “The Mother told me, ‘The work you are doing is good work. You are doing that which is really worth doing.’ I have also heard that the Mother was telling some Ashramites that Vinobaji and Sri Aurobindo were already collaborating with each other in the subtle but this collaboration should be conscious collaboration.”

I said, “Does it mean that this effort at conscious collaboration should be done by you?”

Then smiling he added, “I said to her what I had to say.”

I said, “You have mentioned that the experiment being tried at Pondicherry should be tried in an Ashram built in a remote village. According to my understanding their sadhana can’t be done together with the contact and service of the people.”

Vinobaji: “There is no prohibition with the contact and service of the people. As I understand Sri Aurobindo, he does not see the need of this but he has not prohibited it.” 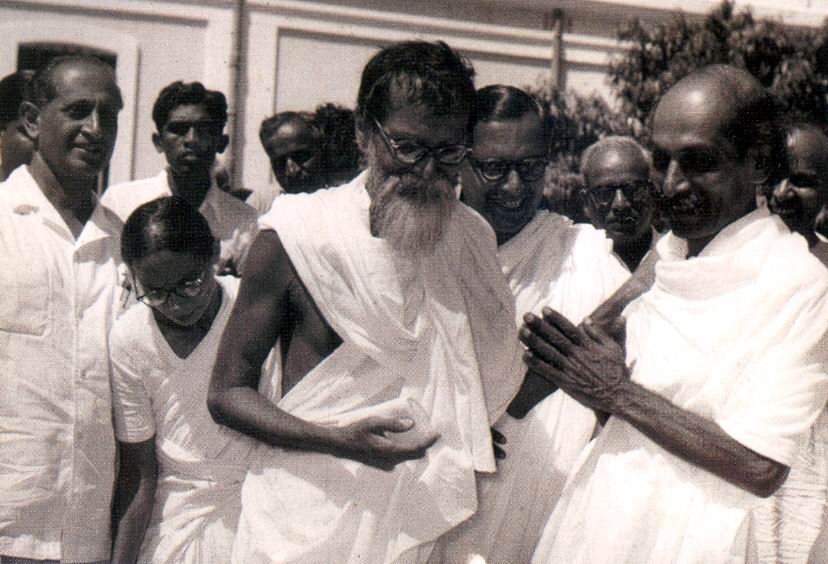 Meeting with the Mother

For some time, the Mother looked with a fixed gaze on the face of Vinobaji as if she was trying to read beyond it with great concentration!

Vinobaji made the beginning with the question, “How old are you?” The Mother’s hands were up to now folded, they came now on to the arms of the chair and she replied in an extremely pleasant way, “Seventy-eight.” Vinobaji: “Then you must live at least twenty-two years more.” She said, “Oh! Yes, of course.”

These introductory talks had hardly been completed when Vinobaji expressed his desire to hear some words of advice from the Mother. So the Mother said: “Oh! You don’t require any advice! You know what you want to do and you are doing it perfectly. Vinobaji insisted with the words, “But even so some good words from you will be useful.” In the meantime, the Mother had started to speak on her own, “For us here there is only one thing that counts: we aspire for the Divine, live for the Divine, act for the Divine.”

After that Vinobaji did not think it fit to take more of her time. Afterwards, in a lighter vein, he told us all, “Others get hardly one minute. I took a lot of her time.”