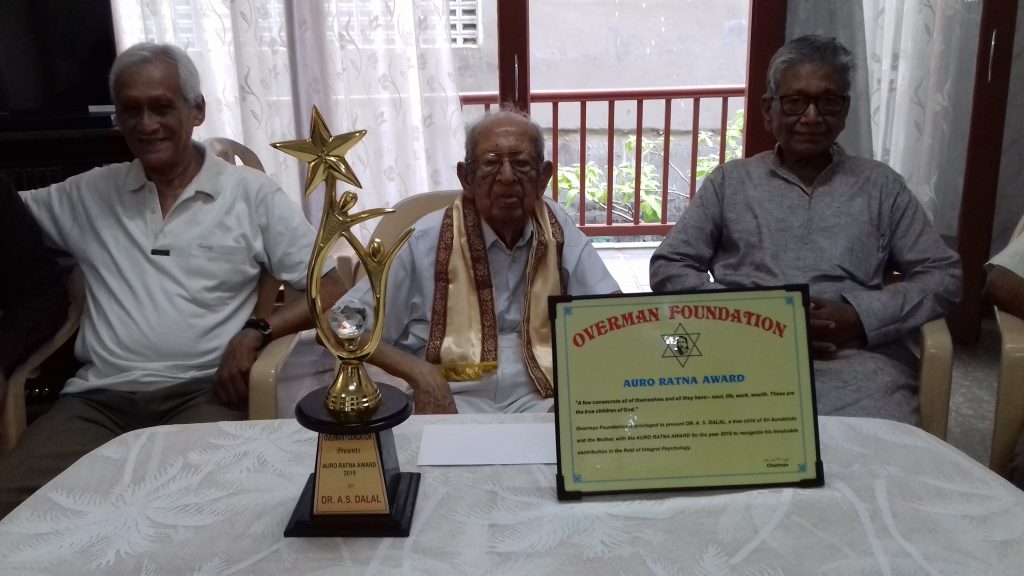 The ceremony began at 10.30 a.m. following the Mother’s organ music. Shri Anurag Banerjee, Founder of Overman Foundation, briefly spoke about the history and objectives of the ‘Auro Ratna Award’. While introducing Dr. A. S. Dalal, he said:

‘Born in Tanzania on 17 February 1926 to Suleiman and Kusum Dalal, Dr. Ardeshir S. Dalal developed a keen interest in questions pertaining to God and the origin of the universe when he was in his fifteenth year. Despite being born in a conservative Muslim family, he was drawn to all religions and went to Muslim, Hindu and Christian places of worship. Having completed his high school education at Tanzania in 1944 he came to India in 1945. At the age of nineteen he came in contact with Theosophy and found the answers to his intellectual queries in the works of H. P. Blavatsky. He joined St. Joseph’s College in Bangalore for his Bachelor of Arts degree but later shifted to Wadia College in Pune from where he obtained his degree in 1950. Meanwhile, when he was twenty-one years old, he came in close contact with a devotee of Sri Aurobindo and the Mother who introduced him to Their works and teachings. The Mother’s Prayers and Meditations particularly made a strong impact on him. In April 1950, he visited the Sri Aurobindo Ashram at Pondicherry, stayed for a week in the town and had the Darshan of Sri Aurobindo and the Mother on 24th April. The Darshan of Sri Aurobindo was a turning point in his spiritual quest and he grew less interested in Theosophy and more drawn to the yoga of Sri Aurobindo. He wanted to do his Ph.D on Sri Aurobindo but could not find a guide. He visited Pondicherry in 1951 and expressed to the Mother his keenness to join the Ashram. The Mother, however, remained silent. Following the advice of Manibhai Patel, a follower of Sri Aurobindo and the Mother, he went back to Tanzania where he took up a temporary job. Meanwhile, Khodabhai Patel, a senior member of the Ashram who was also from Tanzania, wrote to Dr. Dalal asking him to come back to Pondicherry. Dr. Dalal replied that he had asked the Mother for permission to stay in the Ashram but She did not give any reply. Khodabhai assured him that he would talk to the Mother. He did. The Mother responded that Dr. Dalal could take a long leave from his job and visit Pondicherry but advised him not to resign. Since taking a long leave was not possible, Dr. Dalal resigned from his services and came to the Ashram in November 1951.

‘A few days before his twenty-sixth birthday, Dr. Dalal approached the Mother with the request of being accepted as an Ashramite. On 17 February 1952—on his birthday—the Mother accepted him as a member of the Ashram community. From 1952 to 1959 he worked in the Ashram Press as the assistant to Naren Das Gupta, the then Manager of the Press, and father of Manoj Das Gupta, the present Managing Trustee of Sri Aurobindo Ashram Trust.

‘In 1959 Dr. Dalal left Pondicherry, went back to Poona University from where he completed his Masters in Experimental Psychology. He got married on 18 December 1961 and went back to Tanzania in 1962. When Tanzania got her independence, he shifted to the United States of America in 1964 where he worked, for the next two years, as a pre-doctoral intern in a mental health centre in Boston. At the same time he pursued his Ph.D at the University of Boston. Later he shifted to New York where he worked in a Post Graduate Centre in Medical Health from 1966 to 1970 as a trainee in Psychotherapy and Psychoanalysis. Afterwards he took a job in Oregon where he worked till 1981. Meanwhile he also obtained his Ph.D degree. In 1981 he resigned from his services, went to Ohio and joined the Institute of Integral Psychology (which was founded under the influence of M. P. Pandit) and worked there for two years. In 1985 he shifted to Dumont and finally returned to Pondicherry in January 1986. For the next twenty years, he was associated with Tresor Nursing Home.

A brilliant exponent of the teachings of Sri Aurobindo and the Mother, Dr. Dalal has compiled the following noteworthy books from the works of Sri Aurobindo and the Mother which have been received warmly by critics and readers alike: Emergence of the Psychic (Governance of Life by the Soul), Growing Within (The Psychology of Inner Development), The Hidden Forces of Life, Living Within (The Yoga Approach to Psychological Health and Growth), Living Words (Soul-Kindlers for the New Millennium), Looking from Within (A Seeker’s Guide to Attitudes for Mastery and Inner Growth), Morality, Idealism, Religion and Yoga (The Meaning of Spirituality), Our Many Selves (Practical Yogic Psychology), Powers Within, The Psychic Being (Soul—Its Nature, Mission and Evolution), Steps to Freedom and Mastery and The Yoga of Sleep and Dreams. His other books A Greater Psychology: An Introduction to the Psychological Thought of Sri Aurobindo, Sri Aurobindo and the Future Psychology and Eckhart Tolle and Sri Aurobindo have also been favourably received.

In 2008, Dr. Dalal was presented with the prestigious ‘Sri Aurobindo Puraskar’ by Sri Aurobindo Bhavan, Kolkata.

‘Dear Friends, it is our privilege to be able to present the ‘Auro Ratna Award’ — named after Sri Aurobindo — to Dr. A. S. Dalal — a most sincere child of the Mother and Sri Aurobindo.’ 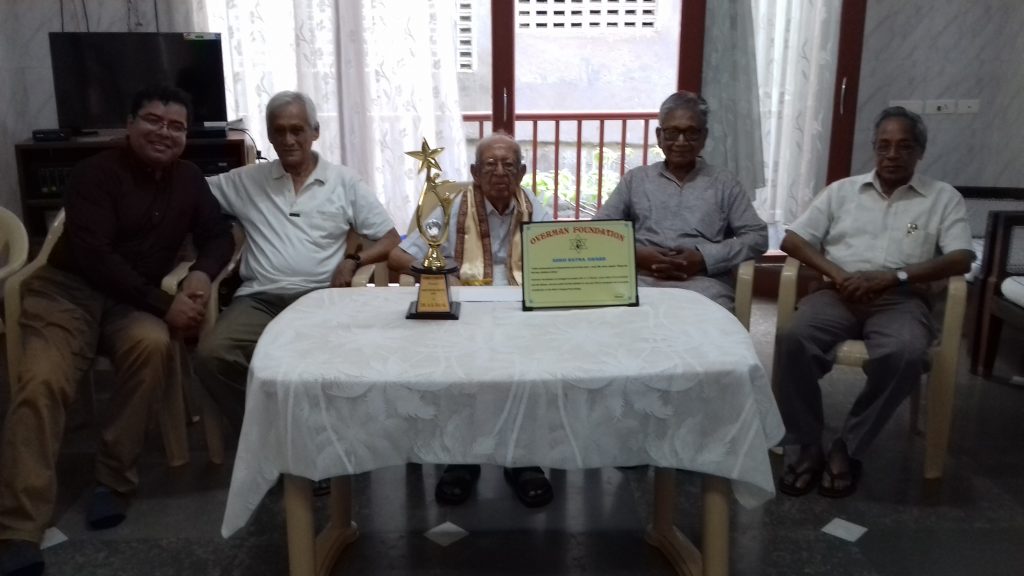 As a thanks-giving note, Dr. A. S. Dalal recited two prayers from the Mother’s Prayers and Meditations. 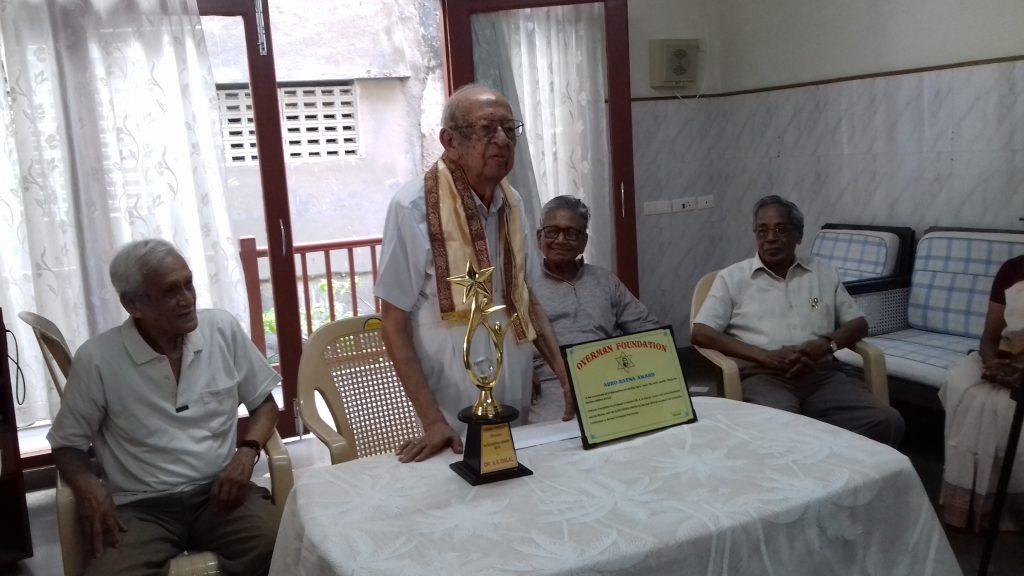 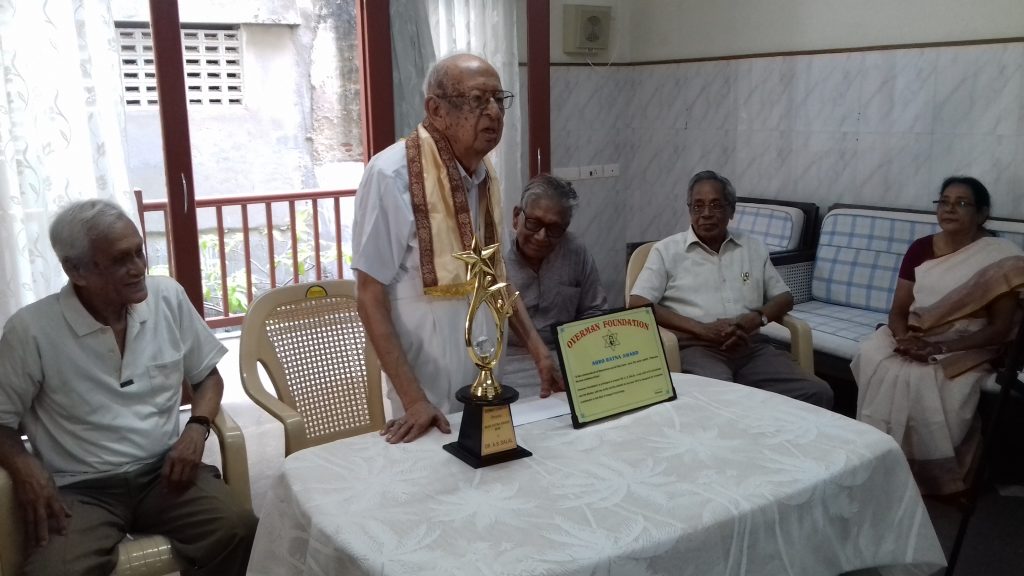 Shri Anurag Banerjee thanked all the guests and audience for gracing the award ceremony with their august presence. 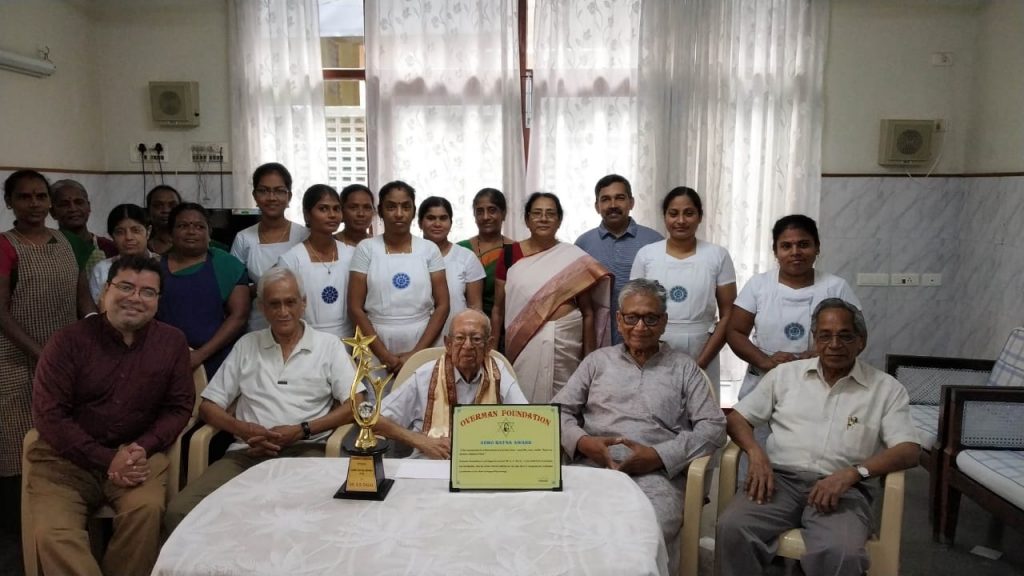