On 2 February 1988 Dyuman had given a talk on the Service Tree to some of the youngsters of Sri Aurobindo Ashram outside his room in the Ashram main building. The slightly abridged version of the said talk—which was originally published in the January 1989 issue of Mother India (the monthly magazine published from Sri Aurobindo Ashram, Pondicherry)—has been published in the online forum of Overman Foundation. 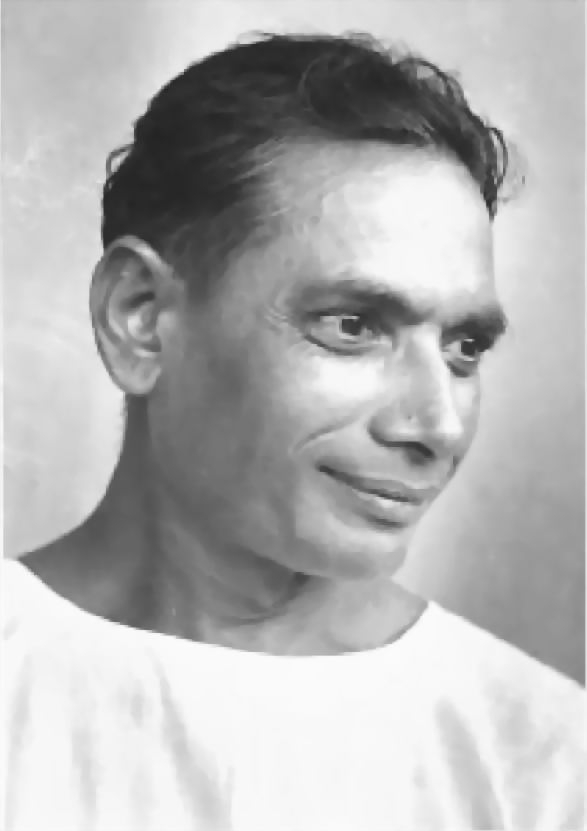 Uptil now we know that Hanuman was the greatest servant, dāsa. Today I will tell you how Sri Aurobindo used to serve the Mother, how he waited for the Mother when she was late.

We usually had the night-meditation at 12 o’clock, 1 o’clock or 1.40 a.m. One night after 11, seeing the people waiting, the Mother said, “I am coming.” Then she rested. She went into a trance. Now it was 1.40 a.m. People were waiting downstairs. Sri Aurobindo was waiting in his room. The Mother was not to be found. Where is the Mother? I went to Sri Aurobindo. I found him sitting on his bed waiting for the Mother from 11 o’clock… I said, “She is in a trance.” He replied, “Wait 3 minutes, wait 5 minutes. If she doesn’t get up, tell the people to go home.” I waited, no response from the Mother. I went again to Sri Aurobindo and told him, “She is still in a trance.” “Tell the people to go home.” At 1.45 a.m. I went to the small window half-way down the Meditation Hall staircase and announced, “Sri Aurobindo says, ‘Go home’.” Then the Mother woke up and actually started running. “Ah! they are all waiting!” “No, Mother, Sri Aurobindo asked them to go home.” “But food for Sri Aurobindo?” Sri Aurobindo, like a dāsa, had been waiting for her all the time.

The Ashram consisted of four different houses. One by one they were hired or purchased and joined together. The Mother and Sri Aurobindo were staying in the Library House—what is now the entrance to the Ashram. They came to this house on 8 February 1927. Subsequently new building-work started. To wash the bricks for this work and for the cement, three tanks were built in 1930. From Prosperity Hall to Ravindra’s fruit-room all was newly built.

There was a mango tree where the Service Tree now stands. The mango tree was to be cut down, the Mother asked us to get a Service Tree (plant) from the Botanical garden. As Parichand is now the Ashram gardener, Manubhai was then the gardener—his helpers were Ambu and Dyuman. Manubhai is gone, Ambu is here still, Dyuman also is here. The tree was planted on a Tuesday. Why this was done we couldn’t make out. In 1930 it was planted.

Did the Mother plant it herself?

No, the Mother asked us to plant it. The place those days was full of cats—would go on the roof, drop the tiles, because they would always fight; and there was always a lot of noise. They were everywhere. So we asked the Mother, “Why not remove this? why not remove that?” “No, no! If you want, you may fill up these three tanks with sand or something and put ferns on top.” We did that when Sri Aurobindo left his body. She said (now listen carefully), “I want to keep him in the centre of the Ashram. There are three tanks—keep the western side tank as it is, the other two you can make one. Go deep down 10 feet. Put Sri Aurobindo at the bottom. At 5 feet put a slab.” Then she uttered a prophecy for herself—“If something happens to me, put me there.” So, accordingly, He is below, then comes the Mother, and at the top you go and surrender yourselves to Her and to Sri Aurobindo. And this Sri Aurobindo and this Mother we are all serving. That is the gist of the beginning of the Service Tree.

Whom does it serve? I told you, “The Mother and Sri Aurobindo.” How each of them served each other I have told you. Why the place was kept there from 1930, that she knew, though she was telling us, though Sri Aurobindo was telling us from 1920 that he would remain for ever and 24th November 1926 was declared the Day of Victory, and two days later was the Immortality Day. The Mother brought down the Force of Immortality. But the Divine Grace has other ways. He left his body and the Mother decided to keep him in this Ashram at the centre, not outside, so that this becomes the centre of the universe and the universe comes to the Lord for the new life and She merges into Him. This is called Sri Aurobindo’s Samadhi. She merged into him. No separation between the two.

The tanks were here, and we have heard that there was a kitchen somewhere.

That was on the southern side. When the Ashram started, the Ashram meant formerly Sri Aurobindo and around him some of his people—not relatives but those who followed him. They were here. Then when the Overmind’s descent took place on the 24th November the Mother and Sri Aurobindo thought, “What we have received is a surety for the next thing—the Supramental Descent, why not give facilities to aspiring souls?” Remember these words: “Let’s give them facilities so that they may aspire more and something more may come down upon earth.” For this reason they called this establishment the Ashram. There was no other suitable name. So we had the kitchen and the dining room here, not there, from 1927—1934. On January 4, 1934 we shifted from here to the present dining room building.

Where was the mango tree?

When we purchased this house the mango tree was in the centre of the courtyard, where there is the coconut tree now.

Was it cut down?

The tree died and we had to remove it…

Were there any mangoes?

No, we never received any mangoes, never. But under that tree were all our departments: lime, bricks, tin-making, workshops, were here in this small place. Nowadays we have so many departments separately.

When did you come here?

I came in 1924. I met Sri Aurobindo. In those days there was no staying arrangement. He asked me to go back. I told him, “As you are asking me to go, I am going but I shall come back, for this is the home for me.” Home, I made a difference between a home and the Ashram, because I belong to a home. And I came back in 1927 when the Ashram began and I am still here.

Did you water the Service Tree every day?

Yes, Ambu and I. You know Ambu? He stays at Nanteuil. He came in 1928 as a young boy. We were a gang of workers. These are the stories of 60 years ago.

Were there tanks where the Samadhi is now?

There were three tanks. Here the wall was removed. Where you take tulsi leaves from the Samadhi, that was the third tank. The wall in between was removed. On the morning of December 5, Sri Aurobindo left his body at 1.26 a.m., and the work began. On the morning of the 6th when the Mother went to his room, she found that his body was changing its colour and becoming golden. Usually bodies become black after death. On the morning of the 7th, it became more luminous and on the 8th even more so. But according to the law we couldn’t keep the body for long. So the doctor of the General Hospital had to be called to certify that the body was intact, in perfect condition. On the morning of the 9th, it showed some signs of discoloration and it was decided to bring it down. By the middle staircase it was brought down from his room.

At one time, the Mother had the idea: “Here there are too many people, too much noise. I wish I could give Sri Aurobindo solitude.” She thought of purchasing the Trésor House where Dr. Satyavrata has his Nursing Home now. Then Sri Aurobindo said, “No, if I move, the whole world will tumble down. I won’t move at all.” And he remained here, so much so that no rain, no cyclone could disturb him. He was engrossed deeply in his work.

Once there was a big cyclone. The Mother rushed to his room to close the windows. He had no idea that there was a cyclone raging outside. He was writing, that’s all. So that was Sri Aurobindo.

When you planted the Service Tree, didn’t the cats disturb it?

No, the cats did not disturb it and everything—the cats, etc.—remained unchanged till 1945. When the Second World War was going on, there was the threat that the Japanese might come and drop bombs here, then we built a new house where two old houses had stood.

When was the concrete structure built to hold the branches of the Service Tree?

The Service tree began to grown, the branches began to go on the roof of the old house. We had to remove the old house. What to do with the branches? So this scaffolding was built—what we call the Sanchi railings were created. They were done by Sammer the architect from Czechoslovakia who had come here with Raymond and Nakashima and together the three of them built Golconde. So this whole creation in the Ashram courtyard was by Sammer and at the foot of each pillar you’ll find a square place. You see, the Mother used to come in the evening on the terrace and give meditation. Her idea was to have grass in each square but that could not be done, so pebbles were put.

When was this built?

The whole thing started from 1930-32. When the first-floor room was ready, then the Mother came there on 24th April 1932. She used to be in the small corner room where Champaklal now stays.

Yes, because of all-round protection and then water, and thirdly because the Mother was always looking at it. The Mother is responsible for its growth. So often in cyclonic weather the branches were broken. If you look carefully, you’ll see that many have been cut. As they were broken we had to cut them off.

Didn’t the roots disturb the place where Sri Aurobindo’s body has been kept?

Well, I haven’t gone down where the body has been kept, so I can’t say.

But when the pit was being prepared?

No, at that time nothing. Then the tree was very young. Now it’s very big—a giant tree. But 38 years back, it was only 20 years old. Now the roots are moving everywhere. They have even crossed the wall and gone on the other side.

Is the tree still young?

I’ll give you the picture of the Service Tree filled with flowers. When it was 50 years old, the picture was distributed to everybody…

What was your age when you came here?

I was 21. I wandered about everywhere. I wanted to be an Himalayan monk, I went to the Belur Math of Ramakrishna, I went to Shantiniketan. I wandered. I was destined to be here…

5 Replies to “Dyuman’s Talk on the Service Tree”