Johannes Hohlenberg (1881—1960) was a Danish artist and author whose published works include a biography of Søren Kierkegaard and treatments of the latter’s works. He visited Pondicherry during the First World War, met Sri Aurobindo and also made a portrait of his. Sri Aurobindo would later recall about him, ‘In 1914 when the Mother came here, there came also a Danish painter who did a sketch of me. At the end of every meditation, he used to say, “Let us now talk of the Ineffable!”’

Johannes Hohlenberg, who was well-read with the works of Max Théon, also met the Mother in France. On his insistence, she taught him the art of exteriorization. Years later the Mother would recall to Satprem: “… I taught him how to do it [exteriorization], and what’s more I was there, he did it in my presence. And, my child, the moment he went out of his body, he was throw into such a panic! The man was no coward, he was courageous but it terrified him so! Sheer panic…”

The first part of Johannes Hohlenberg’s recollections of Sri Aurobindo is quoted from a letter he had written to a devotee of Sri Aurobindo in 1948. This letter, originally written in French, is brought to light from the Archives of Overman Foundation.

Anusuya Kumar, Ph.D from the School of Culture and Society, Aarhus University, Denmark recently presented a meticulous research work on Johannes Hohlenberg where she discussed his encounters with Sri Aurobindo and the Mother. It is from her presentation that the second part of Johannes Hohlenberg’s recollections and his painting of Sri Aurobindo are republished in the online forum of Overman Foundation.

Johannes Hohlenberg’s letter to a devotee of Sri Aurobindo

“Concerning my visit to Aurobindo in Pondicherry in 1915 it is difficult to give details.

“First it is 33 years ago, and my staying there was very short owing to the fact that I was arrested by the Englishmen and put on board of the first ship leaving for Europe. It was during the first war and, as I later knew, my frequent visits to Aurobindo’s house had thrown suspicion on me for being a spy or a revolutionary, as at that epoch his brother was considered as a very dangerous rebel and even he himself was not looked upon with favour. Indeed I was warned by the British consul in Pondicherry, who told me that, though he knew that Aurobindo was perfectly innocent and absolutely honest, I was very likely to be arrested, if I left Pondicherry for English territory. And that is what happened. So my sojourn in India, that was intended to last much longer, was interrupted after little more than a month and all my plans overthrown. Later on my journey home I was again arrested and detained in London for 3 weeks, for the same reason. But that is another story.

“Now I must tell you my reason for going to India.

“In the years 1906-12 I lived in Paris, where I was very intimately befriended with Paul Richard, who in 1910 went to India as a candidate for the chambre de députés, for the French colonies. During this trip he made the acquaintance of Aurobindo, who at that time or shortly after started a monthly magazine: ARYA, that was published in a French and an English edition. It was agreed that I should come to India to help him in this task, and early in the summer of 1914 everything was ready for my departure for Pondicherry to join Mr. Richard, who had returned thereto after having failed to be elected as a député. Then came the war and postponed my departure for nearly a year. At last in the spring of 1915 I was able to start, but at the same time Mr. Richard had to leave India for doing military service in France. For this and other reasons the editorial project had to be given up so far as I was concerned. Still I went on and made the acquaintance of Aurobindo, introduced by Mr. Richard, and made his portrait. Shortly after I left Pondicherry and was arrested, as above said.

“As to the kind of conversation I had with him it is impossible to me, after so long time, to give you any detailed record. They treated religious and moral topics, and my impression of him was that of a very wise and noble spirit. Of the mystical experiences you say he went through at that special epoch he gave no direct evidence, but of course it was felt through his acts and words. Later I wrote a book YOGA, which I dedicated to him and that for a great part is based on the entertainments [perhaps from the French term ‘entretiens’ meaning conversations] I had with him. As a model he was excellent and most obliging.

“Now for the picture of which I send you a photo by the same mail. An unretouched photo, as you may know, never gives an exact impression of the original. The picture is darker than it appears in the photo, deeper and warmer in colour. The brush strokes and the many small lines that look like a network especially in the face, hair and beard are due to rugosities [roughness or coarseness?] in the colour surface and are not seen in the original. The size of the canvas is 80 x 60 cm. The picture is known by Madame Mirra Richard, née Alfassa, who saw it in France at my return journey and who, as I understand, is still in Pondicherry. She liked it very much and certainly still remembers it and can tell you about it.

“This is what I can tell you concerning this matter. I hope it will be sufficient… 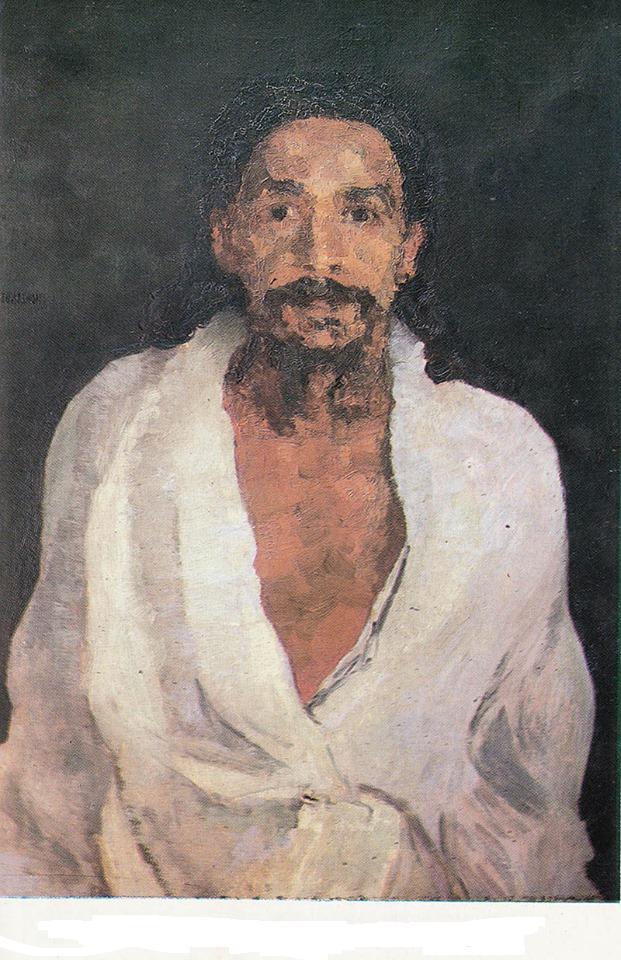 Johannes Hohlenberg wrote the following after meeting Sri Aurobindo for the first time:

“He received me on a big overshadowed verandah which was open to the one side. The furniture there was extremely simple. There was a table with three chairs around it. On the bare and naked whitewashed walls were a pair of Japanese mats or rugs hanging. Below the ceiling were some garlands of dried mango-leaves… One of the young men led me up to the verandah and I waited there for some minutes. Suddenly, it seemed that I was not alone in the space and turned around to see him standing just in front of me. He had soundlessly entered from a threshold. I looked into an extraordinarily beautiful face. He had a finely chiselled forehead framed with mahogany hair falling down over his shoulders. The eyes were dark with flashes of sienna-terra light. A decisively shaped sharp nose and unusually defined lips that were full and sensuous. A thin black beard fell below the throat. He was dressed in a kind of white cotton robe with a length thrown over his shoulder on one side. The robe was open in the front to the bare chest. He had naked slender feet lightly touching the floor. It was late afternoon with a hint of dusk in the air. The light gave his olive skin a transparency as if it were self-illuminating. When I shook hands with him I could not help becoming self-conscious how his golden arm contrasted with my own red-grey-white European skin. My own body beside his standing there seemed like it had been scrubbed by some abrasive cleanser and washed of natural color. Bleached to the bone. We sat down and began to talk in French and English. Both languages were equal to him. It was amazing to hear him quote Homer one moment and then the Vedas or Shakespeare. It was as if he belonged to all worlds and cultures at once… But this was only one side of his personality. Another seemed to live in infinity. I seemed to sometimes notice a slight hint of a smile on his face when he saw my amazement at his penetrating words. It was like I had been shot through the heart and mind.”