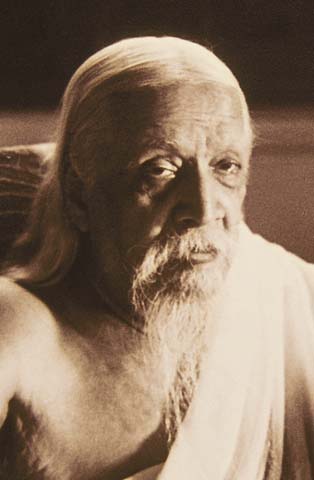 An Unusual Darshan of Sri Aurobindo

At the beginning of June 1947—the date may be 4th or 5th—I was inspired (so I would say now) to see Sri Aurobindo. I waited for a second and then went up to Pavitra’s room. Nobody was there. I moved on to the passage leading from it towards Sri Aurobindo’s room. Mrityunjaya was standing outside the room where the Mother used to spend some time during the day. He caught hold of me. I had a short struggle with him, but I broke free.

Thus I moved on to Sri Aurobindo’s room. Sri Aurobindo was sitting on his bed. I stood, respectfully, at a distance. He told me—not by spoken word but mentally—that the Mother’s permission was necessary for coming and seeing him; and he gave a hint on my sadhana. This must have all taken not more than a minute.

Then I went down by the staircase near Amrita’s room. The Mother was giving “Blessings”. I went towards Nolini’s room. I had some yellow “Service” flowers, from which I selected five or six to offer to the Mother. When my turn came to go to her, I gave them into her hand. I have the recollection that the Mother said something like: “You should be obedient.”

I bowed and moved away from there.

Here is the sequel from Mrityunjaya. When Indubhai broke free from him and went in the direction of Sri Aurobindo’s room, Mrityunjaya felt he should follow him to see what was happening. On reaching Sri Aurobindo’s door he saw the Master. It was a serenely magnificent sight. But nobody else was found. Mrityunjaya had not been quick enough. Now he went down the staircase to the Meditation Hall. There he saw Indubhai bowing to the Mother. So he went up again and waited for the Mother to come up after the “Pranam.” On meeting her he told her of what had happened. She said: “He was very restless.” Then, with a smile, she added: “So you too had a darshan of Sri Aurobindo!”

13 Replies to “An Unusual Darshan of Sri Aurobindo”