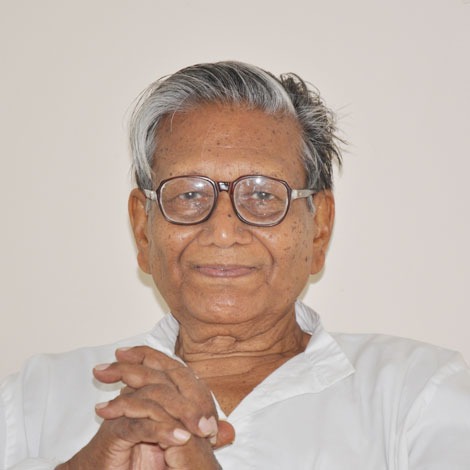 26th January 2020 has brought to us the delightful news that legendary author, senior inmate of Sri Aurobindo Ashram, Pondicherry and respected member of Overman Foundation, Shri Manoj Das has been conferred with the prestigious ‘Padma Bhushan’ for his contribution in the field of literature and education.

Born on 27 February 1934 to Madhusudan Das and Kadambini Devi in Sankhari, a remote coastal village of Odisha, India, Manoj Das grew up amidst loving rural folks and Nature’s splendours but also had the horrific experience of a devastating cyclone followed by famine crushing his locality. At the age of eight he stood witness to his affluent home on the sea being plundered by savage gangs of bandits, not once but twice.

In town for study, writing came to him spontaneously and his first book in Odia, Satavdira Artanada, was published when he was fourteen. At fifteen he launched Diganta, which, in course of time, grew into a significant literary journal in the state. In search of some panacea for human suffering he became a revolutionary youth leader while in college, leading several agitations, courting jail, becoming unopposed President of the University Law College Union, General Secretary of the Students Federation and playing an active role in the Afro-Asian Students Conference at Bandung, Indonesia, in 1956.

His quest, however, led him to mysticism and, after serving as a lecturer in English at Cuttack for four years, he, along with his wife, Pratijna Devi, a scion of the Raj family of Kujang whose parents were renowned freedom fighters, joined the Sri Aurobindo Ashram at Pondicherry in 1963 which became their permanent abode.

Though outside his home state he is widely known as one of the best-loved and serious among the Indian writers writing in English, he is also probably the foremost successful bilingual writer in the country. He had been a regular columnist on literary and cultural themes for some of the major newspapers in India such as The Times of India, The Hindustan Times, The Hindu and major Odia dailies.

He was the editor of a prestigious monthly commanding an international circulation, The Heritage (1985-1989) published by the Chandamama Publications of Chennai and an author-consultant to the Ministry of Education, Government of Singapore (1981-1985), visiting the island nation twice a year for taking classes of a hundred teachers.

His research in the archives of London and Edinburgh in 1971 brought to light some of the significant glimpses of India’s struggle for freedom led by Sri Aurobindo in the first decade of the 20th century. He received the first Sri Aurobindo Puraskar for this pioneering work, offered by Sri Aurobindo Bhavan, Kolkata (the birth place of Sri Aurobindo), supported by the Government of West Bengal.

The numerous accolades he has received include India’s national award for creative writing—the Sahitya Akademi Award, the Odisha Sahitya Akademi Award (twice), the Sarala Award, the Sahitya Bharati Award (by now Odisha’s premier award that began with honouring him), the Bharatiya Bhasha Parishad (Kolkata) Award, The BAPASI (Booksellers and Publishers Association of South India) Award as the best writer in English in the South for the year 1998 and Rotary’s ‘For the Sake of Honour’. The Odisha Sahitya Akademi also bestowed on him its highest honour, the Atibadi Jagannath Das Samman.

He was the leader of the Indian Writers’ Delegation to China in 2000.

The President of India decorated him with the Padma Shri Award on the Republic Day, 2001. This was followed by India’s most prestigious award for literature, the Saraswati Samman. Utkal Sahitya Samaj, the hoary literary organization of his home state, Odisha, bestowed on him Utkal Ratna. While one university made him its honorary Professor Emeritus, the Utkal University of Culture chose him alone to be conferred with D.Litt. (Honoris Causa) in its very first convocation. That was followed by four other universities awarding him honorary D.Litt. including the oldest university of his home state, the Utkal University and his alma mater, the Ravenshaw University.

The Sahitya Akademi, our national academy of letters, has conferred on him its highest honour, Fellowship, which, according to its constitution, is “reserved for the immortals of literature”. Lately he received the NTR National Literary Award conferred by the NTR Vigyan Trust, Hyderabad, as an outstanding Indian writer in May 2013 and in October 2013 he was awarded the Amrita Keerti National Award by the Mata Amritanandamayi Trust, Amritapuri, Kerala, on the occasion of the 60th birth anniversary of renowned mystic and philanthropist. In 2014 he was bestowed with the Samman Puraskar by Lala Diwan Chand Trust, New Delhi.

He is recognized as a competent interpreter of India’s literary and spiritual heritage. Of the numerous talks he has given under schemes such as the UGC-sponsored Extension Lectures at different universities or literary, educational or spiritual fora in India and abroad, mention can be made of a few:

He was chosen to deliver the first UNESCO lecture organized by the Department of Education, Ministry of Human Resources Development, Government of India in 1998 at the National Museum Auditorium at New Delhi. He was invited to deliver the first Sri Aurobindo Memorial Lecture instituted by the National Council of Educational Research and Training (New Delhi) at the Calcutta University, Presidency College Auditorium in 2008. He was invited to deliver Sahitya Akademi’s prestigious annual oration, the Samvatsar Lecture, at the Rabindra Bhavan auditorium at New Delhi in 2009. He was chosen to preside over the inaugural function of the 20th World Book Fair at New Delhi in 2012. He is one of those living writers on whom maximum number of scholars has done their doctoral theses either in English or in Odia.

His major works in English include Selected Fiction of Manoj Das (Penguin), Chasing the Rainbow: Growing up in an Indian Village (Oxford University Press), A Tiger at Twilight and Cyclones, two novels clubbed together (Penguin), My Little India (National Book Trust) and The Bridge in the Moonlit Night and other Stories (National Book Trust). He is also one of the best-loved writers for children. While his Stories of Light and Delight, published in 1970, continues to be the largest selling story book for children in India till date, several other books for children like Books Forever, A Bride Inside a Casket, Legend of the Golden Valley, etc. are not lagging far behind.

Among his non-fictional works are a monograph on Sri Aurobindo published by the Sahitya Akademi on the 15th of August, 1972 and released in a function in New Delhi the same day by the then President of India, V.V. Giri in celebration of the Master’s Birth Centenary and Myths, Legends, Concepts and Literary Antiquities of India (Sahitya Akademi). His edited works include The Hour of God and other Selections from Sri Aurobindo (Sahitya Akademi) and Streams of Yogic and Mystic Experiences, a huge volume comprising treaties by about 40 scholars. This volume commissioned to him by Centre for Studies in Civilization, Ministry of Education, is much appreciated for the elaborate Introduction written by him.

Manoj Das is among those few living writers on whose life the Sahitya Akademi has produced a documentary film. About him, Ruskin Bond had once remarked, “There are only a few good story-tellers left in the world today and Manoj Das is one of them.” Dr. K. R. Srinivasa Iyengar had bracketed him in the art of short story with Rabindranath Tagore and Munshi Premchand.

We take the opportunity to congratulate Shri Manoj Das for being conferred with the prestigious ‘Padma Bhushan’.