Rabindranath Tagore (1861—1941) had once remarked to Dilip Kumar Roy: “Sri Aurobindo used to sweep us off our feet in those unforgettable days. His articles and exhortations, his visions and aspirations, his flaming speeches and reckless courage did electrify Bengal.” (Pilgrims of the Stars, pp. 79—80)

As the concluding installment of our special series on Sri Aurobindo the complete text of the poem Namaskar (Salutations), which Tagore had penned on Sri Aurobindo when the latter was imprisoned for the first time in August 1907 on charges of sedition, has been uploaded in the online forum of Overman Foundation. Along with the facsimiles of the poem in Tagore’s handwriting and the page of the 5 September 1907 issue of the Bande Mataram journal where the poem had appeared for the first time, the English translation of the poem made by Justice Ksitish Chandra Sen have also been published in the online forum

We take the opportunity to thank Shri Joydeep Banerjee for providing us with the facsimiles of the poem in Tagore’s handwriting. 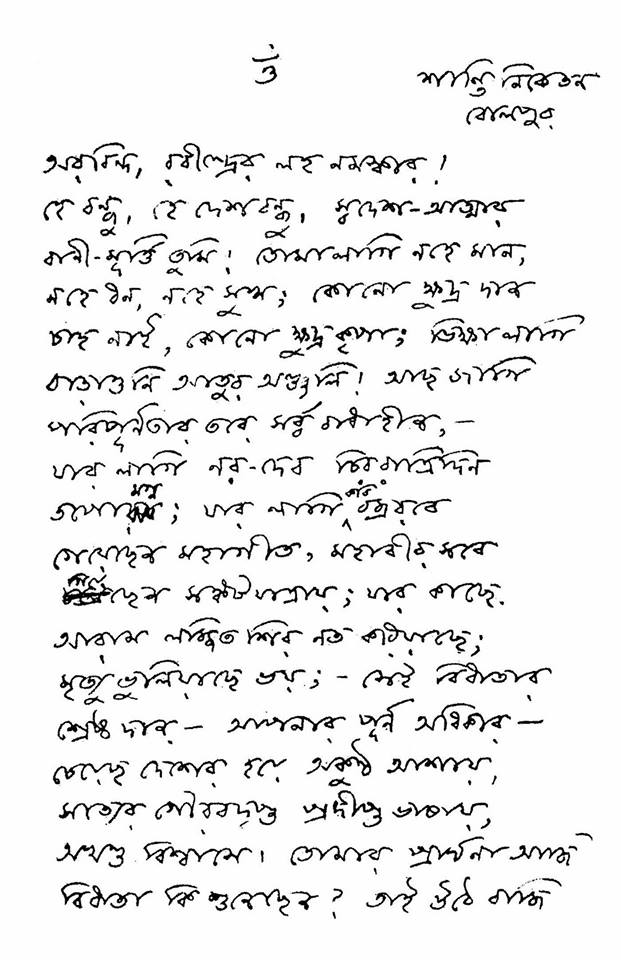 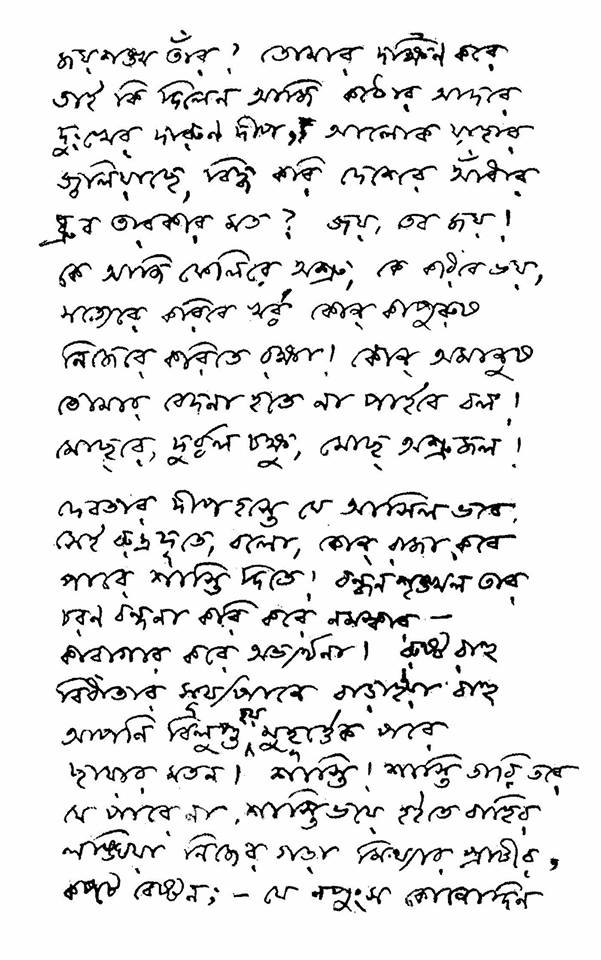 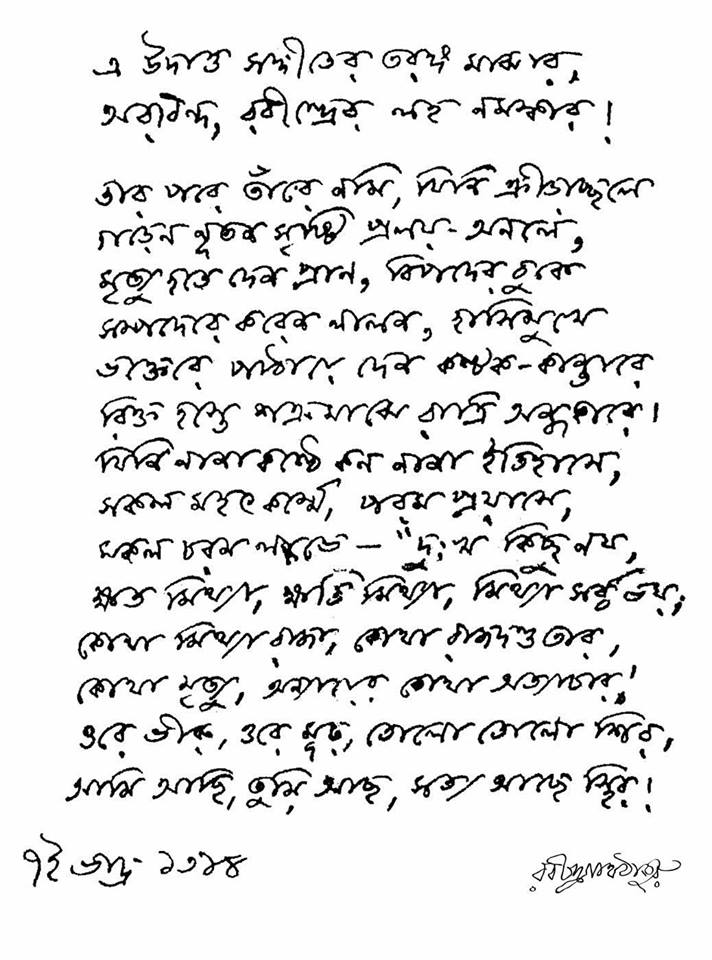 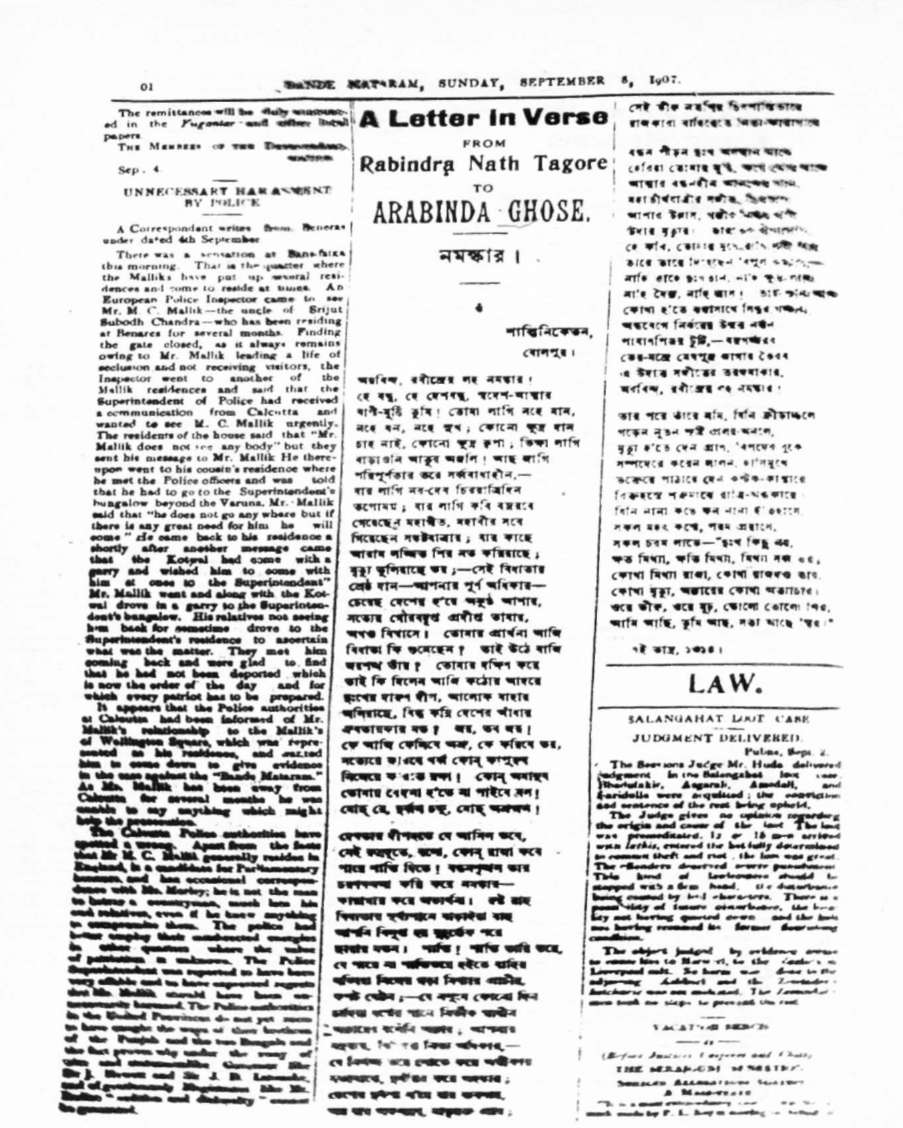 Rabindranath, O Aurobindo, bows to thee!
O friend, my country’s friend, O voice incarnate, free,
Of India’s soul! No soft renown doth crown thy lot;
Nor pelf or careless comfort is for thee; thou’st sought
No petty bounty, petty dole; the beggar’s bowl
Thou ne’er hast held aloft. In watchfulness thy soul
Hast thou e’er held for bondless full perfection’s birth
For which, all night and day, the god in man on earth
Doth strive and strain austerely; which in solemn voice
The poet sings in thund’rous poems; for which rejoice
Stout hearts to march on perilous paths; before whose flame
Refulgent, ease bows down its head in humbled shame
And death forgetteth fear; — that gift supreme
To thee from Heaven’s own hand, that full-orb’d fadeless dream
That’s thine, thou’st asked for as thy country’s own desire
In quenchless hope, in words with truth’s white flame afire,
In infinite faith, hath God in heaven heard at last
This prayer of thine? And so, sounds there, in blast on blast,
His victory-trumpet? And puts he, with love austere,
In thy right hand, today, the fateful lamp and drear
Of sorrow, whose light doth pierce the country’s agelong gloom,
And in the infinite skies doth steadfast shine and loom,
As doth the Northern star? O Victory and Hail!

Where is the coward who will shed tears today, or wail
Or quake in fear? And who’ll belittle truth to seek
His own small safety? Where’s the spineless creature weak
Who will not in thy pain his strength and courage find?
O wipe away those tears, O thou of craven mind!
The fiery messenger that with the lamp of God
Hath come—where is the king who can with chain or rod
Chastise him? Chains that were to bind salute his feet
And prisons greet him as their guest with welcome sweet,
The pall of gloom that wraps the sun in noontide skies
In dim eclipse, within a moment slips and flies
As doth a shadow. Punishment? It ever falls
On him who is no man, and every day hath feared,
Abashed, to gaze on truth’s face with a free man’s eye
And call a wrong a wrong; on him who doth deny
His manhood shamelessly before his own compeers,

And e’er disowns his God-given rights, impelled by fears
And greeds; who on his degradation prides himself,
Who traffics in his country’s shame; whose bread, whose pelf
Are his own mother’s gore; that coward sits and quails
In jail without reprieve, outside all human jails.
When I behold thy face, ’mid bondage, pain and wrong
And black indignities, I hear the soul’s great song
Of rapture unconfined, the chant the pilgrim sings
In which exultant hope’s immortal splendour rings,
Solemn voice and calm, and heart-consoling, grand
Of imperturbable death, the spirit of Bharat-land,
O poet, hath placed upon thy face her eyes afire
With love, and struck vast chords upon her vibrant lyre,—
Wherein there is no note of sorrow, shame or fear,
Or penury or want. And so today I hear
The ocean’s restless roar borne by the stormy wind,
Th’ impetuous fountain’s dance riotous, swift and blind
Bursting its rocky cage, — the voice of thunder deep
Awakening, like a clarion call, the clouds asleep
Amid this song triumphant, vast, that encircles me,
Rabindranath, O Aurobindo, bows to thee!

And then to Him I bow Who in His sport doth make
New worlds in fiery dissolution’s awful wake,
From death awakes new life; in danger’s bosom rears
Prosperity; and sends his devotee in tears,
’Mid desolation’s thorns, amid his foes to fight
Alone and empty-handed in the gloom of night;
In divers tongues, in divers ages speaketh ever
In mighty deed, in every great endeavour
And true experience: “Sorrow’s naught, howe’er drear,
And pain is naught, and harm is naught, and naught all fear;
The king’s shadow, — punishment is but a breath;
Where is the tyranny of wrong, and where is death?
O fool, O coward, raise thy head that’s bound in fear,
I am, thou art, and everlasting truth is here.