On Friday, 3 March 2017, the Aurobindonian community of Pondicherry lost a bright jewel with the passing away of Ratna Chakrabarti at the age of seventy-five. The word “Ratna” means jewel and she, indeed, lived up to her name.

Born in Kolkata on 28 July 1941 to Santosh Kumar Chakrabarti and Bokul Rani, Ratna received her early education in Arambagh Girls School. Afterwards she joined the Mahakali Balika Vidyalaya and Howrah Girls College and passed her matriculation examination in 1956.

Santosh Kumar Chakrabarti had an illustrious career in the judicial service and held distinguished posts of District and Sessions Judge (in Darjeeling), Legal Remembrancer, Chief Justice of City Civil Court of Kolkata and retired as the Judge of the High Court of Kolkata in 1972. But his heart was seeking the light of spiritual Knowledge. His inner quest brought him to Pondicherry in 1951. He found in the Mother the pole-star his heart was looking for. He visited Pondicherry twice again in 1953 and 1956 in the month of October when he came with his wife, three daughters (Ratna, Krishna and Rina) and son Subir. Interestingly, Ratna had visited Pondicherry in May 1956 with another group of visitors. The serene atmosphere of Sri Aurobindo Ashram and the aura of the Mother created a profound impact on Ratna and her sisters. As a result, they expressed their eagerness to join the Sri Aurobindo International Centre of Education (which, at that time, was known as the Sri Aurobindo International University Centre) as students. The Mother welcomed them to the Ashram School. A year later she also accepted Subir—who joined the Ashram School as a student—and Bokul Rani as inmates of the Ashram. Santosh Kumar, who would visit Pondicherry from time-to-time, joined the Sri Aurobindo as an inmate soon after his retirement in 1972.

Having completed her school education in 1963, Ratna joined the Sri Aurobindo International Centre of Education with the Mother’s approval as a teacher of History, Sanskrit (which she had learnt from Indu Roy and Jagannath Vedalankar) and Music. She served the institution for more than fifty years. Her teaching capability was appreciated by the Mother who once described her as a ‘very good teacher’. To the Mother, she was known as the ‘tall girl’. Nolini Kanta Gupta too was extremely affectionate towards Ratna. On certain days, in the Meditation Hall situated on the ground-floor of the Ashram Main Building, he would read out his recent writings to a group of selected individuals who were known as his ‘inner circle’. Ratna was a part of this selected group.

Ratna learnt music—which remained her grand passion throughout her life—from the legendary Sahana Devi and Tinkori Bandopadhyay. She also received lessons in Indian Classical music from Shirin Shroff, a Parsi inmate of the Ashram. She was blessed with a voice that was divinely melodious so much so that it could take her audience to the highest layer of intense delight. Sunil Bhattacharya, the noted music composer of the Ashram known for his immortal Savitri music and New Year Compositions who had chosen Ratna, Ravibala and Minnie Ganguly to sing in his compositions, had once remarked that Ratna possessed ‘a wonderful voice’. Champaklal, the lifelong servitor of Sri Aurobindo and the Mother who was also an admirer of Ratna’s devotional songs, had once invited her to sing in Sri Aurobindo’s room. The song which she had rendered in the Lord’s Apartment was Ami sob chere Ma dhorbo tomar ranga charan duti, a noted Shyama Sangeet (devotional songs dedicated to Goddess Kali) in Bengali. She considered this grand privilege to be the greatest gift she had ever received. On another occasion, she had sung in a soiree organized by Narad near the Samadhi and was heard by the Mother. She had also sung in several compositions of Shobha Mitra, the great maestro of Sri Aurobindo Ashram. A CD of her songs in Bengali titled Geetiratna was released in 2015.

Despite possessing an artistic heart and soul, Ratna excelled in sports as well. She played basketball and throw-ball quite well. She was also known for her impeccable embroidery work. Once she had embroidered and gifted a lap-cloth to the Mother. She was a remarkable cook as well who found delight in feeding others with motherly love and affection. She often cooked for the students of Corner House. Though she was soft and loving by nature, she would not hesitate to raise her voice against any act of injustice.

Ratna continued to teach in the Sri Aurobindo International Centre of Education till the first half of 2015 when her failing memory compelled her to retire. But she continued to teach music to her students who flocked to her house. She was later shifted to Desirée Home —a sea-facing building where the senior and ailing inmates of Sri Aurobindo Ashram are looked after—where she took singing classes every day at 5 p.m. Her music brought new life to the residents of Desiree. For instance, one gentleman who could not speak had started to sing as a result of Ratna’s soirees. Her doctor had remarked that humorously that she was a staff-member of  Desirée Home who helped others to recover through music-therapy.

On Thursday, 2 March 2017, Ratna developed fever. She was taken first to the Ashram Nursing Home and then to JIPMER (Jawaharlal Institute of Postgraduate Medical Education and Research). Some complications in her heart were observed in the ECG report but the physicians opined that there was nothing to worry. On that very day she was shifted to the General Hospital.

On Friday, 3 March, at 8.30 a.m., Ratna had a talk with her doctor over the phone. She said that she was all right and there was no reason for her to stay in the hospital. She also added that she wanted to go to the Ashram. Half an hour later, at around 9 a.m., when Krishna went to meet Albert Patel, the erstwhile Trustee of Sri Aurobindo Ashram Trust and the seniormost member of the Ashram, the former requested him to give her a blessings packet for Ratna. Usually, Albert Patel’s pockets are always full of blessings packets but on that day, surprisingly, he had none. Krishna found a blessings packet in her bag and she requested Albert to give it to her for Ratna. Albert did so. This happened around 9.05 a.m. Two minutes later at 9.07 a.m., Ratna silently passed on to the Beyond. A senior inmate of the Ashram had remarked that she left after receiving the blessings packet subtly.

Ratna Chakrabarti always strived not to disturb anyone and she left without disturbing a soul. She will continue to live and radiate in our hearts like a bright jewel who had consecrated her all to the Divine. 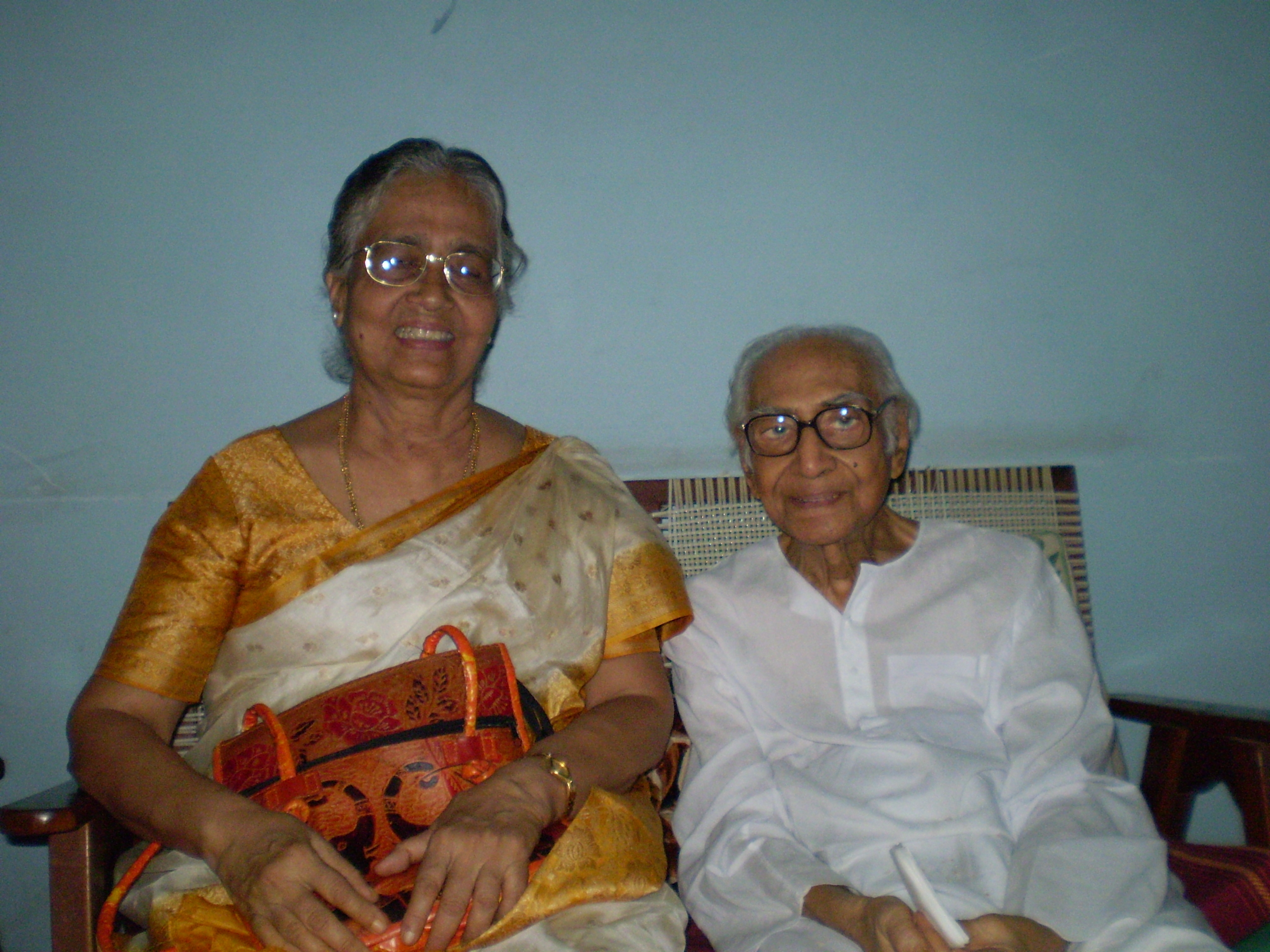 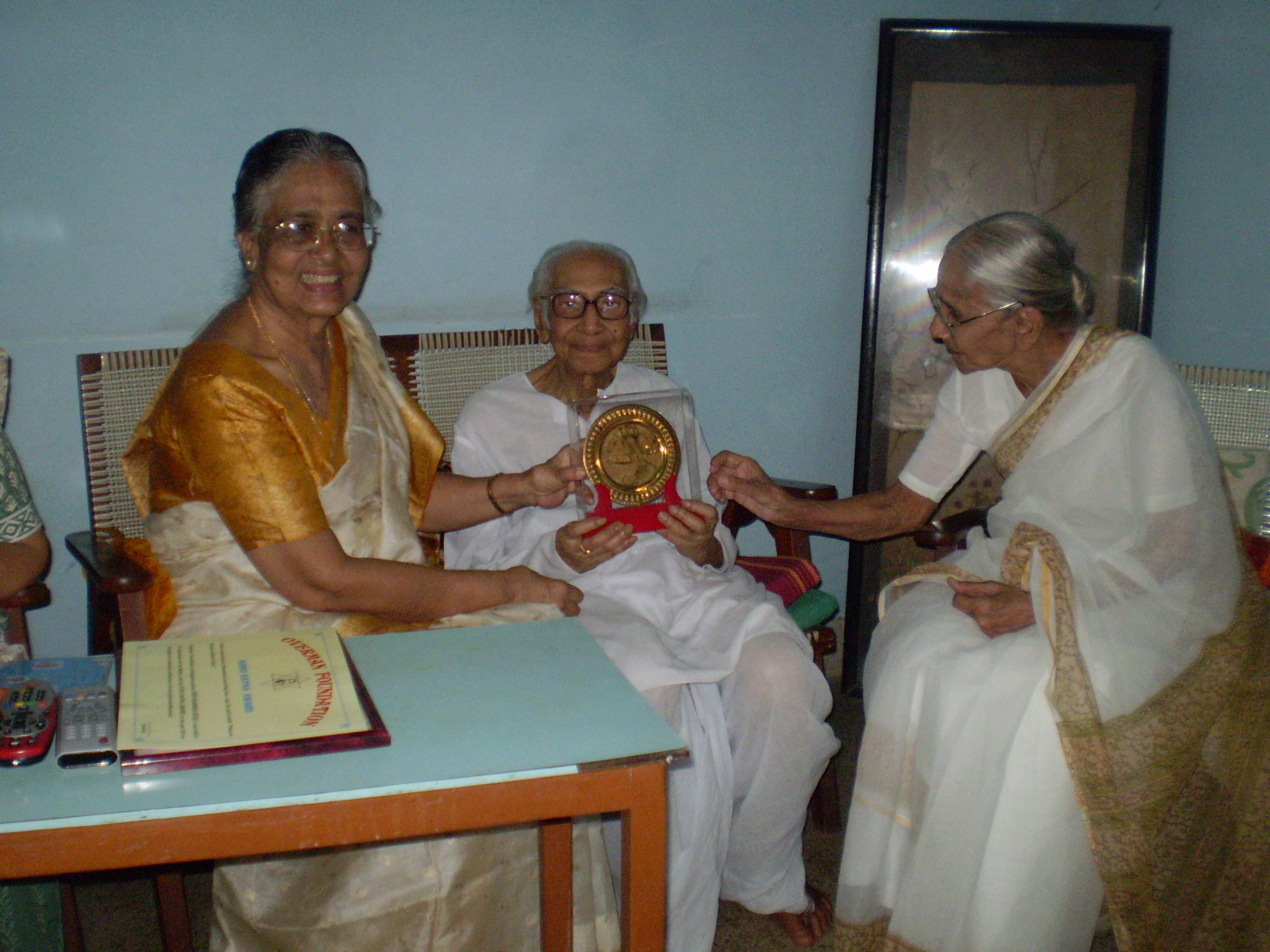 Presenting Arabinda Basu with the First “Auro-Ratna Award” in 2010 with Suprabha Nahar. 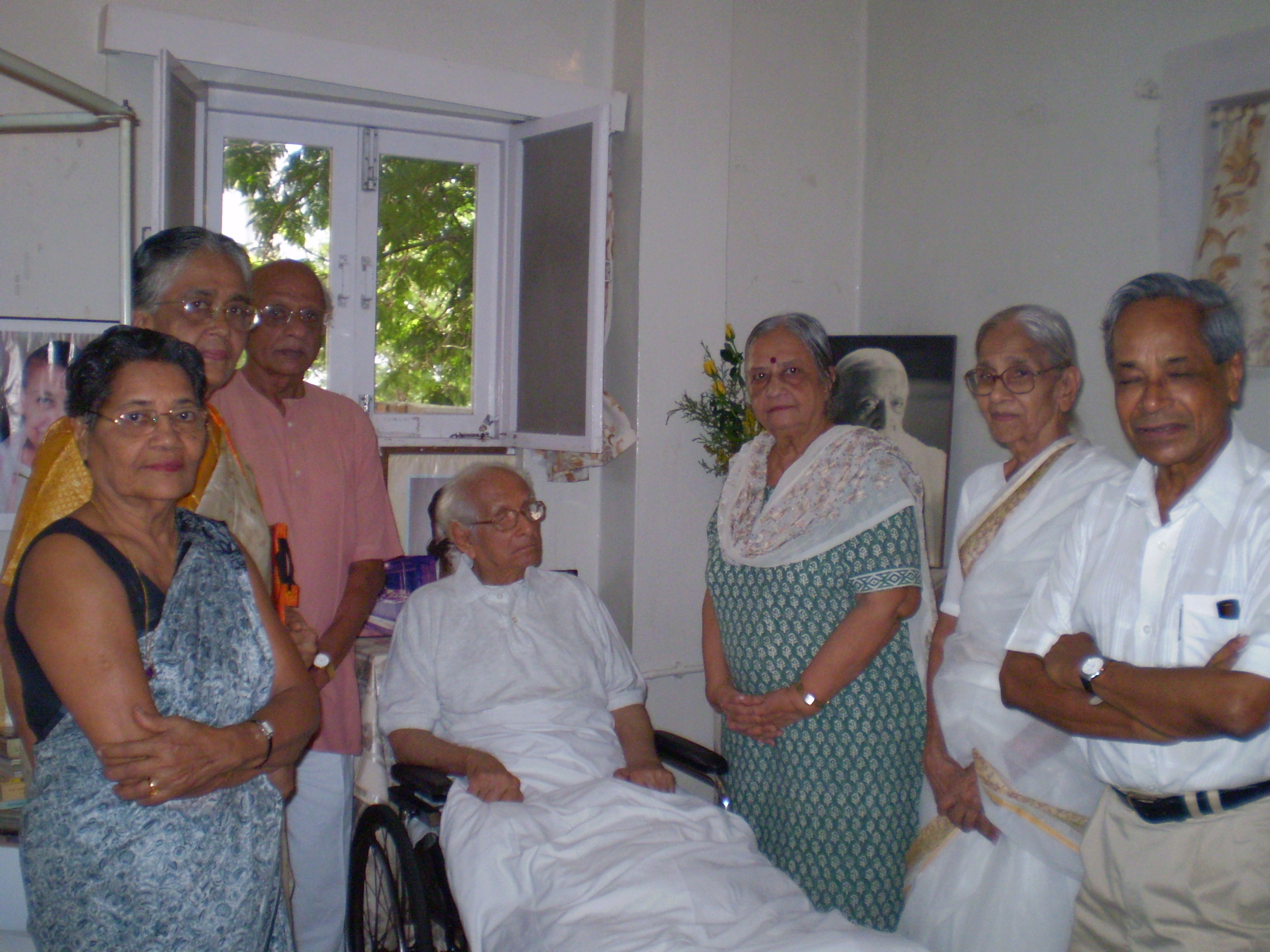 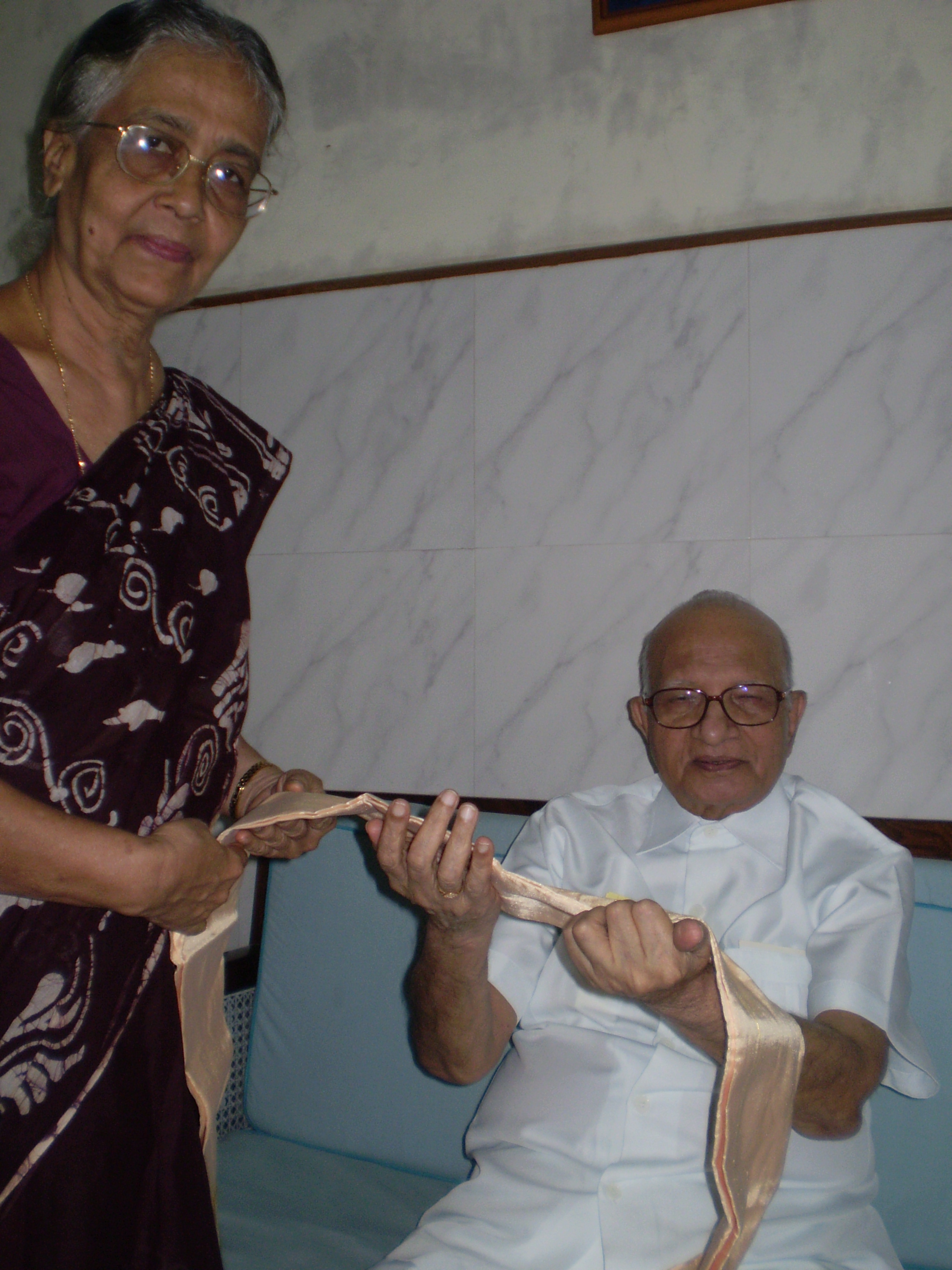 With Dr. Kireet Joshi during the Second “Auro-Ratna Award” ceremony in 2011. 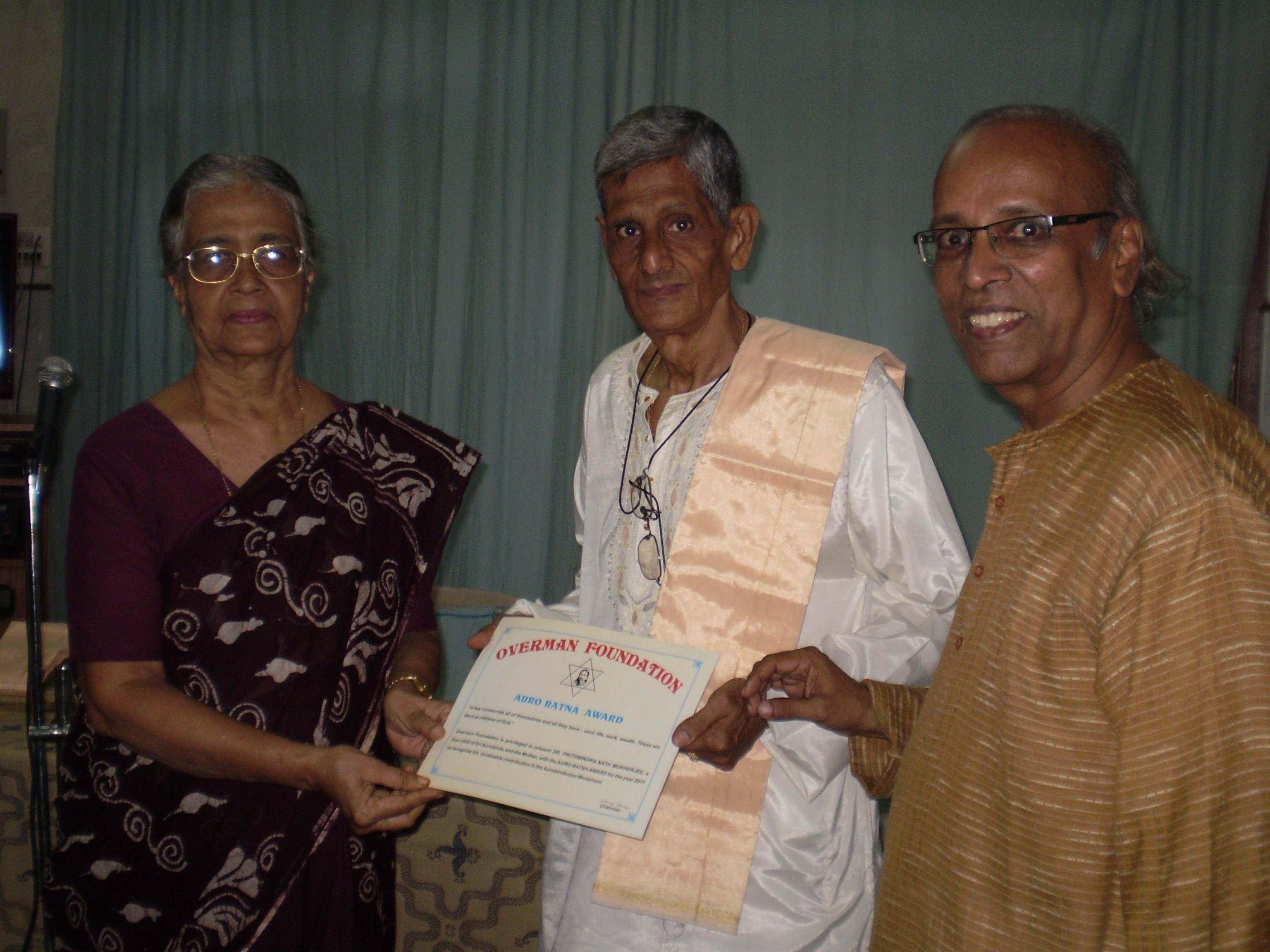 With Dr. Ananda Reddy and Togo Mukherjee at the Second “Auro-Ratna Award” ceremony.

With Arabinda Basu at a musical soiree organized at his residence in October 2010. 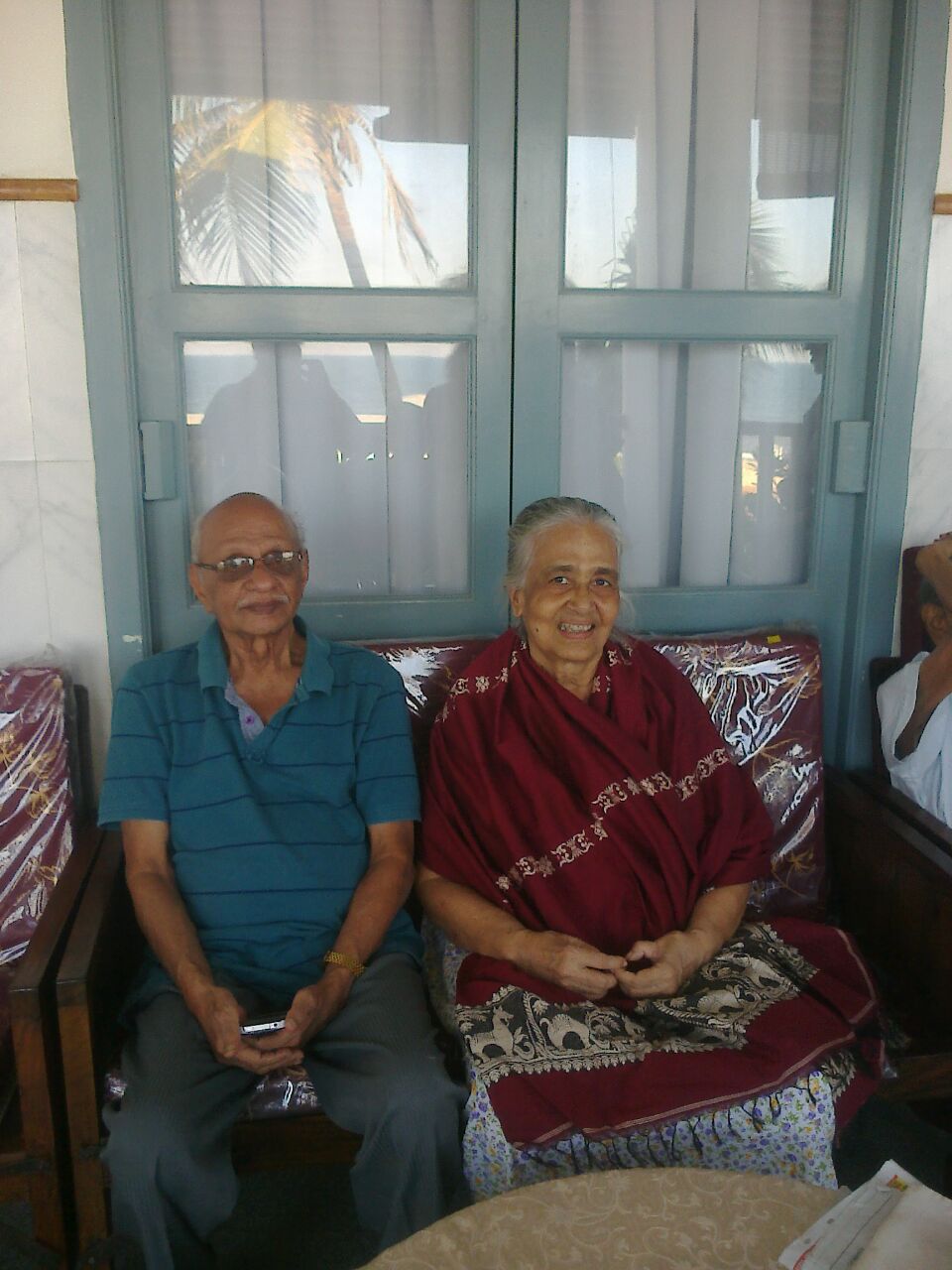 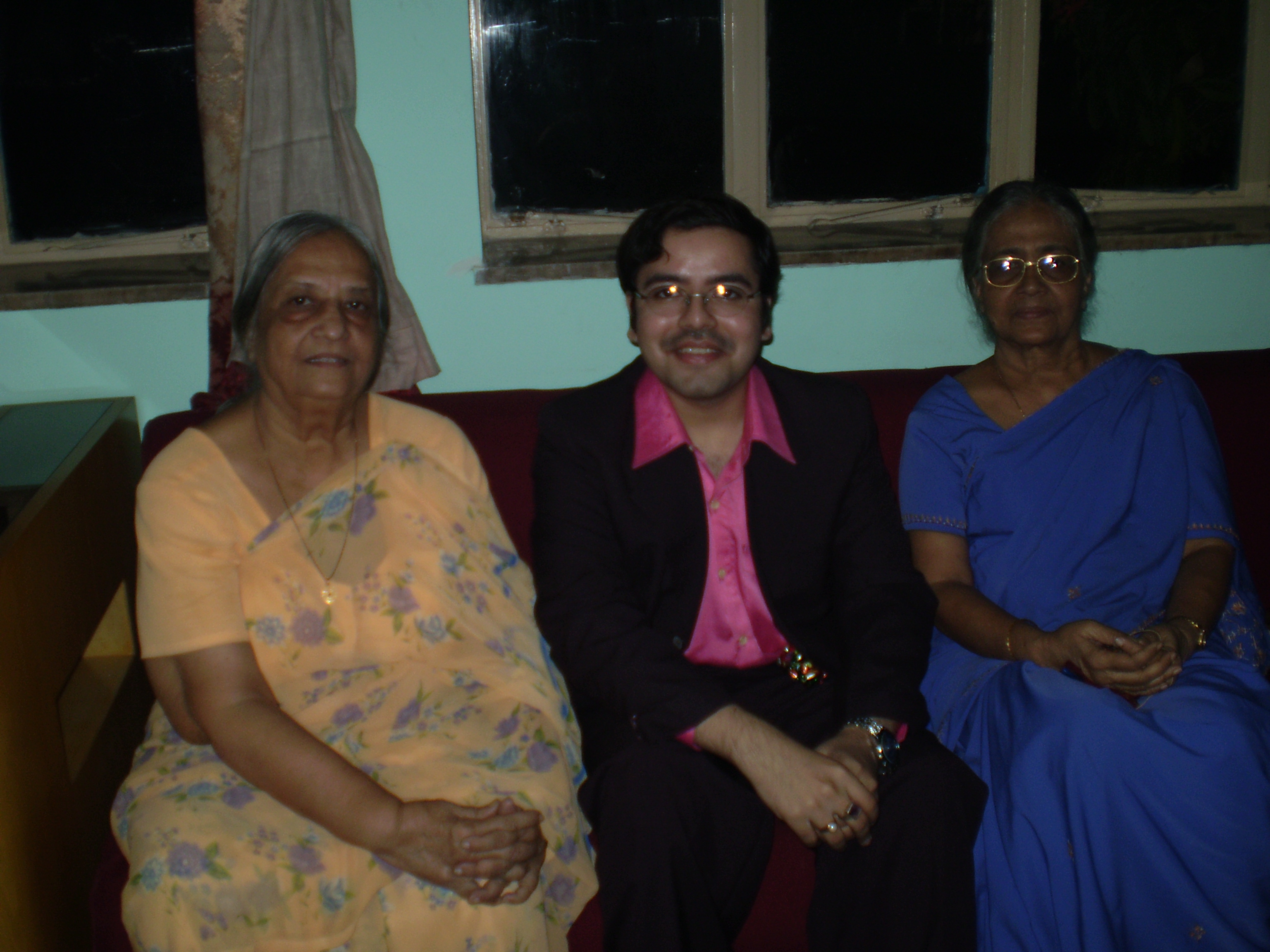 With Krishna Chakrabarti and Anurag Banerjee.

6 Replies to “Ratna Chakrabarti: In Memoriam by Anurag Banerjee”