On 9 December 1950, Sri Aurobindo’s physical sheath was put to rest in the Samadhi vault.

We take this opportunity of sharing with you the reminiscences of Nirodbaran and Udar Pinto and some photographs of Sri Aurobindo’s last journey.

‘When the Mother saw that I was protesting so strongly about placing Sri Aurobindo’s body in the Samadhi, She took me by the hand and led me to His body, then asked me if I could still see the golden light that had been there all these days. I had to admit that it had gone. Then the Mother said that it was because Sri Aurobindo Himself had given the sign to Her that it was now time to bury His body. I had to accept this and the burial was fixed for the evening of the 9th.

‘When the rosewood case was ready, we had the inner sides lined with pure silver sheets and over them a white satin covering was put. Cushions were placed on the bottom of the case.

‘On the morning of the 9th, Mother decided that the body would be put into the Samadhi already prepared. The body was placed in the casket and covered with a bed sheet but the face was uncovered. The Mother stood over it and concentrated for quite some time in order, as She explained to us afterwards, to free the physical body from the subtle body and other conscious parts of the being that normally continue to stay with a body for several days after death.

‘Then Mr. R.K. Tandon, the Indian Consul General at Pondicherry…was called in to witness the closing of the casket with the body of Sri Aurobindo inside.’[1]

‘On 9th December, the Light faded and signs of discoloration here and there were visible. Then, according to the Mother’s direction, the body was put into a specially prepared rosewood casket lined with silver sheet and satin and the bottom made comfortable with cushions. Sri Aurobindo’s body was wrapped in a gold-embroidered cloth. At 5 p.m. the body was carried by the sadhaks to the Ashram courtyard under the Service tree where a cement vault had been under construction from 5th December. Udar climbed down into the vault to receive the casket and put it in its proper position. As the box was lowered a friend of mine said that a prayer sprang spontaneously from his heart: “Now that you have gone physically, assure us that your work will be done.” Something made him look up at the Service tree and suddenly he saw against it Sri Aurobindo; his undraped upper body was of a golden colour. He said firmly with great energy and power in Bengali, “Habe, habe, habe”—“It will be done, it will be done, it will be done.” Then, as wished by the Mother, Champaklal came first to place a potful of earth upon the slate of the vault, followed by Moni, Nolini and other sadhaks. The ceremony was quiet and solemn. The Mother watched it from the terrace above Dyuman’s room. Hundreds of sadhaks stood in the courtyard in silent prayer and consecration.’[2] 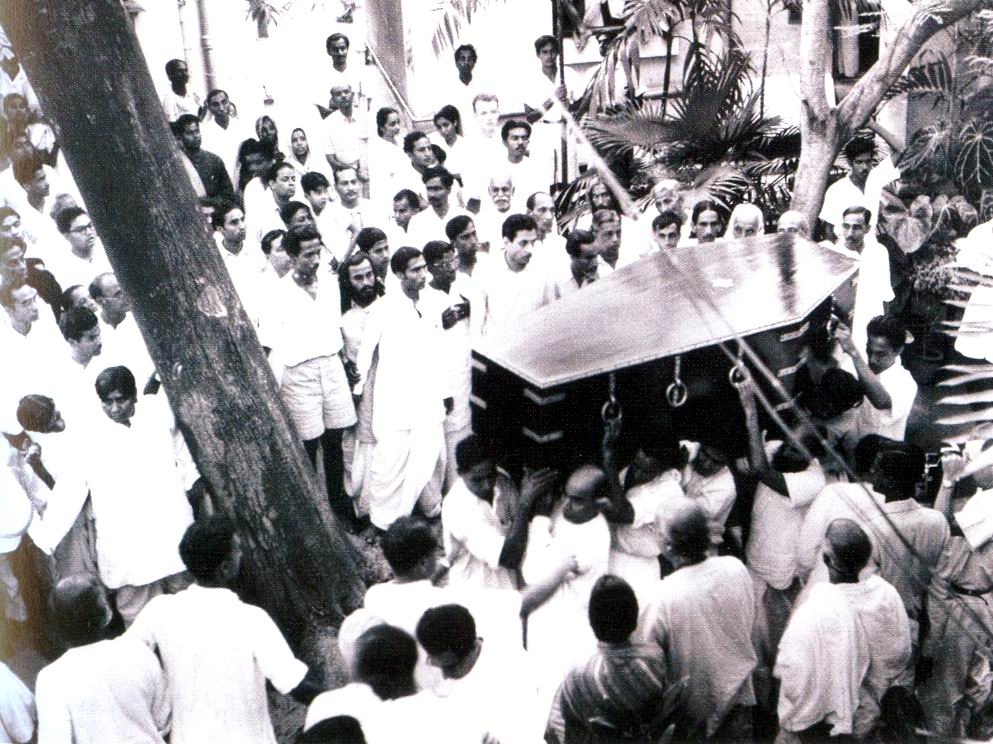