Sri Aurobindo married Mrinalini Devi (6 March 1887—17 December 1918), the eldest daughter of Bhupal Chandra Bose and Gopalkamini Devi in April 1901. During Sri Aurobindo’s imprisonment in connection with the Alipore Bomb Trial, Mrinalini Devi stayed with her parents at Shillong where she had the family of Ila Sen as her neighbours.

Ila Sen, wife of Nolini Kanta Sen and mother of Dr. Satyabrata Sen (Sri Aurobindo’s physician), Chitra Sen and Amita Sen (both senior inmates of Sri Aurobindo Ashram, Pondicherry) who taught Bengali in the early years of the Ashram School has shared her reminiscences of Mrinalini Devi (who was known as Minoo-di to her juniors) in an article which has been published in the online forum of Overman Foundation. Translated from the original in Bengali, this article reveals the author’s impressions of Mrinalini Devi during the period 1908-1909. 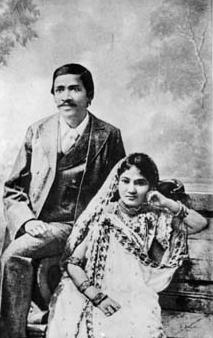 I saw her in my childhood, with the candid love of a tender soul. The sweetness of Minoodi’s character was incomparable—she had charmed the children’s minds with her selfless affection and by playing with them. Every evening boys and girls of our age gathered on the lawn of her family home and Minoodi would join in all our simple games including hide-and-seek. She would choose such unimaginable places for us to hide in that it would be very difficult for the “thief” to find us. Mixing thus with all, she had made for herself a special place in the world of our childhood-life.

This reminds me of a day when seeing that Minoodi had not yet come I went towards their sitting-room to look for her. At the sound of some conversation I peeped through the window to find the wife of the Magistrate sitting there with a cup of tea. She was requesting Minoodi to do something and then, a little shyly, Minoodi sat in front of the organ, played and sang a song by Tagore. I had never heard her sing like that before, so I simply stood there till the song was over. When I joined my friends that day the play was not so interesting, but I wasn’t very eager about it either. My mind was filled with the words and tune of the song I had heard.

There was a deep intimacy among all the Bengali families that then lived in the city of Shillong, playfield of Nature’s beauty. Nowadays such close feelings seem to be very rare indeed. It was in our neighbourhood, a few houses beyond ours, that Sj. Bhupal Chandra Bose, Minoodi’s father, lived. We had unlimited access to all these houses, and because Minoodi’s younger sister was of our age we came to know many things. That is how we first heard of Sri Aurobindo’s imprisonment. Feeling that Minoodi must have a deep grief in her, there grew in us a silent respect for her and we started observing her still more carefully. After Sri Aurobindo went to jail it was, for one and all, the only topic of discussion. Though we children did not quite understand the gravity of the situation, we were quite aware of it and imagined all sorts of things. We often wondered what this Personality must be—He who welcomed prison for the sake of his country. Every morning when father read the papers and explained all to my mother, I, under some pretext or other, stood there to listen to him. Among the ladies also, the talk went on—‘what a calm and steady girl this Minoo, never an expression of anxiety on her face.’

From the time of Sri Aurobindo’s imprisonment we never saw Minoodi in any showy dress: a broad black-bordered saree on her beautiful fair body, her dark curly tresses surrounding a pleasant smiling face. She also used to partake only of a vegetarian diet with her grandma. She would eagerly prepare many types of dishes, but never, even at the request of the elders, did she ever touch them. We had witnessed this so often—because whenever she saw us returning from school she would come and take us in and feed us with sweetmeats.

Their garden was a real wonder. Bhupal Bose, an officer in the Agricultural Department, had carefully made this garden a glory of beautiful flowers, fruits and vegetables. The bungalow-type house was surrounded below the windows by grape-creepers covering the walls. Here and there you would even spot a few bunches of grapes swaying in the breeze. On the veranda there was an apiary: a long wooden case with a small opening where the bees fluttered about—we spent hours curiously watching them. In the front garden there were innumerable flowers of varied shapes and colours.

When on Sundays, before sunrise, we used to go by their garden on our way to Prayer-meeting to listen to the chanting of hymns, we often saw Minoodi in her usual saree, her hair let loose and wearing wooden sandals, plucking flowers in the garden. She would then take them to the meditation-room. This was a beautifully decorated place of worship. Near the wall in the centre was a long bench, covered with white, where beside a statue of Kali were carefully placed the portraits of Sri Ramakrishnadev and Sri Saradamani. The perfume of incense and the beauty of flowers seemed to carry you to another world. To me this room bore a strange mysterious sign. I used to go there almost everyday. It was not very well ventilated as it stood between two rooms; there was just one window that opened to the garden, and this dimness increased its mysterious feeling. On the wall were arranged a few pictures of great saints. On one side hung a small picture of Vivekananda and on another, resting on a wooden shelf was a picture of Sri Aurobindo. Every day Minoodi stayed closed in this room, in silent worship for a long time. If I went in soon after her “Puja” I noticed fresh flowers beautifully arranged at Sri Aurobindo’s feet with incense still burning at the side. Knowing that it was the special offering of the one who had just left, I also would bow down to that unseen and unknown Greatness.

From far and near many people came to see Minoodi, to pay homage at her feet as to a mother. If she knew beforehand she never came out to meet them. But sometimes, when she was walking in the garden, unknown people just stepped in and without caring for any introduction simply bowed down at her feet—it must have been in remembrance of Sri Aurobindo… But could there have been no other reason? The extraordinariness, the simplicity of character that radiated from her beautiful face, was surely not common at all.

Thus it was we loved her in our children’s candour, without knowing about the joys and sorrows of the grown-up mind. We understood that there was a pain in her and from our hearts we gave her the sympathy that words cannot convey.

The news of Sri Aurobindo’s acquittal came when we were at school. How happy we were! Immediately all classes stopped and we ran to Minoodi’s house. The reason of this joy was surely the feeling—at last Minoodi’s sorrow was at an end…

Later when Sri Aurobindo left for Pondicherry, we often used to wonder why Minoodi did not join Him there. Much later we came to know that Sri Aurobindo had promised to send for her as soon as it was possible. Perhaps it was this waiting that had to be the sadhana of her life. Because, after years, when full of hope she at last left for Pondicherry, a sudden attack of influenza took her life within two or three days at Calcutta.

The soul that went through the hopes and fears of this short-lived existence, ever waiting for its Lord—would it not have come immediately to rest at His feet?

While studying the life of Sri Aurobindo many may have wondered about her, who had one day been His wife and companion. That place in which Sri Aurobindo had accepted her is by itself enough to introduce her specialness… But, sketched by the tender touches of my childhood, her memory remains in a halo of beauty, affection and simplicity, like the pure delicate fragrance of a cluster of white jasmine.