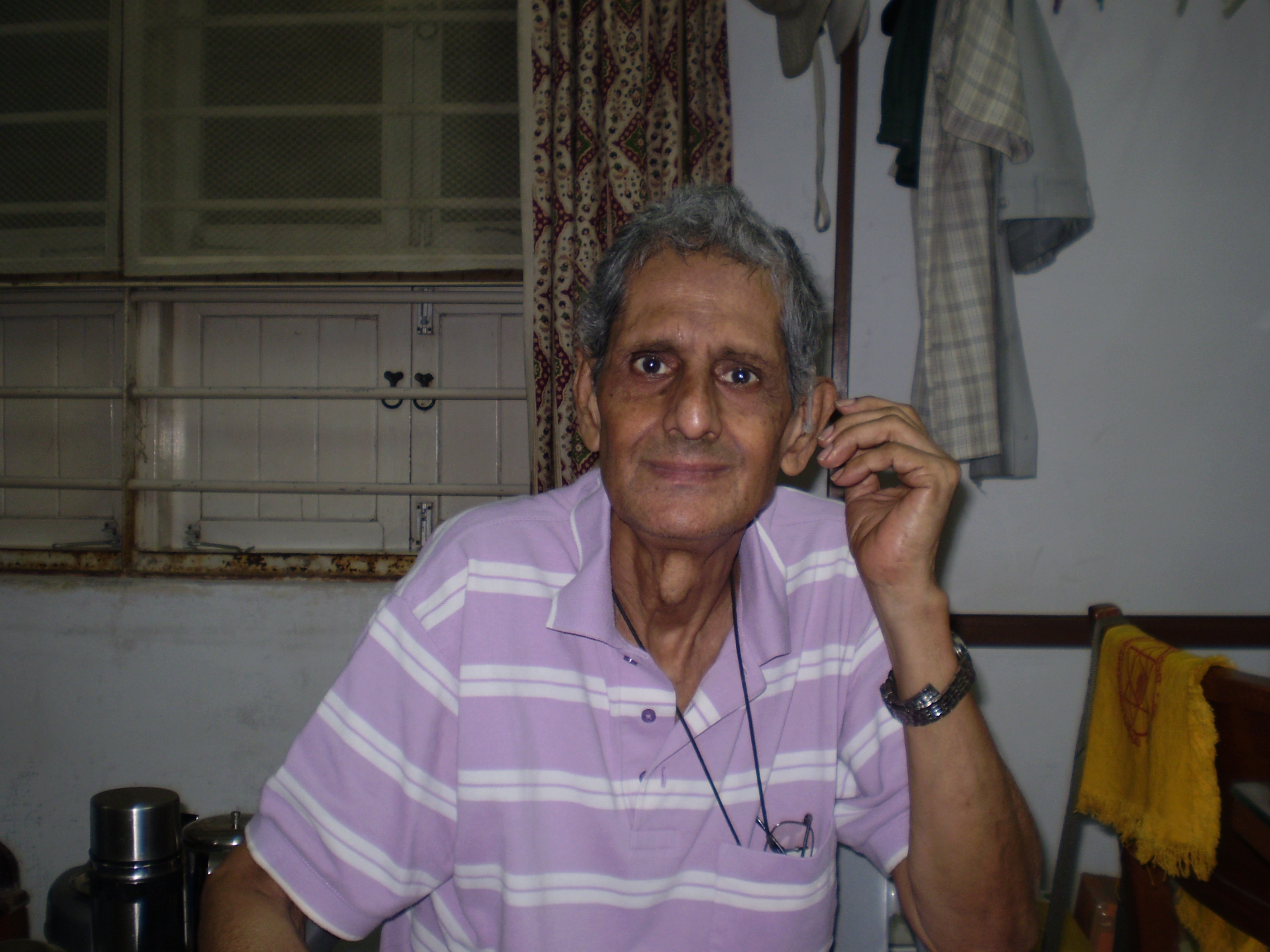 On Friday, 14 December 2012, at 4 p.m. Shri Dhritindranath Mukherjee, better known as Togo in the Aurobindonian community, has passed on to the Beyond three days after his seventy-fifth birthday. Born to Tejendranath (the eldest son of the famous revolutionary Jatindranath Mukherjee alias Bagha Jatin) and Usha Mukherjee on 11 December 1937, he visited Sri Aurobindo Ashram at Pondicherry at the age of ten with his parents and two elder brothers, Rothindranath and Prithwindranath in August 1948. Before he left for Pondicherry, he had told his chums that he would not return to Kolkata. The three brothers were so enchanted by the divine atmosphere of Sri Aurobindo Ashram that they decided to stay back at Pondicherry. Accordingly they went to the Mother and informed her about their wish to stay in the Ashram. Not only did the Mother approve of their wish but also asked Usha Mukherjee to stay back to look after them. Thus, in October 1948, Togo settled in the Ashram with his two brothers and mother. Tejendranath joined his family in the Ashram a year later.

Dr. Prithwindranath Mukherjee, Togo’s elder brother, writes about his name: “Admiral Togo Heihachiro (1848-1934) was known all over the world as “Nelson of the East”. He was especially appreciated for his leadership in the Russo-Japanese war (1904-05): Indian nationalists looked up on him as the Asian Hero who proved his superiority by defeating a European power. Okakura had come to Kolkata in 1902 with the message of a Pan-Asiatic unity; Nivedita introduced him to the founders of the Anushilan Samiti; he was received with due enthusiasm by Indian nationalists. Japan occupied a privileged place in their heart. Three years after the Admiral’s death, my brother Togo was born in 1937; he looked like a Japanese baby. Out of love for Japan, Swami Satyananda (Bhavabhushan Mitra, a disciple of my grandfather) proposed to name him Togo. My grandmother was still alive and she willingly accepted it. In the Ashram school, though he was enrolled as Dhritindra, the Mother—fond of Japan, too—preferred to call him Togo.”

Togo was good both in studies and sports. In December 1951 he received the first prize from the Mother in a competition of stamps; he had drawn the symbol of Sri Aurobindo and arranged the appropriate stamps in such a way that Sri Aurobindo’s concept of Involution and Evolution was beautifully described. He was considered to be the Ashram’s all-time best Malkhamb performer and had won the Mother’s praise and encouragement for his performance. In 1958 he won the Boys’ Grey Group boxing championship.

He also participated in the dance dramas held in the Ashram. Once the Mother selected him for the role of Durga’s lion and on another occasion he was chosen by her as Agni, the god of Fire. She gave him the roles of Shiva and Adi Shankaracharya in the dance drama “The Spiritual Destiny of India” (directed by the Mother) which was held on 1 December 1955. Pleased with his performance she had remarked to him: “You had embodied fully the true spirit of Shiva. All your gestures were full of power and elegance.”

After completing his studies at the Sri Aurobindo International Centre of Education, Togo joined Sri Aurobindo Ashram Hand Made Paper Department in December 1959. Soon the entire responsibility of the department was assigned to him and he remained its Incharge till 1967. In 1964 he was selected by the National Productivity Council for a prestigious French scholarship to study management in recognition for his outstanding achievement in the Hand Made Paper Department. He also played a significant role in re-organizing the Ashram Blanchisserie (Laundry). When the Ashram was attacked by a big mob on 11 February 1965 under the pretext of anti-Hindi demonstration, he defended the Ashram almost single-handedly and kept the attackers at bay till he was critically injured. He was hit by a steel lever on his head which fractured his skull.

The Mother has remarked about Togo in the following words:

“At 1 in the morning, I had to do another work, because one of our boys, T. [Togo] (that boy has the makings of a hero), almost single-handedly saved the clinic, but it cost him a fractured skull. At the time, they thought he was done for. They brought me the news, and when the news came I saw, I felt all of a sudden the other experience recede, and then that I was becoming the universal Mother with all the power of the universal Mother. And then, that T. became quite small, like this (gesture of something tiny in the hollow of the hand), and I held him in my hands—but he was all luminous, all luminous—I rocked him in my hands, telling him, “My child, my little child, my dear child…,” like this, and for several hours.

Shri Robi Gupta, noted poet and the youngest son of Nolini Kanta Gupta, had written the following poem on Shri Togo Mukherjee. Titled ‘Togo’, this poem was published in the May 1965 issue of ‘Mother India’, the monthly journal published from Sri Aurobindo Ashram, Pondicherry.

Bagha Jatin is but a legend to me.

For I have not witnessed his undaunted valour.

A firm stand against a hundred infuriated assailants.

He has proved well that the same blood runs in his veins!

The day was done and the night was unrolling the mantle of peace everywhere.

The Ashramites were all seated in deep meditation.

Opportunity golden indeed for the Devils to attack!

To force equality by death and devastation—what an ideal of perversity!

The enraged mob rushed close—hostile-instruments all athirst for blood!

The glasses clanged and the doors and hinges banged and fell broken!

The houses stood in fire and in a moment the dark sky turned red!

Deep in the heart man has blindly fostered the Devil to this day.

The messenger of heaven was burnt alive—the son of God crucified!

Ignorant minds cannot bear the pressure of the descending Light.

They mock and sneer seeking even to assail

As did the disturbing Rakshasas in the forests of the ancient Rishis.

Conscience seemed to be devoured by the Demon-head and Truth totally eclipsed!

Their motto: Better rule in hell than serve in heaven.

The powers of the earth, self-proud, fear the reign of gods.

The night saw not a sentry on duty, not a guard on his round.

They were all fast asleep with the magic spell cast by Demons.

How the phantoms of hell delight in destruction and laugh!

Freely they plundered, rained stones, none to stay their march.

“I will give them their due if God has given me the chance.”

An icon of youth and courage he shot out to oppose them and made them retreat.

A few reeled, a few fell flat on the ground.

Most ran helter-skelter for life.

Yet quite a band surrounded him and he fought his hardest.

Through the enemy array on the eastern front an Abhimanyu forged ahead.

But alas someone from behind armed with an iron-bar hit him right on the head.

At the healing touch of the Divine Mother he opens his eyes and smiles again.

To me Bagha Jatin is a legend.

But to-night I have watched, to my surprise, action that is bright with bravery.

[Translated by the poet from the original Bengali]

In 1967 Togo shifted to France with the Mother’s permission. In 1970 he joined Professor Jean Filliozat’s class in Philologie Indienne at the Ecole Pratique des Hautes Etudes, Paris, which was held at the Sorbonne University’s main building. A few years later he joined the International Medical Sophrology College at Paris and also studied at a Naturopathy Institute. He had also represented India, along with his eldest brother Rothindranath, at the 10th session of the International Olympic Association held in Greece in August 1970.  In France he worked as a professional therapist with specialization in Exercise, Yoga, Acupuncture, Auriculotherapie, Reflexology, Lymphatic Drainage, Magnetisme, Hypnotherapy and Bioenergy for twenty-seven years till his return to India in 1994. He settled in Pondicherry where he gave free treatment to his patients as a service to the Mother.

Togo was a born fighter. The injuries which he received during the Anti-Hindi riot in 1965 gave rise to several complications in his health but he remained unperturbed. Neither age nor his illnesses could affect his undaunted spirit and delightful sense of humour. One could never fail to notice the fire of undying courage in his eyes. He was a sincere and dedicated practitioner of the Integral Yoga who never flaunted his inner spiritual life. He also made it a point never to disclose his spiritual experiences with anyone; only once he made an exception when a few months ago (on 18 May 2012 to be precise) he informed me about a darshan of the Mother which he had during the early hours of the day; he saw the Mother giving him prasad twice with her own hands.

Throughout his entire lifetime, Togo wanted to be nothing but an ideal instrument of the Mother and to work for the mission of Sri Aurobindo. When he was diagnosed with third stage cancer in April 2012 he was least perturbed. He accepted his illness as an act of the anti-divine forces and was determined to fight against them. And he did fight like a valiant warrior till his last breath. He was admitted to Pondicherry Medical Hospital on 11 December—on his seventy-fifth birthday—when his health deteriorated quite suddenly. For the next three days he fought a hero’s battle with Death. In the morning of 14 December, after his breakfast when the doctor suggested that he should be given a rice-tube to facilitate his eating, he flatly refused and expressed that he would prefer to leave. When the dedicated group of servitors who looked after him during his last months visited him in his cabin in the afternoon they found him to be fully conscious. He looked at them, lifted his eye-brows and even moved on bed. After they went out of his cabin at 3.30 p.m. Togo left his body quietly and peacefully at 4 p.m.

I met Togo-da for the last time on 5 December 2012 at his residence in Pondicherry and spent around ninety minutes in his delightful company. He looked quite fresh on that day. Before leaving, I hugged him and said that we would meet again soon. He smiled with a twinkle in his eyes. But I guess it was destined to be our last meeting.

Hero-warriors like Togo-da don’t die. They live forever in the hearts of their admirers. 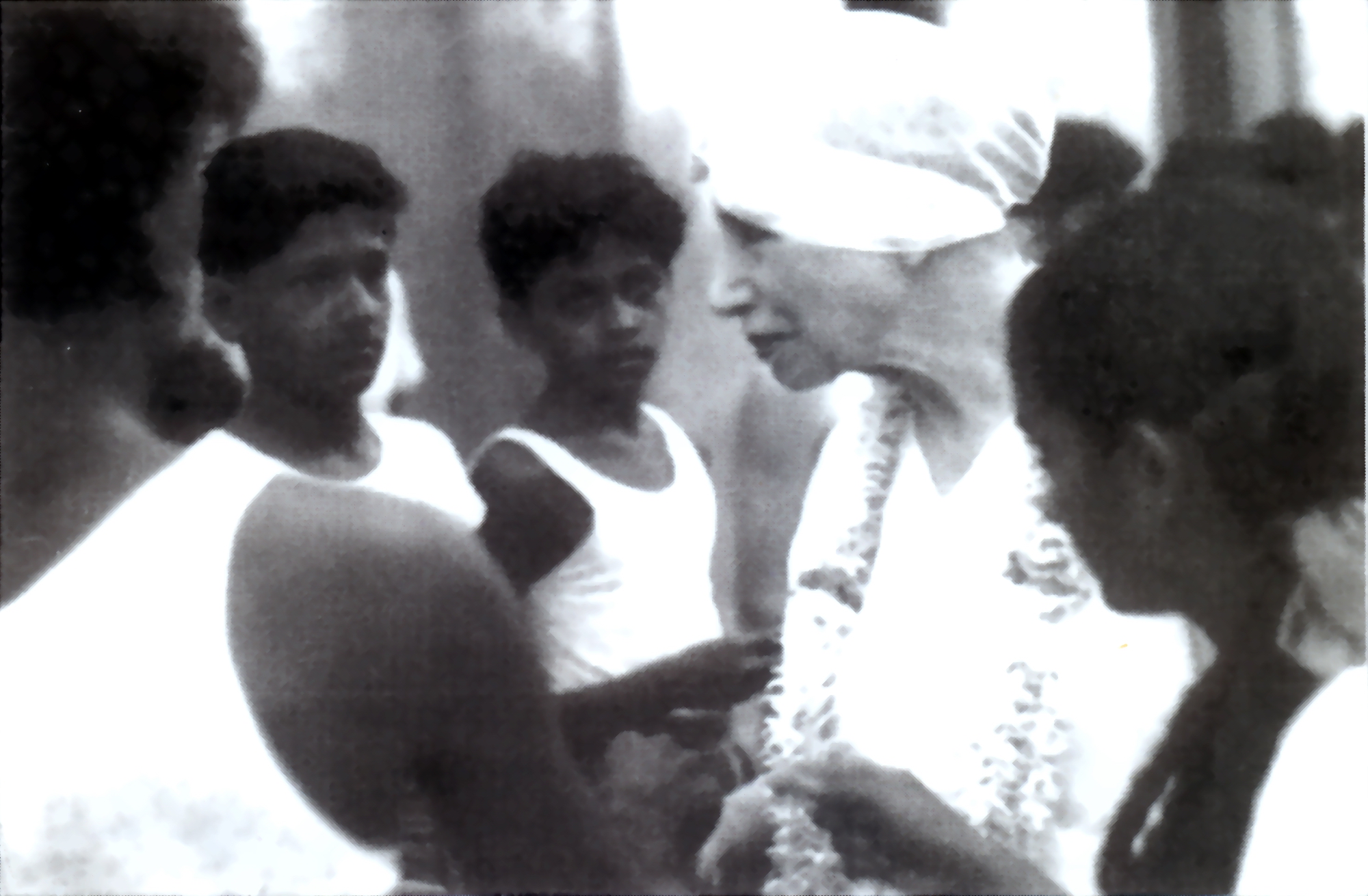 Togo with the Mother during Playground Prasad Distribution 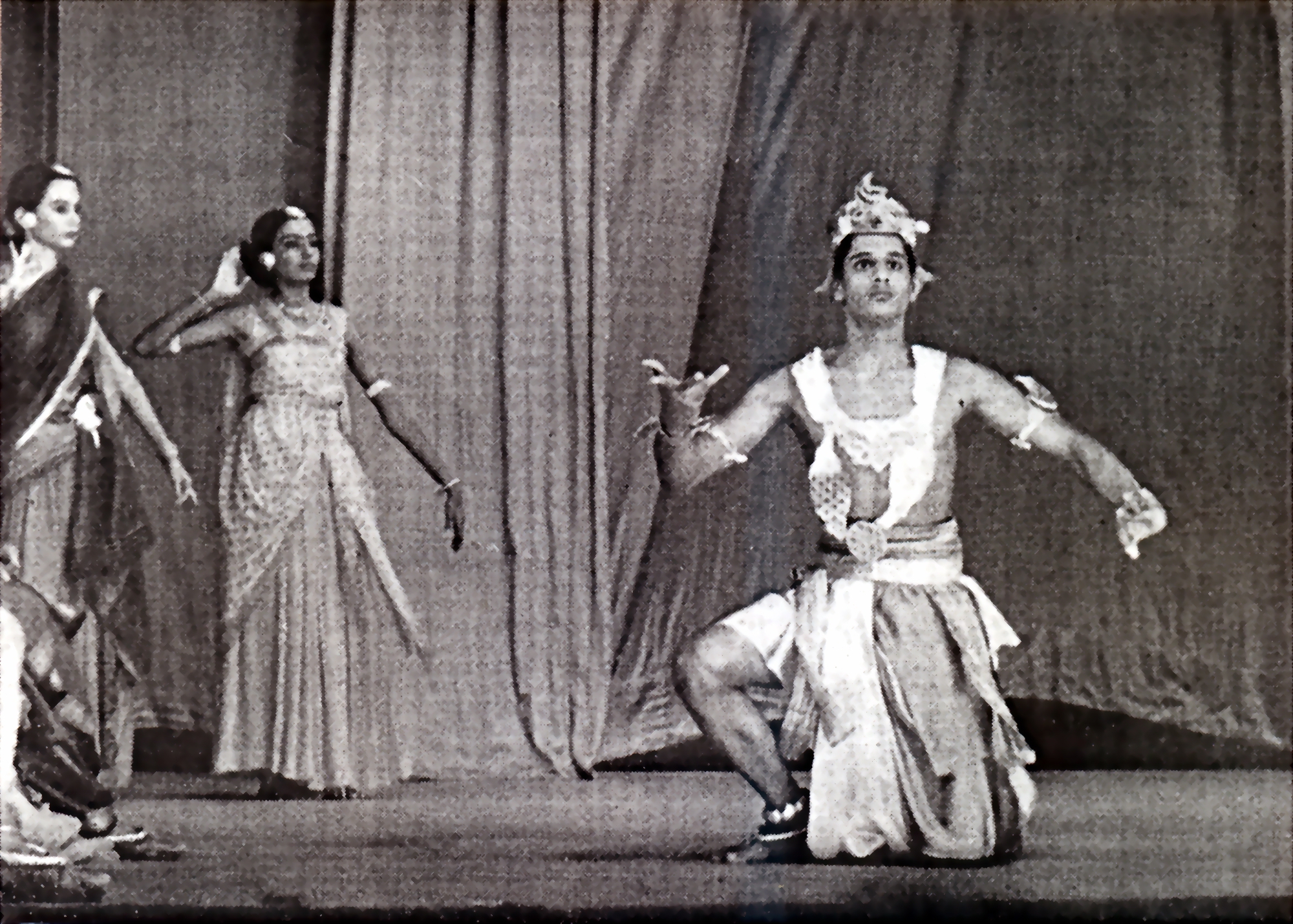 Togo as Agni, the God of Fire, in a dance drama 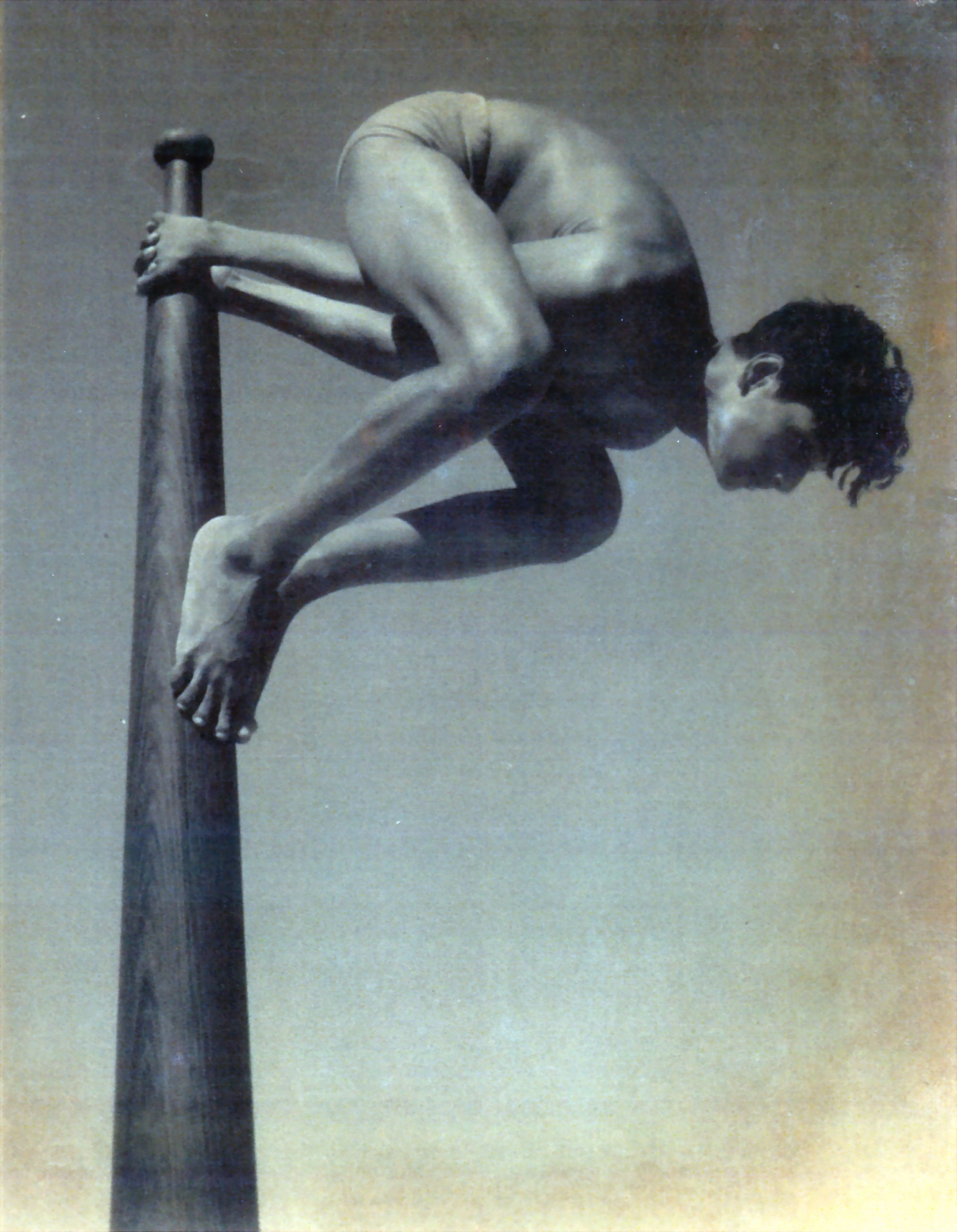 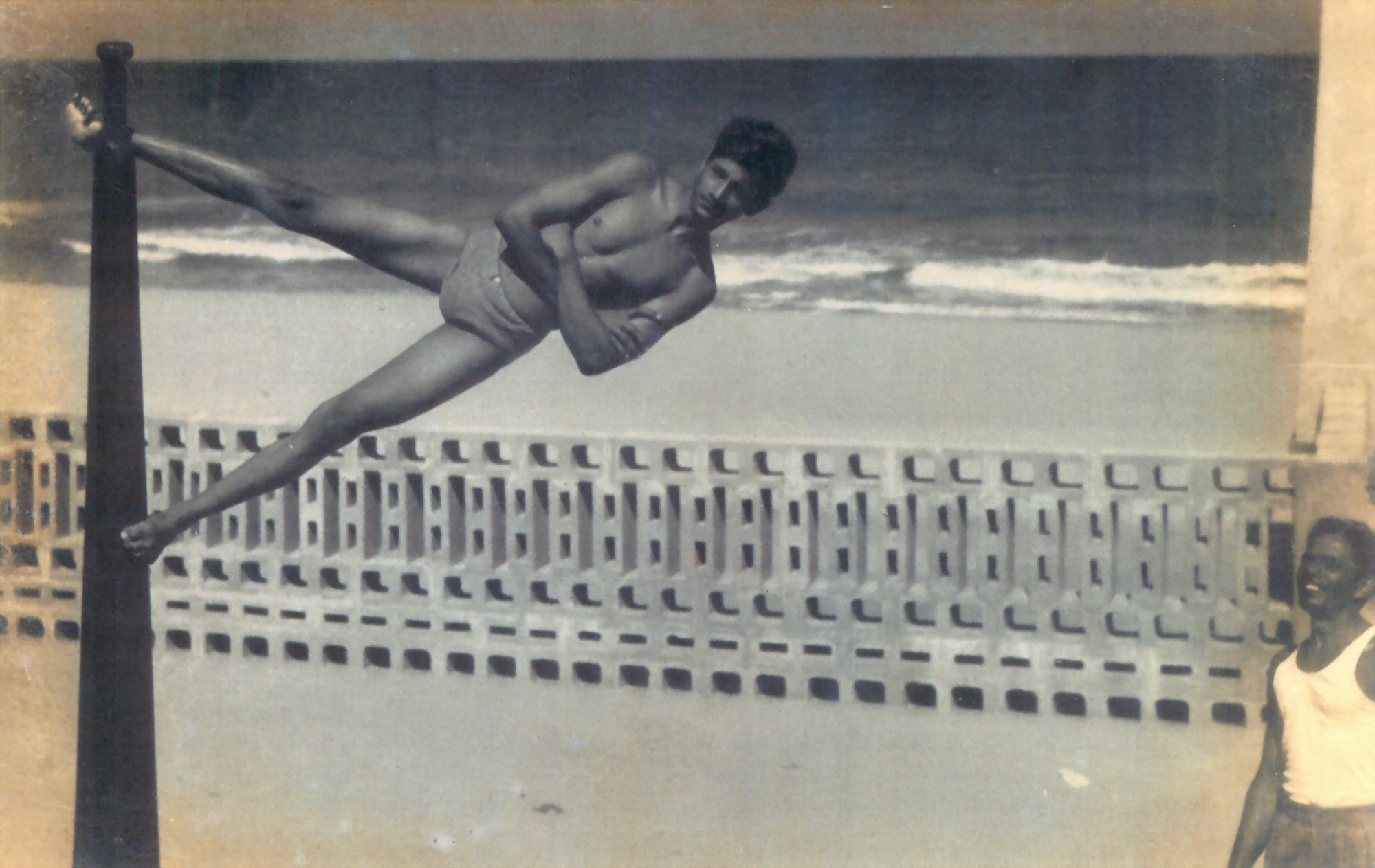 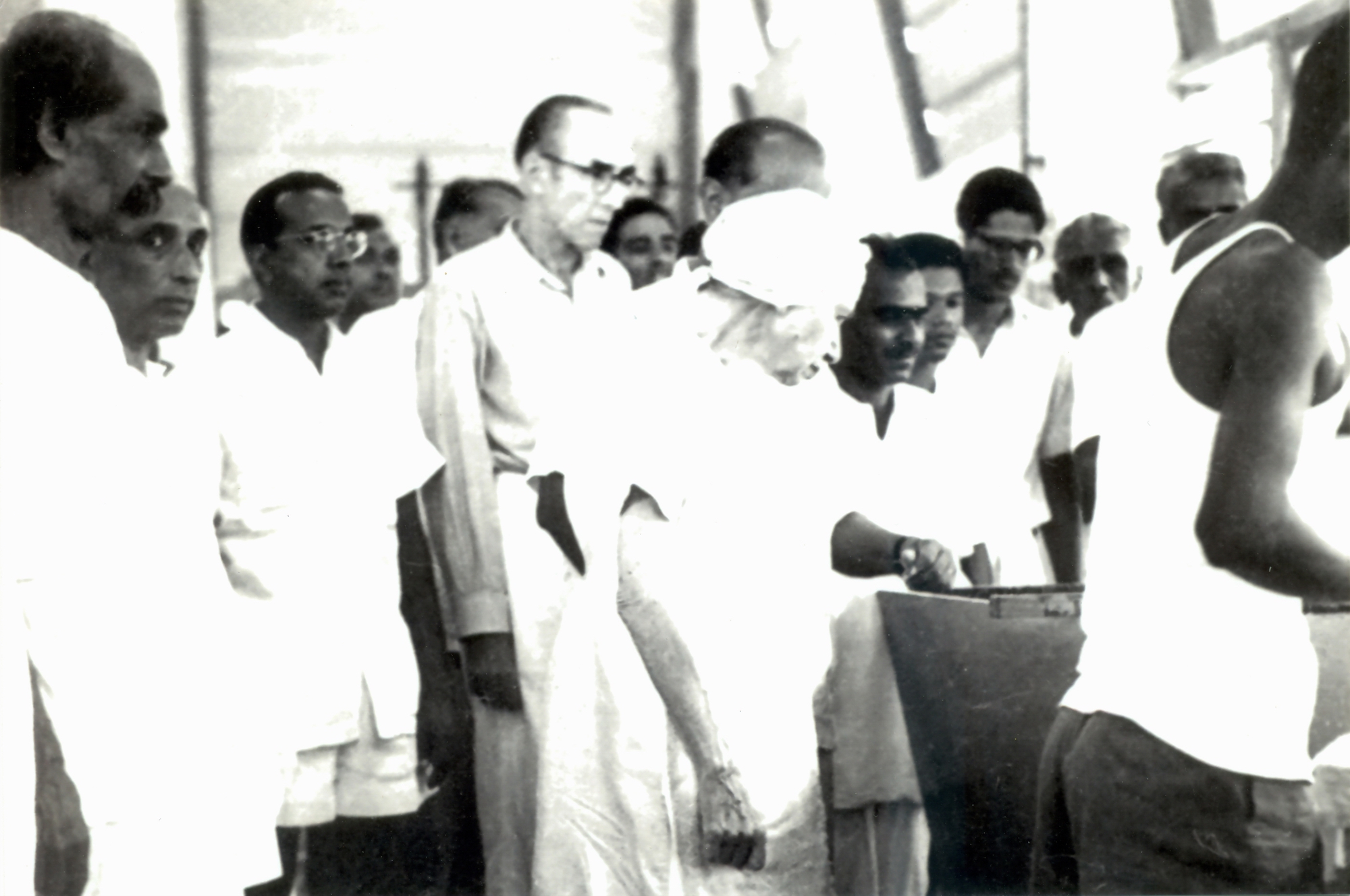 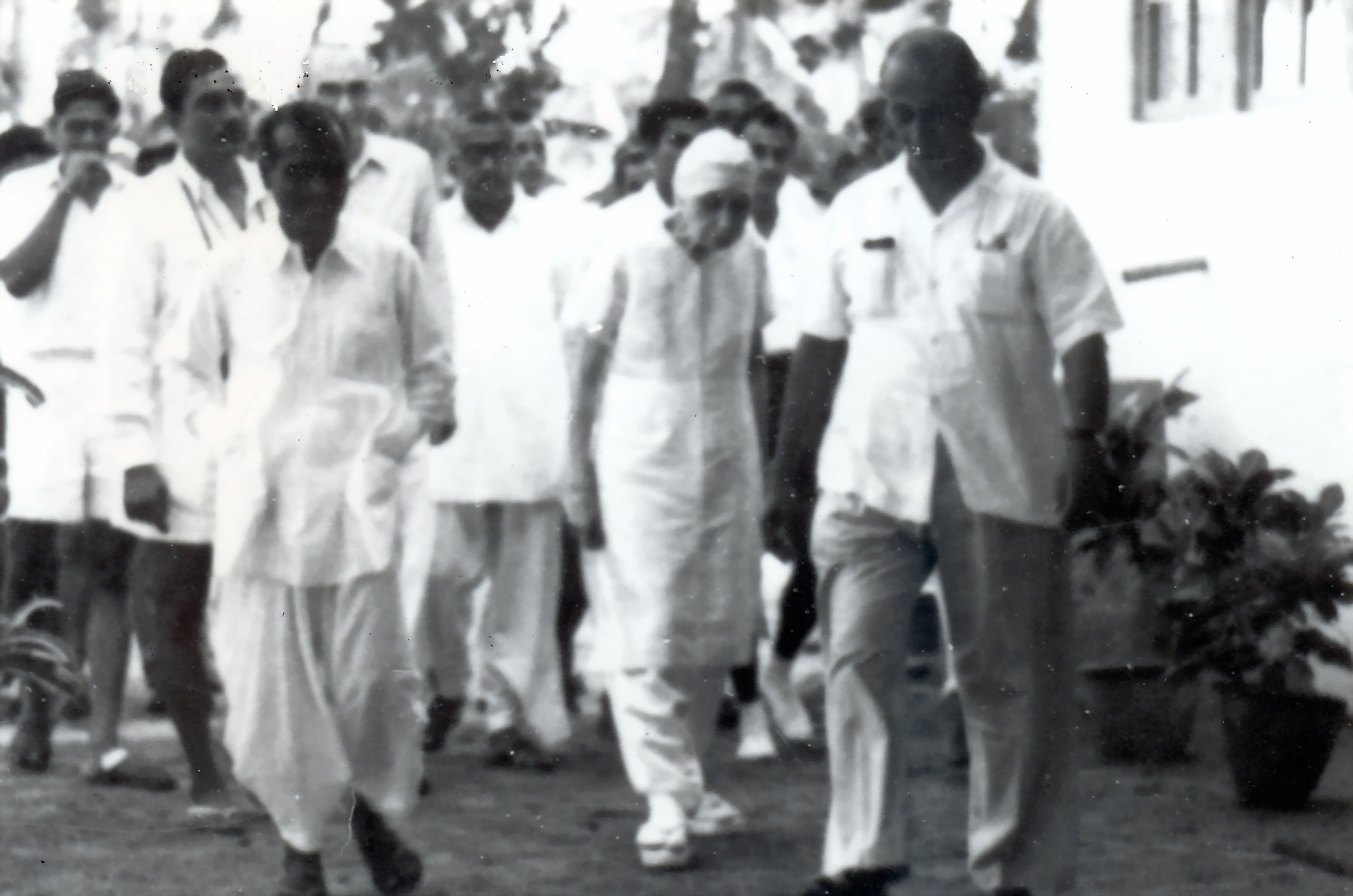 14 Replies to “The Passing of Togo Mukherjee”