Wishing you all a very Happy New Year.

The Story of the Samadhi of Sri Aurobindo and the Mother 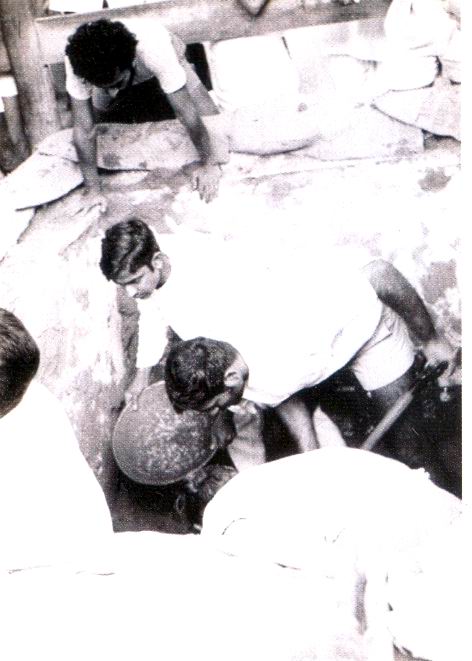 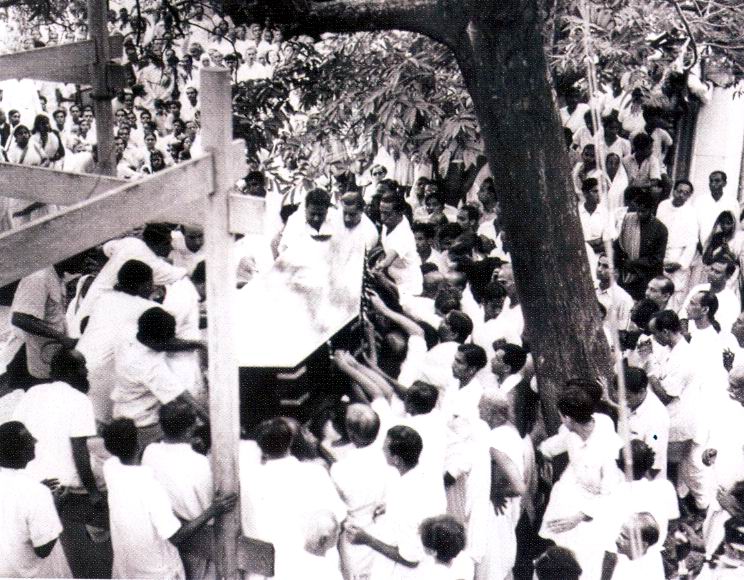 Photograph of Sri Aurobindo’s Casket being taken towards the Samadhi vault (9 December 1950).

Sri Aurobindo’s body was laid to rest on 9th December 1950 at about 4.00 p.m. and the top slab was sealed with waterproof material and flowers were offered on the top.

The next day, 10th December 1950, early in the morning a number of Ashramites came and arranged flowers on the Samadhi. At that time the flower room was inside the Ashram (now Pujalal’s room). Later, the flower room was shifted. As per the Mother’s instruction, one agarbatti (incense stick) was kept burning throughout the day and night and I was given the work of purchasing agarbatti’s from the market. About a year or so later, when our Cottage Industries started preparing agarbatti’s and offered them for the Samadhi, the purchasing from the market was stopped. Volunteers were given the work to take care of the Samadhi and to see that the place around the Samadhi was kept clean and one agarbatti was always kept burning. Everyday, fresh flowers were arranged on the Samadhi.

I was working in Enterprise (Manoranjan’s department) at that time and I was given time to work near the Samadhi for a few hours in the morning, and at noon and also at night. Ashramites and devotees would visit the Samadhi and do pranam from early morning, i.e. 4.30 a.m., when the Ashram gate opened up to 11.00 p.m., the time when the gate closed. Three persons were allowed to stay at night for duty near the Samadhi. The first person (I do not remember his name now, was on duty from 10.00 p.m. to midnight. Next, it was Dayabhai’s duty — from midnight to 2.00 a.m.; and my duty was from 2.00 a.m. to 4.00 a.m. At 4.00 a.m. some Ashramites used to come to arrange flowers on the Samadhi — even now it is continued. Our duty was to keep awake near the Samadhi and see that the agarbatti was kept burning continuously. This night duty continued only for about a month because Bula-da, who used to stay inside the Ashram premises, spoke to the Mother and took upon himself the responsibility of our work. So our night duty was discontinued. 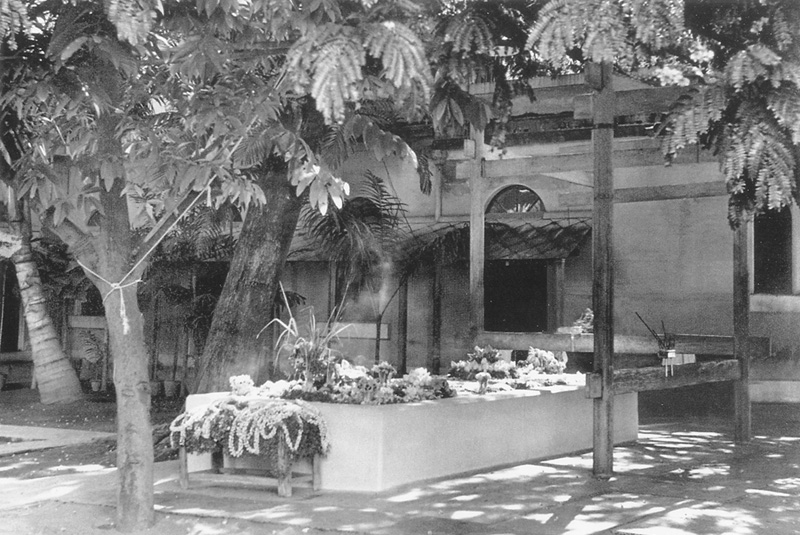 Sometime in late January 1951, we found that some who were coming to the Samadhi were bringing agarbattis; also, some coins were found placed on the Samadhi along with the flowers. This I reported to The Mother. She said, “If the people are offering coins, you better arrange to keep a small box on one corner of the Samadhi, so that they may put the money in the box rather then putting it in the flower decoration. In the meantime I shall ask Udar to prepare a small brass box in Harpagon and fix it near the Samadhi”. The Mother also told me to inform all those on duty to tell the persons who wanted to offer money, that they should put it in the box and not on the Samadhi flowers. I got a small marble box with a loose lid from Kameshwar Rao and kept it as a temporary measure on the north-east corner of the Samadhi. This is how the offering box started. About 4 or 5 days later i.e. on 27.01.1951 one brass box (6″x 3″ x 2 ½ ) was fixed near the Samadhi. The Mother gave me both the keys of the offering box and told me, “You will open the box everyday and bring the offerings to me on the next day in the morning when you come for pranam. I said “Yes Mother”.

In those days, the money was in Rupee-anna-pai denominations. I would collect the money at night and write the amount in a notebook, and offer it to The Mother the next morning. She would sign and write ‘Blessings’ in the notebook.

After few days someone brought a coconut and broke it in front of the Samadhi. Immediately I reported it to The Mother. She told me to stop that saying, “I don’t want religious activities here. You inform Reception Service.” I immediately came down and stopped the person and told him not to repeat it, then informed the Reception Service of The Mother’s words.

In the same way, after a few days, someone brought camphor and started burning it in front of the Samadhi. It was brought to The Mother’s notice. The Mother said, “I don’t want any fire here. Stop it. Only one agarbatti should burn day and night.” I told the person and stopped it and informed the Reception Service. Since then both these things are stopped for good. 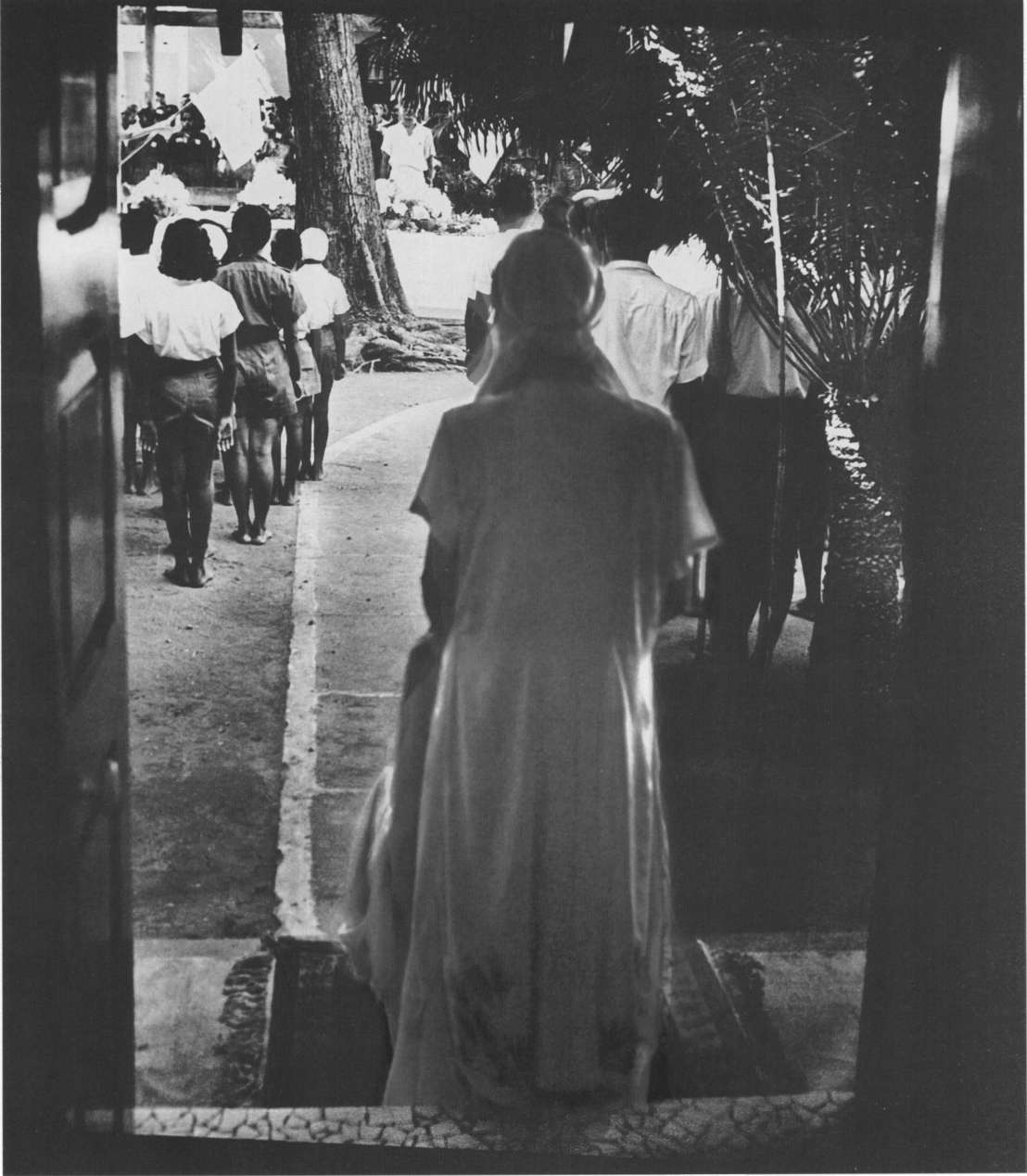 The Mother looking at the Samadhi.

From the beginning, for some years (1950 to 1966), we used to paint the Samadhi with ‘Snowcem’, specially just before Darshan days and whenever it was required. The suggestion to fix marble stones was approved by The Mother in the year 1967 and it was done. 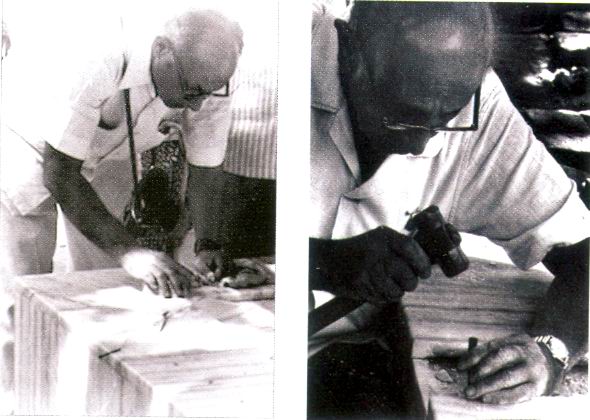 Viswanath Lahiri and Udar Pinto laying the marble on the Samadhi.

In 1966, a bigger offering box was needed, which The Mother sanctioned and it was made in Harpagon and fitted on 1.8.1966.1 was wondering what to do with the old small one. This was referred to The Mother and on 2.8.1966. She sent word through Amrita-da, Saying, “Ask him (Gangaram) to keep it as a souvenir”.

In 1970, there was a proposal by three Sadhaks (K, M & P) that the offering box be made in silver, for which they would bear the expenses. The Mother approved of the idea on 24.2.1970. A silver box was prepared in Madras by A P and brought to Pondicherry. When I took it to The Mother, She was happy to see it and She exclaimed, “Oh! so big!” I said, “Yes Mother”. She opened the box, looked inside and then closed it, giving both the keys to me along with Her Blessings. This was installed at the Samadhi and it continues to be there.

When The Mother left Her body on 17.11.1973, as per the instructions given by Her to Pranab-da, Her body was laid to rest in the second (top) chamber of the Samadhi and sealed with waterproof material. The flower decorations on the Samadhi continued. 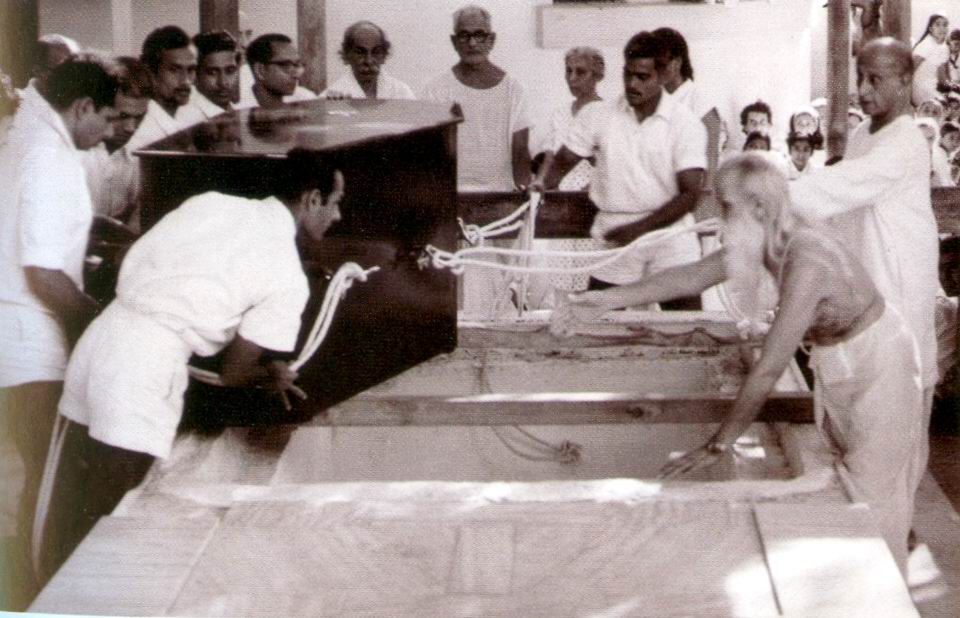 Placing the Mother’s Casket inside the Samadhi vault on 20 November 1973. 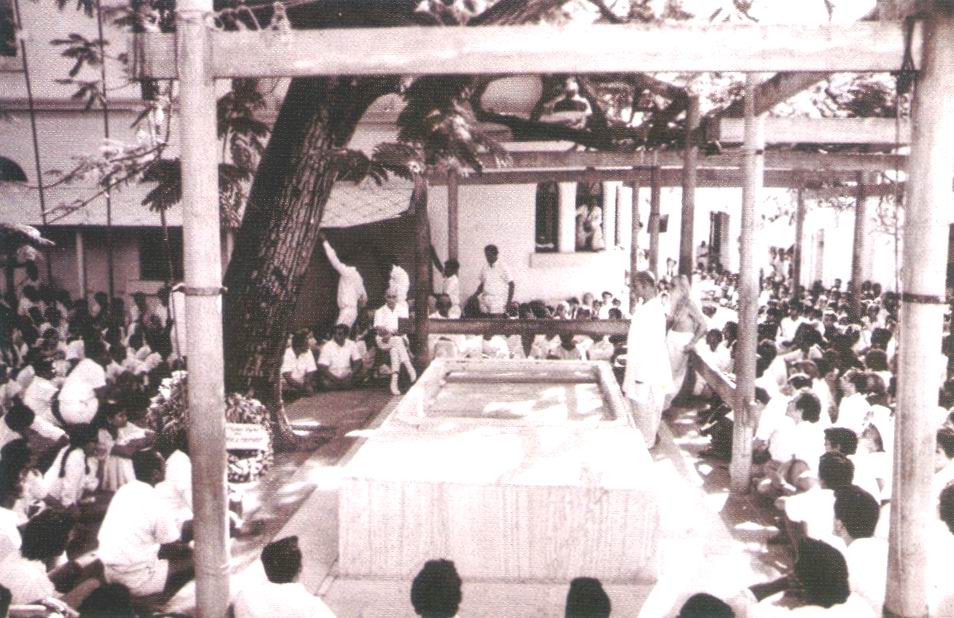 The Samadhi after the Mother’s Casket was put inside the vault (20 November 1973).

After some years, again it became necessary to have a still bigger offering box. The silver box touched and blessed by The Mother was kept as it was, and it continues to be there even now. A new one, this time in stainless steel, was prepared and placed at the corner of the pillar in line with the previous one.

The flower decorations on the Samadhi used to be done early in the morning, from 4.00 a.m. to 5.30 a.m. and this still continues. However, it was found that flowers did not remain fresh till the evening. Hence, in 1984, it was suggested by Nirod-da that the flowers be changed at mid-day, using fresh flowers for the Samadhi decorations and this is what is being done even today.