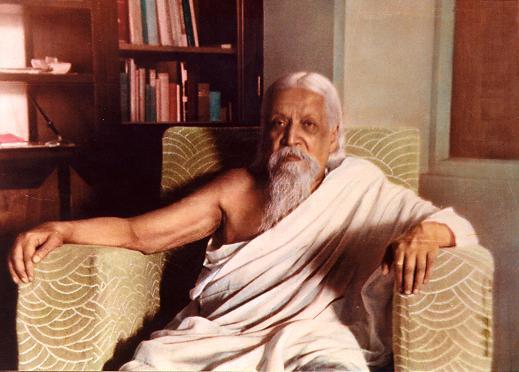 Clothes used personally by Sri Aurobindo or in his service were taken care of by different people who washed, ironed, and when needed, mended them. Sri Aurobindo’s clothes were washed by Champaklal, Moti-ben, Anjali, Bibha and later by Nalina for a few days. These clothes were ironed by Nalina and Anjali. There were many ladies who were given the work of mending the clothes when needed.

When we look at the photographs of Sri Aurobindo, we notice that in his early days till his stay in Baroda, he used to wear Western clothes. When in Bengal we find him in dhoti, punjabi, and chaddar or shawl. In a few pictures taken in Pondicherry before 1950, he is either wearing a dhoti, one side of which is wrapped over his upper body, or he is wearing a dhoti with a chaddar.

The earliest record of washing Sri Aurobindo’s clothes is in Champaklal Speaks, p. 48. Champaklal records there:

‘One day I said to Mother: “Mother, I would like to wash my father’s dhoti.” She smiled and said that she would ask Sri Aurobindo. The next day when I went to Sri Aurobindo he looked at me and said: “You want to wash my dhoti?”

Sri Aurobindo: “Are you ready?”

I looked at him in surprise and wondered why he asked that.

Sri Aurobindo: “You know, people will mock at you, laugh at you, joke about you. Are you ready for all that?” When he saw that I was eager to do this work in spite of such possibilities, he looked at me affectionately and smiled. He said so because the Ashram atmosphere was like that at that time. But very soon Mother changed it entirely.’

This incident took place during the early days of his stay in the Ashram.

Moti-ben takes over the washing

Later, this work was given to Moti-ben, Champaklal’s aunt. She arrived in Pondicherry in 1926. She recounts in her reminiscences (Mother India, February 1995) the following:

‘I had the privilege of washing Sri Aurobindo’s clothes twice a day and this way I got his darshan also twice a day. I went to Sri Aurobindo’s and the Mother’s bathrooms in the morning to collect the clothes for washing and in the evening took back the cleaned clothes… I went to Sri Aurobindo’s room in the evening to keep his dhoti there. Initially I used to place it outside his room. Later on, the Mother permitted me to place it inside. Those days Sri Aurobindo kept walking up and down in his room. As soon as I opened the door he would switch on the light and I would place his dhoti inside.’

At Moti-ben’s residence on the first floor of the present Ashram Post Office building, all arrangements were made for washing of clothes. She used to wash and iron Sri Aurobindo’s dhoti. After drying the dhoti, Moti-ben would finely crease it. This was done by a specially made wooden structure. In Bengal, Babus of that time, always had their dhotis similarly creased.

‘…After his accident, I had to wash heaps of clothes every day.’

Once, she had used up all of the monthly stock of her soap. She asked Mother for more. Sri Aurobindo wrote to her in Gujarati that clothes get spoilt very soon if too much soap is used!

When the Second World War started, supplies of many items which came from foreign countries stopped. One of the items was washing soap for Ashramites. Pavitra-da guided Jatindra-da, who was looking after the Bakery, to make bars of washing soap needed for Ashram work. The Mother and the other Ashramites were very satisfied with the results of this soap.

From then on items like bed-sheets, bed-covers, curtains etc. received from the Mother’s or Sri Aurobindo’s rooms were washed in the building, which became the new Laundry of the Ashram—“Blanchisserie”. Mulshankar brought these to the Laundry and also took the washed ones back to the Ashram. These were personally washed and ironed by Jatindra-da. Jatindra-da used to sweat profusely, so when ironing these pieces he used a small table-fan offered for this purpose by a devotee. While attending to these items he never spoke, he even tied a cloth around his mouth to avoid any spit falling on these special articles.

Sri Aurobindo’s clothes were washed in “Dutta House” (14, Rue de la Marine), in the evening at 6 p.m. by Anjali and Bibha. The Mother’s clothes were washed in the morning hours. Clothes washed on the ground floor were dried on the first floor. There was a big, long hall, open on all sides, with doors and windows. In this hall there was a long table used for drying the linen.

Linens used by Sri Aurobindo, except his dhoti, were washed by Anjali and Bibha. Liquid soap was used for washing and there was a good supply of water too. We shall mention here how many of the clothes had to be washed in a special way as most of them were being used for a long time.

There were two very good quality silk chaddars with maroon borders. These were rather worn out, but Sri Aurobindo preferred to use them. Many of his bed-sheets and pillow covers were darned. Nirmala did his job. These were darned so skillfully that they looked like beautiful embroidered ones.

Cleaning of such items was difficult. When washing such old pieces, the item would first be spread out on a towel. Together with the towel it would first be dipped in water and an adequate amount of liquid soap was added. Both the towel and the piece would be taken out and dipped repeatedly in clean water till there was no trace of soap left. The whole process was done in such a way that the strain of the washing was borne by the towel. Thus the actual piece would be saved from further wear and tear.

Cleaned items after washing were taken to the first floor for drying. Clothes were never squeezed for drying. Both the towel and the item were placed spread out on the long table. Another towel would be placed on top of the previous one and then by gentle pressure of the palm over the whole area, water would be absorbed till the item was dry.

These were taken to Nalina’s house where they would be ironed. A neat bundle was made of these clothes and it would be handed over to Champaklal.

We recount a beautiful incident. One napkin, which was used for wiping a table in Sri Aurobindo’s room, was so worn out that it was difficult, even with all the precautions taken, to wash it any more. The ladies who were washing the clothes were afraid that the threads may give way any day, and thus the piece may get torn. Anjali reported to Champaklal the condition of the napkin. Next time they received a new one. It seems that Sri Aurobindo remarked to this effect: “Champaklal, how could you reject so easily something which has served you faithfully for so many years?”

About the Author: Born in 1928, Chitra Sen is the daughter of Nolini Kanta Sen and Ila Sen and younger sister of Dr. Satyabrata Sen who was Sri Aurobindo’s physician. After visiting the Sri Aurobindo Ashram at Pondicherry a couple of times, she joined it as a permanent inmate in 1943. In 1945 the Mother sent her to work in the Ashram Press where she, along with a few others of her age-group, learnt hand-composing and mono-typing. She continued to work in the Ashram Press till 1966. At the same time she taught Biology in the Sri Aurobindo International Centre of Education and afterwards was made the in-charge of the Biology Department. In 1946 the Mother sent her to help to look after the Physical Education for senior women and in 1948 made her the ‘captain’ in-charge of the three ladies’ groups along with members selected by the Mother to help in various physical education activities. In 1988 she was given the charge of Tresor Nursing Home. She was also chosen as one of the members of the Advisory Board to help in the Ashram’s work. She was also given the charge of the Batik Department.