29 June 2019 marked the eighth death anniversary of K. D. Sethna. As our homage to him, an article titled Years with my mentor: K. D. Sethna penned by Dr. Goutam Ghosal has been published in the website of Overman Foundation.

From the early 1980s till when Sethna was shifted to the Ashram Hospital from 21 Rue François Martin, I was in close touch with him, and even beyond that in his initial months in the hospital, although the Clear Ray was incapable of teaching me anything then. Asha-di, then attending on him in the hospital, told me about his frequent shouts at night: “Where is Goutam Ghosal now?” I could hardly believe I was in his mind!

My visits to Pondicherry became frequent from the 80s, four times a year, with a magnetic pull from 21 Rue François Matin. The 4 PM tea at Nirod-da’s room was certainly another fascination. Nirod-da’s first question would be, “Have you met Amal?” With Sethna it was business, learning as much as possible from him the finer issues of Overhead Aesthetics which Sri Aurobindo had passed on to him. He would usually give me time at 9 in the morning. There was “God’s plenty”—from Shakespeare to Blake, from Nissim Ezekiel to P. Lal, from the current issues on Sri Aurobindo, from his own poetry, from Gokak [1] to Iyengar [2], from Harin [3] to Nirodbaran.

Sometimes I would raise the memories of the Sethna-Lal battle of letters of the early 1950s. “Ezekiel is a better poet, Lal is a better person”, he would say quietly looking up the windows to the sky outside through his thick pair of glasses. He would often funnily refer to a customer who had once asked in a Bombay book store, “Do you have the book by Sethna, Shakespeare on Sri Aurobindo?”Meena-di was extremely generous to me even when I was making him tired. That was good luck for me. I was young then and fond of dresses. I watched his bright white shirts stealthily and his bright white socks half-covered by the exotic black belted sandal-shoes.

He would correct my write ups, dictated things for my research and strictly criticised my exuberant essays on the “Satellite poets”. In a letter dated, 21.12. 1986, he criticised my observation on Harin and strongly objected to my calling Harin a “fallen angel”. It will prick “the sensitive skin of the poet”, he cautioned me. Sometimes he would turn personal: “Why do you travel by bus?” he said, “Take the night train to Madras and sleep well.”

Sethna told me he had ceased to write poems after Sri Aurobindo’s passing. “Why?” I asked. “The inspiration had passed away with his passing,” he said. He did write one before collecting The Secret Splendour. That was probably on the “fading rose”, a poem advancing the Yeatsian idea of Rose. He was all praise for  my Notes on the Mother’s Prayers and Meditations. I miss him; I miss his friend Nirodbaran who would always press me to go to the hospital to see him. Amaler songe dacha korecho? Have you met Amal? They were the lights of my other days. 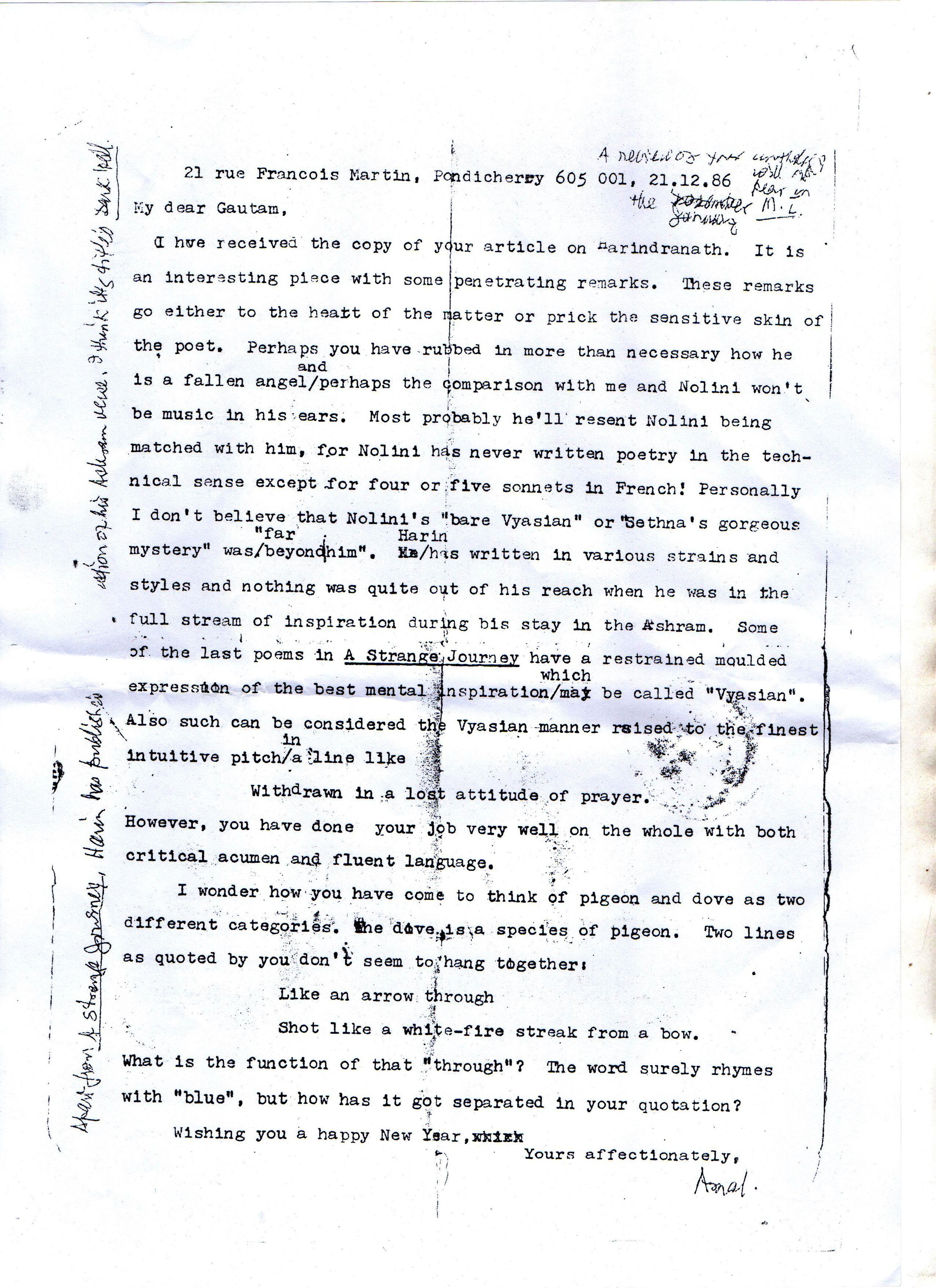 [1] Gokak : Vinayaka Krishna Gokak (9 August 1909 — 28 April 1992) was a major writer in the Kannada language and a scholar of English and Kannada literatures. He was the fifth writer to be honoured with the Jnanpith Award in 1990 for Kannada language, for his epic Bharatha Sindhu Rashmi.

[2] Iyengar : Kodaganallur Ramaswami Srinivasa Iyengar (17 April 1908 — 15 April 1999), popularly known as K. R. Srinivasa Iyengar, was an Indian writer in English, former vice-chancellor of Andhra University. He was given the prestigious Sahitya Akademi Fellowship in 1985. He then served as vice-president of Sahitya Akademi from 1969 to 1977, and then its acting president from 1977 to 1978. He has served as a member of the Press Council of India, the Board of Governors of the Indian Institute of Advanced Study, Simla from 1970 to 1979 and the CIEFL (Hyderabad) and on the executive of the P. E. N., All India Centre. He was conferred with D. Litt degrees (honoris causa) by Andhra and Sri Venkateswara Universities. His work On the Mother received the Sahitya Akademi annual award in 1980.

[3] Harin : Harindranath Chattopadhyay (2 April 1898 — 23 June 1990) was an Indian English poet, a dramatist, an actor, a musician and a member of the first Lok Sabha from Vijayawada constituency. Younger brother of Sarojini Naidu, his poems were appreciated by Rabindranath Tagore and Sri Aurobindo. The Government of India awarded him the civilian honour of the Padma Bhushan in 1973.

About the author: Poet, critic, translator, Goutam Ghosal, D. Litt, is Professor of English, Visva-Bharati, Santiniketan. A leading interpreter of Sri Aurobindo’s literature, psychology, philosophy and sociological thoughts, he was the chief editor of The Visva-Bharati Quarterly from 2005 to 2007. His major books include The Rainbow Bridge: A Comparative Study of Tagore and Sri Aurobindo, Sri Aurobindo’s Prose Style, Sri Aurobindo and World Literature, Notes of Prayers and Meditations, Notes on the Renaissance, Indian Literature: Points of View and Magic Mirror and Other Poems. Dr. Ghosal has published more than two hundred papers and articles in various journals, especially on Sri Aurobindo and other Indian English poets. His other areas of interest are Shakespeare, Rabindranath Tagore, Stephen Crane and nineteenth century British and American literature.

5 Replies to “Years with my Mentor: K. D. Sethna by Goutam Ghosal”