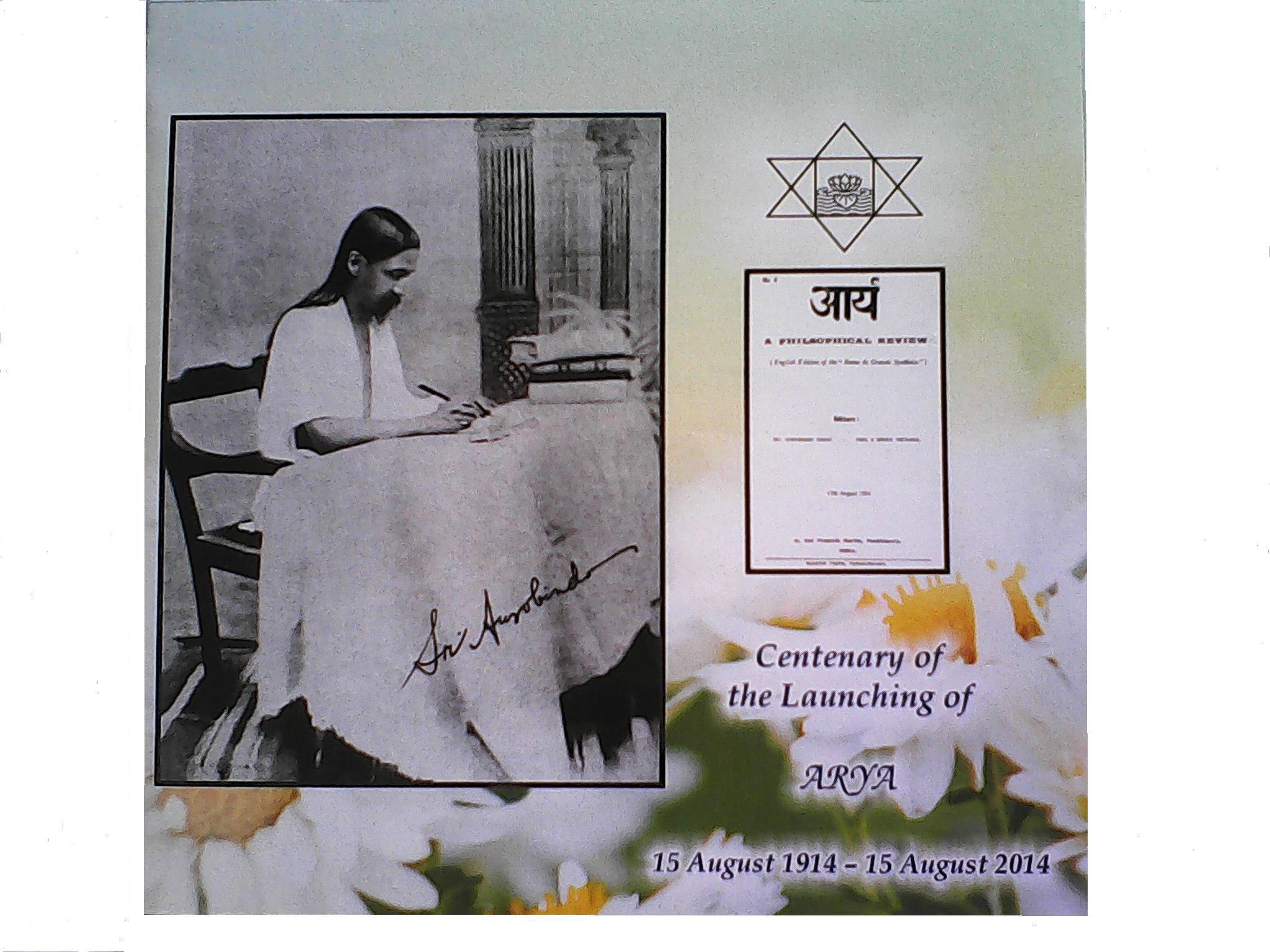 Title: Centenary of the Launching of Arya
Description: Audio CD of Shri Manoj Dasgupta’s (Managing Trustee of Sri Aurobindo Ashram Trust and Registrar of Sri Aurobindo International Centre of Education) talk in English on the said theme.
Price: Rs. 120 (One Hundred and Twenty) only.

We receive with warm gratitude the very welcome production of two audio CDs recreating the saga of two very significant events taking place in the very second decade of 20th century. These inspired and aspirational narratives are finely tuned and exquisitely produced with the assistance of the devoted children of the Divine Mother under the expert guidance of none other than “Manoj-da”. His is the master voice at once fluid and crystal clear and the listeners are drenched with devotional fervour listening to the captivating narrative of the Divine Mother’s arrival in Pondicherry and incredible rendering in Her own words the very first meeting with Sri Aurobindo. This is all done very judiciously by reading out very relevant and the apt contextual passages and fascinating incidents, anecdotes down memory lane. In this sense, the offering becomes truly a historic document luminously recorded for the posterity. History becomes alive through these recorded notes on the Way. Manoj-da’s versatility and magical rendering stand out superbly, it is almost lyrical. He has a very special voice which is honed to tonal perfection through the years of singing and chanting Sanskrit verses from the Scriptures. It is not just an audio CD but a divine celebration of the meeting of Divine Mother with Sri Aurobindo. A CD for all time meditation recalling again and again the setting of the Event for the Supramental manifestation to unfold in the years ahead. This is a very vibrant recreation of the divine event expertly done. Let us salute the collaborators of this project.

The second CD is an astonishing chronicle of the launching of Arya, surely a decisive action from the Supreme. It was a God’s labour by Sri Aurobindo who year after year tirelessly and ceaselessly poured in words the Divine plan of the Divine life for the human kind for eternity. Knowledge flowed in Him like the descent of Ganga on the earth. Sri Aurobindo had only to arrange exquisitely in words this mighty inflow of Knowledge in the journal Arya. “He had reached the top of all that can be known”— this verse from Savitri only confirms the high amplitude of Sri Aurobindo’s vast Vision, from the highest supernal regions forming the body of Arya— the journal of divine symphony. Incredibly, Sri Aurobindo was writing on diverse subjects in different books covering the high vision of Yogic philosophy, vision of the future encompassing the broadest spectrum of all that was eminently desirable to know. Sri Aurobindo did not have good fortune of having the presence of Lord Ganesh by his side to be his scribe. There was only a good old faithful typewriter to absorb the weight of the decent of the knowledge from the greater kingdoms of Knowledge, but, it was the arrival of the Divine Mother just a few months earlier than the launching of Arya which gave the divine impetus to the auspicious beginning of the journal which offered a dynamic renascent push to the intellectual life of the world at large in the purest form envisaging the divine future for all humanity. Meeting of the Divine Mother with Sri Aurobindo was already previsioned, as it were, in the onward march of History and a predestined Event repeating itself through the ages to hew the new paths of Immortality. It was the meeting of Parmeshwari with Her Parmashwar.

Words, and that too, mortal words are insufficient to describe the profound inner significance and impact of this event, a precursor of all the wonderful things to unfold. Again, a high professional skill has gone into the making of this CD—all musical in tone and tune and doing full justice to the rendering of the matter in hand. All thoughtfully planned and executed for all of us, the grateful children of the Divine Mother and Lord Sri Aurobindo. Salutations, Salutations!!!

2 Replies to “A Divinely Memorable Offering: Reviews of Manoj Dasgupta’s talks Centenary of Mother’s Arrival at Pondicherry and Centenary of the Launching of Arya by Surendra Singh Chouhan”