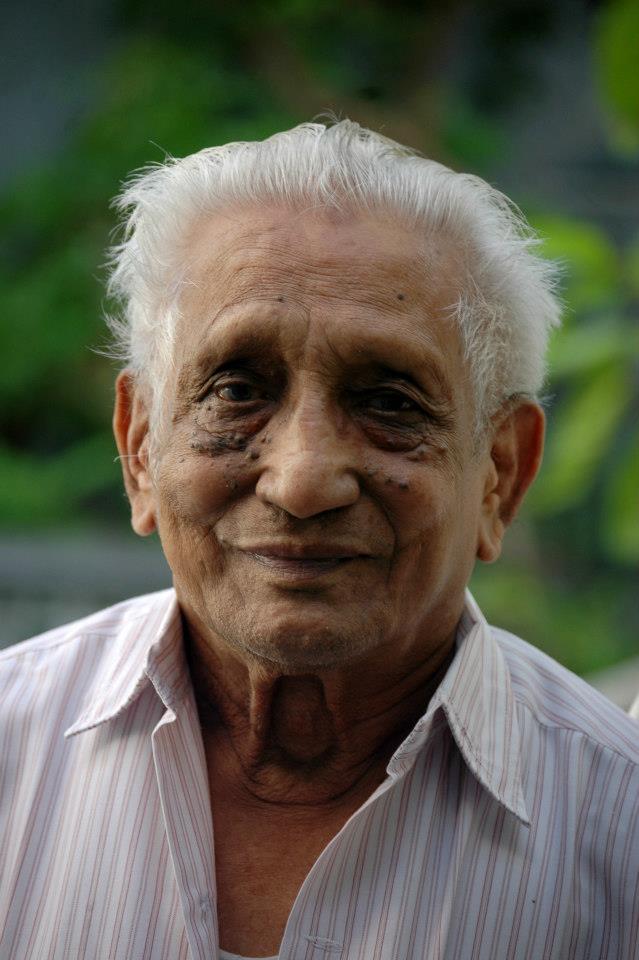 On Wednesday, 13 December 2017, the Aurobindonian community of Pondicherry lost its senior-most member with the passing away of Albert Patel at the age of ninety-four.

Albert’s father Ambalal Patel was one of the early disciples of Sri Aurobindo. He came in touch with Sri Aurobindo’s writings at an early age when he was in college at Baroda. Prior to that, he was a follower of Vishnu Bhaskar Lele under whose guidance Sri Aurobindo had attained the realization of the Absolute Brahman in just three days which ‘most Yogis get only at the end of a long Yoga’. He chose the path of Integral Yoga in 1923 and established a regular contact with the newly formed Sri Aurobindo Ashram in 1926 and eventually joined it as a permanent inmate in 1931. His wife Pushpa-ben too joined him later. Ambalal’s work in the Sri Aurobindo Ashram was to provide accommodation to visitors.

Albert was born as Avinash on 24 October 1923. He received his early education at Nadiad in Gujarat where he studied in Saraswati High School. He came to Pondicherry in February 1943 and had the darshan of Sri Aurobindo and the Mother on 21st February. The impact of the darshan was so great that he chose to join the Ashram. He left his matriculation half-way to join Sri Aurobindo Ashram in 1943 where his first job was to iron the clothes of senior inmates like Nolini Kanta Gupta, Pavitra, Chandulal and others which he continued along with tailoring till 1946 or 1947. In the initial years he assisted Kanailal Ganguly who was an inmate of Sri Aurobindo Ashram since its inception. To improve his tailoring skills, once Avinash sought the Mother’s permission to go out of Pondicherry and learn the art of tailoring. The Mother held his ears and said that there was no use of going outside and that “Knowledge is within. Bring it out.”

On one occasion, one gentleman also named Avinash asked the Mother for something which She had duly sent. Later, when Avinash Patel went to the Mother, She asked him whether he had received what She had sent. He replied that he had not asked for anything and that he won’t ask for anything. The Mother realized that this was a case of mistaken identity and said: “I must change your name.” Thus, Avinash was renamed ‘Albert’ by the Mother.

Albert Patel was in charge of the Tailoring Service Department of Sri Aurobindo Ashram for several decades. Later he became the in-charge of ‘Prosperity’, which provides the Ashramites with their basic requirements on the 1st of every month. He was also a finance member of Sri Aurobindo International Centre of Education. He became the Trustee of Sri Aurobindo Ashram Trust in the 1990s and served the Board till February 2013 when he voluntarily stepped down due to his advanced age and increasing physical incapacity.

Whenever I think of Albert-da, three words come to my mind: ‘simple, sincere and sweet.’ It was his simplicity, sincerity and sweetness that had attracted me the most when I came in contact with him. He practised the Integral Yoga through the medium of work which he believed to be the body’s only prayer. On one occasion when he was asked about his sadhana, he had replied that he was not doing any sadhana for ‘The Mother is doing sadhana.’ He would add that the Mother is always present to guide. “Only we have to remain open. It depends on you—how much you would come and aspire.”

Due to his old age, Albert had shifted to Desiree Home which takes care of the aged members of Sri Aurobindo Ashram. But every day he would visit the Ashram in a car. Some months ago he fell down and fractured his hipbone. He  chose not to undergo any operation and was shifted to the Ashram Nursing Home where he breathed his last in the early hours of 13 December 2017.

In March 2009, I had interviewed Albert Patel about his reminiscences of Sri Aurobindo. He was initially hesitant to speak and the reason he gave was: “I don’t remember much.” But after a mild persuasion he gave his consent. He didn’t evade any of the questions and answered them with full honesty. I write ‘full honesty’ because he admitted of not recalling details of some of the incidents. When the interview ended, I told him: “See, how nicely you’ve given the interview! And you were getting nervous unnecessarily!” His laughter still rings in my ears.

As our tribute to the ever-cheerful Albert Patel and his sincere devotion to the Mother and Her work, the text of his interview—which has not seen the light of day since it was conducted—is being published in the website of Overman Foundation.

Anurag: Tell us, Albert-da, how and when did you come to the Ashram?

Albert Patel: I came to the Ashram in the year 1943. My parents had settled here before. Our connections with the Ashram dated since 1926 from Baroda.

Anurag: How was the Ashram in those days? Please tell us about your recollections.

Albert Patel: At that time, the number of people in the Ashram was very less. There were around 150 people. Everything used to be very quiet and there were no movements at all in the Ashram life. We could see the Mother around five or six times a day.

Anurag: Do you recall any memorable incidents of that period?

Albert Patel: No, I don’t recall. Many years have gone by that’s why.

Anurag: When did you see Sri Aurobindo for the first time? Tell us about your experience.

Albert Patel: I saw Sri Aurobindo in February 1943 on the 21st. I was twenty years of age then. About the experience, there was nothing special. I just remained absorbed and that’s the main thing. I became absolutely quiet. But apart from it, I don’t recall anything else.

Anurag: Can you describe the Darshan days?

Albert Patel:  A line was formed by the devotees. Everyone’s names were registered. And the sadhaks used to go for the Darshan according to the way their names came in the list.

Anurag: You had the Darshan of Sri Aurobindo twenty-eight times from 1943 to 1950. What did you feel when you stood in front of Him?

Anurag: What was the most striking feature in Sri Aurobindo’s personality that you remember vividly?

Anurag: Do you remember the last Darshan on 24 November 1950?

Albert Patel: Yes. Just hurriedly we had to pass through.

Anurag: Were you told that Sri Aurobindo was unwell?

Albert Patel: No. The Mother had said, “Just you pass through Him.”

Anurag: Do you recall 5 December 1950? How and when did you receive the news of His passing away?

Albert Patel: I received the news at 1:30 in the morning.

Anurag: You got the news right after His mahasamadhi?

Albert Patel: Yes. Harikant-bhai gave me the news. Then I went to the Ashram. A queue was formed there. One-by-one everybody was taken for the Darshan.

Anurag: What did you see and feel when you went to Sri Aurobindo’s room?

Albert Patel: He was just lying down. That’s it. I didn’t see anything else.

Anurag: Did you see the light that was radiating from Sri Aurobindo’s body?

Albert Patel: That was continuously awakening everyone.

Anurag: What were your activities during the four days following 5 December?

Albert Patel: My job was to organize the volunteers. We had to escort the people to and away from the room after the Darshan.

Anurag: Do you recall Sri Aurobindo’s last journey from His room to the Samadhi vault?

Albert Patel: Yes but not exactly. I remember it vaguely. The casket was taken upstairs. Then Sri Aurobindo was put inside the casket after which it was closed. Then it was brought downstairs and lowered into the Samadhi. And at that time the Mother instructed to keep a layer empty above the Samadhi.

Anurag: Where was She at that time?

Albert Patel: I don’t remember exactly but She was there in the window opposite to the Samadhi.

Anurag: Sri Aurobindo’s passing was called ‘The Great Sacrifice’ because it is said that the ‘power of death’ died with His death. Can you explain how did Sri Aurobindo conquer death by dying?

Albert Patel: Actually speaking, from what it appears the Supramental Force was to descend. And that some instrument was needed and that’s why He became the instrument of bringing down the Supramental. That is, physically it has come on His body.

Anurag: But how did He conquer the power of death?

Albert Patel: That I can’t say. I can’t understand it.

Albert Patel: I don’t know. At that time, Nolini-da, Pavitra-da and others were present. Such things were discussed with them only.

Anurag: You never asked the Mother about it?

Albert Patel: No, nothing was discussed with the Mother.

Anurag: Sri Aurobindo had told the Mother after His mahasamadhi that He would return in the first supramental body formed in the supramental way. Do you know when will He return?

Albert Patel: That I can’t say. That depends on the aspiration of the people.

Anurag: Did the Mother give any declaration that around such-and-such time there’s a possibility that Sri Aurobindo might return? Did She ever say anything of this sort?

Albert Patel: No, nothing of this sort. At least I don’t know.

Anurag: The Mother is present amid us in a supramental body. Will She also return with Sri Aurobindo?

Albert Patel: In a subtle form; not in a physical form.

Anurag: And how would that be?

Albert Patel: That I can’t say, I can’t expect.

Anurag: Did you hear any stories about Sri Aurobindo from the Mother?

Albert Patel: At least I didn’t have much conversation with the Mother on this.

Anurag: Your father was a direct disciple of Sri Aurobindo and it was assumed by many that He would divinize His body by completing the yoga of transformation and become immortal. His passing was a setback to them. How did Ambalal-ji accept Sri Aurobindo’s passing?

Albert Patel: That I can’t say.

Anurag: You never had any talk with your father on this?

Albert Patel: No, not at all.

Anurag: How did your sadhana take shape following the mahasamadhi of Sri Aurobindo and the Mother?

Albert Patel: For me, surrender only; that’s all, nothing else.

Anurag: Do you meet the Mother and Sri Aurobindo in the subtle physical?

Albert Patel: I can’t say all these things. (laughter)

Anurag: But have you seen Them in dreams and visions?

Albert Patel: That I have so many times but can’t express. Actually speaking, Mother has said these are all personal experience and not to say to anybody.

Anurag: What, according to you, is the message Sri Aurobindo has brought for humanity?

Albert Patel: To transform the humanity. 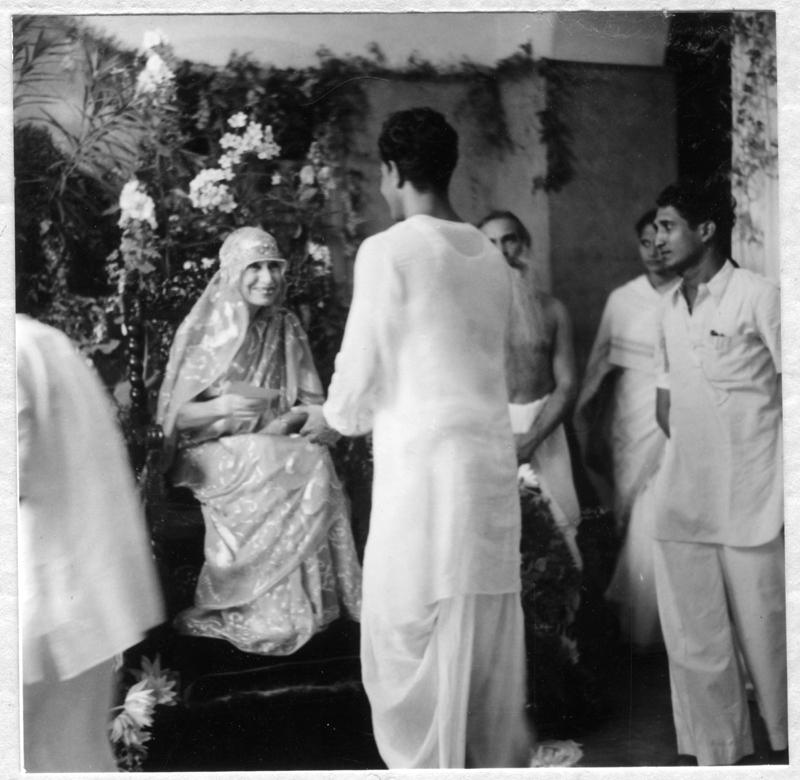 The Mother with Champaklal, Debu Bhattacharya and Albert Patel.

19 Replies to “Albert Patel: In Memoriam by Anurag Banerjee”