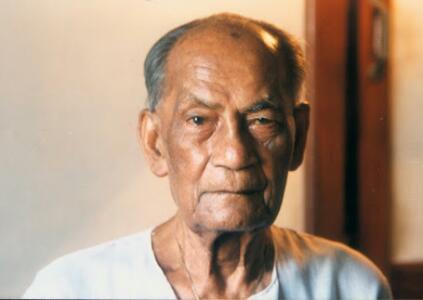 4 April 2020 marks the 110th anniversary of Sri Aurobindo’s arrival in Pondicherry which went on to become the ‘cave’ of His ‘tapasya’. On this special occasion, we are sharing with our readers an unpublished letter of Nirodbaran to The Illustrated Weekly of India.

Having obtained his M.B.CH.B. Degree (equivalent to M.B.B.S.) from Edinburgh, Nirodbaran Talukdar (17.11.1903—17.7.2006) visited Sri Aurobindo Ashram in the first week of January 1930. He visited the Ashram once again in February of the same year and stayed for a month. After working in Rangoon for two years, he shifted to Kolkata to take up private practice which he gave up within six months. He arrived at the Ashram on 15 February 1933 and was accepted as a permanent inmate. Initially he was given work in the Building Service Department. After Sri Aurobindo met with an accident in November 1938, he was selected by the Mother as one of His attendants. Eventually he became Sri Aurobindo’s scribe to whom Sri Aurobindo dictated His poetic masterpiece, Savitri. After Sri Aurobindo’s mahasamadhi, the Mother gave him charge of the work at the Samadhi. In the 1950s he began to teach English, French and Bengali to the students of the higher classes in Sri Aurobindo International Centre of Education. He has also authored a number of notable books like Correspondence with Sri Aurobindo, Talks with Sri Aurobindo, Twelve Years with Sri Aurobindo, Memorable Contacts with the Mother, Sri Aurobindo For All Ages to name a few.

This letter has remained unpublished by The Illustrated Weekly of India to which it was addressed. So we are bringing it into light in the website of Overman Foundation.

I would like to draw your attention to the article by Sri Arun Shourie, “Why don’t the good get along?” in the November 24-30, 1985 issue of your esteemed paper.

It is a matter of great regret that in that article he lumps together social, religious and spiritual institutions having different aims and methods and makes the sweeping remark that they are tainted with the same brush, the conclusion being: ‘the good don’t get along.’ I know very little of the Arya Samaj, Sarvodaya and other similar institutions he mentions and I hold no brief for them, but I am surprised to see the Sri Aurobindo Ashram included in the same category. The writer knows, I hope, that here is a spiritual institution like the Sri Ramakrishna Math or the Sri Raman Ashram and stands apart from the rest in every way. I fear that the writer’s remark is not based upon a good knowledge of Sri Aurobindo’s works and therefore he does not know well what this Ashram stands for and what it is doing.

First of all, we have not set out to do any ‘good work’ as commonly understood. Our main purpose is to realise the Divine in life and Sri Aurobindo and the Mother who have themselves realised the Divine are our Gurus. It is an accepted doctrine in Indian spiritual thought and practice that spiritual masters can guide their disciples to the realisation. Call it a cult, if you like, but in the long arduous spiritual quest, many inner and outer difficulties of the lower nature such as desire, ambition, sex, ego, etc. about which the writer laments, do crop up in order to be conquered before there comes a sea-change of the being and personality. Ego and selfishness, by the way, are not the same thing. Much ‘selfless’ work is also egoistic. Sri Aurobindo in his innumerable letters in answer to questions regarding the inner struggles of the disciples has enjoined upon us to be vigilant, to evoke what the writer terms ‘Buddha’s mindfulness’. More than anything else, he has stressed the part played by the ego. A sadhak has to conquer it—by incessant effort and aspiration and by the help of the Divine Grace from above.

I speak particularly of the part the ego plays, leading to failure in all great endeavours, because that seems to be also the writer’s central theme. The means the writer has suggested in order to get rid of it and other failings are moral and mental and do not touch the root of the matter. They lead to no radical change. Sri Aurobindo says that the true way is spiritual. And that is what is being quietly but effectively practised on the whole in his Ashram behind all the noise and clamour of the world-traffic. There lies the foundation of any lasting good work.

Summarising the defective features of all the above-mentioned organisations, the writer notes ‘three facts that stand out about each of them’. (1) Creativity has a very short life; (2) relationships within the organisation or group turn out to be far from harmonious, indeed in but a few years the group or movement splits and goes on splitting; (3) the group thinks and often talks ill of other groups, in particular of groups that are engaged in work that is similar to its own mission.

The Sri Aurobindo Ashram, in the main at any rate, has not undergone these degenerative processes. Here, creative activity is in full swing as many visitors have testified. About splitting, well, it is too early to make such hasty apprehensions. On the point of cult, it is true that in spiritual matters we accept the guidance of the Mother and Sri Aurobindo though many of us have put questions to them as regards their directions. Anyone who has read the letters of Sri Aurobindo and Questions and Answers of the Mother knows that they did not impose their opinions on the disciples and openly discussed their difficulties.

That our chief aim is realisation of the Divine does not preclude our interest in the welfare of other people. The Mother and Sri Aurobindo have helped countless people from the highest rank to the lowest in their various trials, not only spiritual but mundane as well. Their help to the Allies and to India during the last World War is a part of history. When Sri Aurobindo contributed to the War Fund, he had to face bitter criticism from his countrymen. He saw the ominous rise of Hitler as early as 1935, if not earlier. I quote here a small portion of his letter covering the information. He stated: “We feel that not only is this a battle waged in just self-defence and in defence of the nations threatened with the world-domination of Germany and the Nazi system of life, but that it is a defence of civilisation and its highest attained social, cultural and spiritual values and of the whole future of humanity… Things could not be one-hundredth part as bad as they would be under Hitler.” People realised afterwards how true his unerring vision was. I shall not recount how he directly intervened by his spiritual Force, lest I should be dubbed a blind follower.

Besides, we must remember that Sri Aurobindo calls his Yoga a world-changing yoga, not a world-shunning one. The Mother has said that what Sri Aurobindo represents in world-history is not philosophy, but an action directly from the Supreme. I have cited an example above of such an action during the last World War. The vast import of that phrase cannot be dealt with in a newspaper column. The writer can obtain the necessary light by reading Sri Aurobindo’s books, if he is interested.

Lastly, at the end of the article the instance that he quotes from the Sufis evidences the fact that nothing short of faith in God and living a life of God will bring about the result the writer longs for. That is what I mean by spirituality. The Sri Aurobindo Ashram is precisely practising this spirituality and goes much further. It is too early to express the fear that this Ashram also will meet with the same fate as the other institutions the writer has singled out in his article.