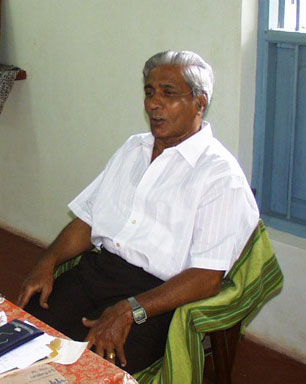 Mona Sarkar, the Chief Captain of the Department of Physical Education of Sri Aurobindo Ashram, Pondicherry, and author of several books like The Supreme, Sweet Mother—Harmonies of Light and Blessings of the Grace left his body on Friday, 11 October 2019 at the age of eighty-six.

A loving homage to Mona Sarkar authored by Surendra Singh Chouhan has been published in the website of Overman Foundation.

Mona   Sarkar  departs  to  his heavenly Abode:  A  Grateful  Remembrance

Mona-da  as fondly addressed by all those who  loved  and admired him  in the large  Ashram fraternity  here and  worldwide departed to his heavenly abode on 11th October 2019. Words cannot do any justice to his many sided personality which was entirely devoted to the service of the Divine Mother whom he adored more than just the Divine Mother. To him She was always “Sweet Mother.” His life moved around rather evolved and revolved around  “HER”  incessantly drenched in utter devotion, dedication and surrendered heart and mind. The Divine Mother , in turn, poured all Her love and blessings upon Mona-da during his long, long  nearness  to  the Divine Mother. Mona- da was also  a worthy  recipient  of  marvelous  and truly nectarous words  from Her conversations with him. These talks have come out  in series of wonderful books like  The Supreme,  Sweet Mother—Harmonies of Light, Blessings of the Grace and many more  articles and compilations of talks which he gave from time to time in the Ashram. Most beautiful and extraordinary is the talk on Savitri as received by Mona-da which he transcribed entirely recalled from memory; the final version  of this was later on  fully  approved by the Divine Mother. Sweet Mother just poured Her heart and feelings on the timeless greatness and spiritual glory of  Savitri. She revealed its supreme secret, as it were, imbued with  mantric  force. For this precious offering from him, we should remain eternally grateful to Mona- da who took down these notes to perfection and so meticulously about what  Savitri  is in its  true supramental sense.

Mona-da was essentially a sportsperson and the giant pillar of the ashram sports department. He nurtured and nourished many talented youngsters of the Ashram school to their ideal of physical perfection . He donned the mantle of  “Captain” with  high  professional proficiency. He was a hard task master. He disliked anything which was sloppy and shoddy around him. Under his watchful eyes, we all worked hard with gainful results. He loved playing football and how well he  played ! It was an exciting experience always to play along with him at the sports ground in the Ashram senior football  team. Mona-da was a familiar figure year after year to supervise the March past  and the  physical exercise  of the  most  senior group of the Ashram sadhaks in the Play Ground. His simplicity of nature and way of interacting with people was disarming. A gentleman to the core, endowed with ready wit and a fine sense of humour, Mona-da had endeared himself to one and all  by his amiable nature and easy accessibility.

Ratan Ghosh, my batch mate of SAICE’69 has shared these beautiful feelings with me about “dear Mona-da”:

“Mona-da was a ​very rare human being, a Sadhak and , on the physical plane , a great sportsman and strict disciplinarian with a humane touch, firm but gentle.

“Our association with the Sarkar family goes back to my father’s time, when he drew inspiration from Sudhir-da, Mona-da’s father and a heroic Freedom Fighter (Sudhir Sarkar was incarcerated in the cellular jail in Andamans by the British Imperialist Rulers and my father was jailed in a prison in Bengal )

“Right from my Green Group days, we all would admire — from far — Mona-da’s imposing personalities, his sculpted physique, baritone voice and unshakable poise . We all wanted TO BE LIKE MONA-DA !

“My last interaction with him was in August 2014 when I was there to attend my mother’s last rites.

“I wish peace for his departed Soul.” —Ratan Ghosh.

I always  thought Mona-da was like Srijut  Mahendranath Gupta  who  used to write down in his diary regularly and everyday whatever  Sri Ramakrishna Paramahamsa spoke  to his disciples, primarily among them was Narendranath Dutta — Swami Vivekananda. These talks were later published in the form of  The Gospel of Sri  Ramakrishna. In like manner, Mona-da also  kept faithfully  and scrupulously the  record  of all the conversations which he had  with  the Divine Mother; truly  a spiritual treasure trove. He  made “Sweet Mother”  talked and talked and, as a result, we have — fortunately — now at our disposal  astonishing utterances  of the  Divine Mother — it is for  all  of us to read this  in the books which Mona-da has brought out. Once Sweet Mother exclaimed in exasperation: “O my child, you made me  talk too much today  about Myself. Who I am etc. etc.; people will think, “As if  I am an egoist “— something  like this !

Thank you, Mona-da — we are sure, you are up there nestling in the bosom of the Divine Mother looking at us impishly. We will continue to bask in your  fragrant memories  which were  so very special. You gave us so much and so generously.

“Those who have seen me shall grieve no more” — Savitri, Book XI

Indeed, Mona-da was given this rare privilege to see the Divine Mother much more often.

About the author: Surendra Singh Chouhan is an ex-student of Sri Aurobindo International Centre of Education (SAICE); after finishing his Higher Course he taught for a year in SAICE. He is an international educator and a frequent visiting trainer and faculty in the world of academia who had taught Philosophy to the Chinese students in Shanghai under the auspices of Shanghai Normal University. Presently he is engaged in giving lectures on Savitri, The Life Divine and other works of Sri Aurobindo.

4 Replies to “Mona Sarkar departs to his heavenly Abode: A Grateful Remembrance by Surendra Singh Chouhan”