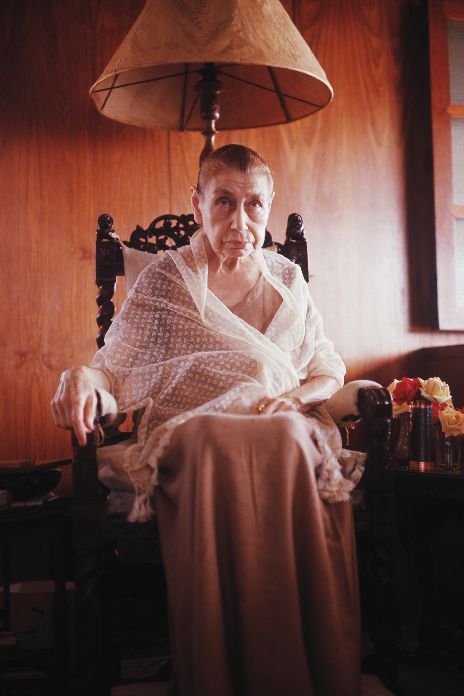 Pradyot Kumar Bhattacharya (31 August 1905—22 November 1984) was an engineer by profession who was associated with companies like Tata Iron and Steel Company and Damodar Valley Corporation. He visited Sri Aurobindo Ashram for the first time in 1933 and joined it as an inmate in March 1955. He was quite instrumental in raising funds for the Ashram. In 1972 he was made a Trustee of Sri Aurobindo Ashram Trust by the Mother.

As the concluding installment of our special series of tribute to the Mother, the text of five conversations which Pradyot Kumar Bhattacharya had with the Mother has been published in the online forum of Overman Foundation along with an epistolary exchange between the Mother and him and a report of an incident recorded by him.

Pradyot: I am going to Calcutta. There they will ask me one question regarding the present situation—communal riots. What is the solution?

Mother: The solution is, of course, the change of consciousness. I know those other people behaved badly, like animals—even animals are better than human beings—but if people in India also do the same, they are playing into the hands of the forces that make people do evil and strengthen the hold of these forces. Retaliation like this is no remedy.

Pradyot: People here feel frustrated, they see no remedy, do not know which way to go, whom to look up to. They are going the wrong way, following the wrong lead. Isn’t the division of the country responsible for much of these troubles?

Mother: Yes, division of religion, of country, of interest. If people felt like brothers, not brothers who quarrel, but conscious of their common origin…

Pradyot: When are you coming upon the scene?

Mother: Don’t be under the illusion that I am not there. I am there, the force, the consciousness are there, but there is no receptivity. During the Chinese trouble, I was in those places at the front, concretely, but I am sorry to say that the only people who were receptive were the Chinese. The impulsion to come forward disappeared. That is receptivity. No one knew why they withdrew. On the Indian side a few were touched and they told me of terrible conditions.

Since World War II, I have been keeping Kali quiet, but she is restless. Times are critical, anything may happen. If people will only give up their ego.

Pradyot: I shall suggest a simpler way, to turn to you.

Mother: Perhaps the time has come to tell others what I have told you. You may talk if any occasion arises. Keep your faith and go like a warrior.

Pradyot: The objective of the present conflict with Pakistan is, I suppose, the end of the division.

Mother: Yes, of course. It is well understood.

But we have to be wide-visioned, large-hearted, generous. There should be no spirit of revenge. It will not be the rule of the conqueror over the conquered; it will be the reconciliation of fighting brothers.

News comes from the occult—of turmoil. But there is Power behind it. It seems the Lord has taken charge.

Pradyot: It seems everybody is against us; for instance, England, America.

Pradyot: In Bihar, although there has been rain owing to your intervention and green patches are visible, some places are still without any vegetation. There is a general scarcity of drinking water.

Mother: Are there still difficulties? The rain was not sufficient?

Pradyot: Perhaps not sufficient in those places. But are these difficulties necessary?

Mother: No! There are two reasons for them. One is the people’s inertia. They need blows to wake them up. The other is more serious; it is a sort of liking, a preference for dramas which invite the blows.

The sadhana is now going on in the cells. All difficulties will disappear but it will take time. I do not have much time to devote to this work, otherwise it could be done quicker.

What is the solution?

Do we know what is to be done? Are the problems too big for us? Have we the will to do our best? Beyond that, do we know that a prayer from the heart offered in sincerity and faith is answered by the Divine? Do we know that the Divine is with us here to guide us?

If we do, then all problems can be solved.

Mother: You have seen something during the drought. [1] I have seen it many times during, for instance, the Chinese invasion when we seemed to be totally unprepared and the Chinese withdrew, also during the Pakistani war last year when we could stand up to much superior armament.

There is no reason to despair, what is necessary is to be receptive.
Receptivity means, to offer
What we have
What we are
What we do
to the Divine

To the extent we are receptive, to that extent the problems, even the most difficult ones, can be solved.

Pradyot: I am leaving for Calcutta and I want to know what is the significance of the figures 4-5-6-7 which are said to symbolically represent the descent or manifestation which will take place on May 4. If I am asked, I should be able to tell people about it.

Mother: You came to me this morning—that is, in a dream—and asked me the meaning of 4-5-6-7. You can tell them:
4. Manifestation
5. Power
6. New Creation
7. Realisation

This will keep them quiet. I am not sure that it did not happen on the 24th April. The meditation on that day was unique in my life. The very cells of the body were totally conscious. After the meditation I should have kept sitting for a few minutes. But I got up instead to reach the table and I nearly fell. Something was happening from New Year’s day, very very concrete. 24th April might be a preparation for 4th May.

Pradyot: You have asked us to help you. How can I help you? What am I to do?

Once a leader of a political group went on a sham hunger-strike on the pavement opposite the Ashram gate. It continued for several days, and the Mother seems to have instructed people that they need pay no attention to him. One fine morning, he was conspicuous by his absence. What had happened was that the day before this, Pradyot had gone to see the Mother and asked her, “Why don’t you stop this comedy?” She had replied, “The Divine alone can do it.” Pradyot had retorted, “But are you not the Divine? Why do you confuse me?” She had smiled and said, “But I am telling you what people say.” The next day the Divine acted.

[1] This refers to the November rains in the drought-affected areas in Bihar and Uttar Pradesh.

8 Replies to “Pradyot Kumar Bhattacharya’s Questions and the Mother’s Answers: Five Talks, One Letter and A Report”