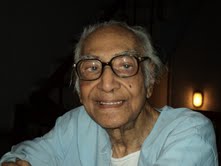 Many people around the world will be saddened to learn of the passing of Professor Arabinda Basu who, almost 96, left us on Tuesday July 3rd around 7.15 pm, from the Ashram Nursing Home where he had been under treatment for a couple of weeks. Arindam-da – as he was known to many – was named after Sri Aurobindo at his uncle’s request, and came under the influence of the Master as a college student in the early 1930s. During the 1940s he was regularly visiting the Ashram for Darshan, and he received the encouragement of Sri Aurobindo for his academic career. In the 1950s he was invited to become Professor of Comparative Religion at the University of Durham in the U.K. There he was in touch with the first small group of Sri Aurobindo’s followers, brought together by A.B. Purani – our friends Joy Calvert, Edith Schnapper, Morwenna Donnelly, Dick Batstone, Stella Littlewood (mother of our Martin Littlewood of AVI UK) and others. After returning from England in 1968 he settled in the Ashram for good. His sweet refined nature and scrupulous scholarship made him one of the best loved sharers of Sri Aurobindo’s vision and teachings, and he was often invited to give lectures around India and abroad. He was a close friend of Nirodbaran, and the two of them used to come to Matrimandir and to Savitri Bhavan together. Arindam-da has given some wonderful talks at Savitri Bhavan, the latest in April 2009 when he shared his memories of Sri Aurobindo. Over the past three years he was becoming increasingly frail. Those who knew him will remember him with gratitude and affection, and his presence as a link with the earlier days of the Ashram will be sadly missed. For more details of his life see http://overmanfoundation.wordpress.com/2012/07/05/the-passing-of-prof-arabinda-basu.

6 Replies to “Professor Arabinda Basu: A Tribute by Shraddhavan”