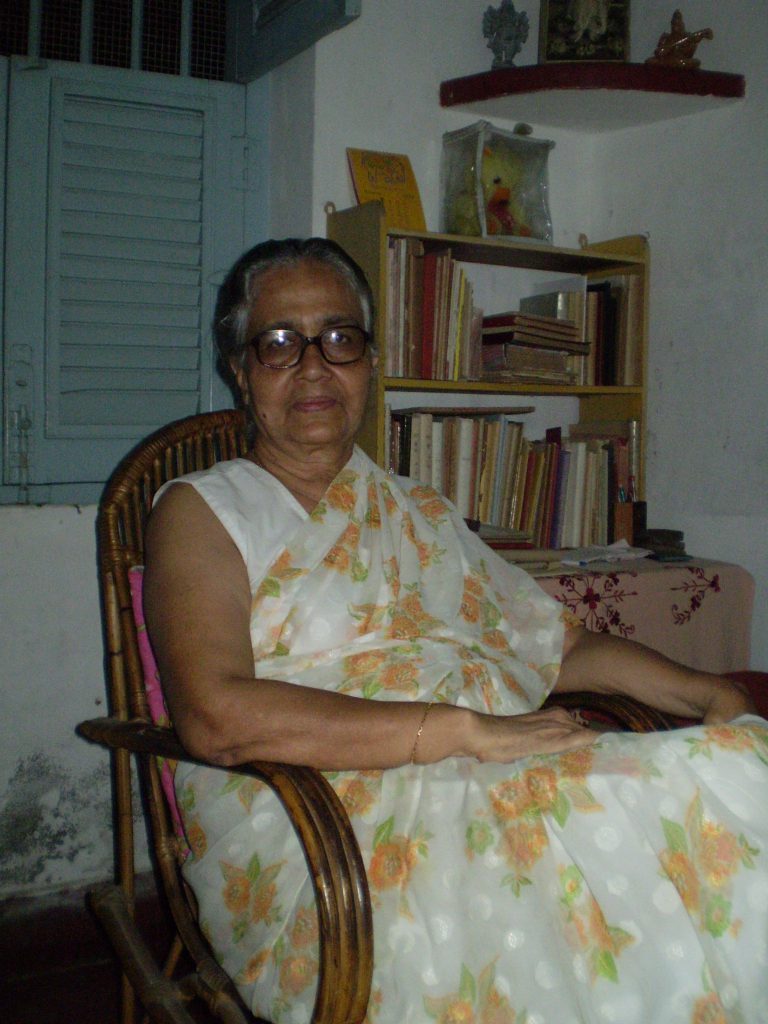 Ratna Chakrabarti (28 July 1941—3 March 2017) was born to Chief Justice Santosh Kumar Chakrabarti and Bokul Rani. She received her early education in Arambagh Girls School. Afterwards she joined the Mahakali Balika Vidyalaya and Howrah Girls College and passed her matriculation examination in 1956. In that very year, she joined the Sri Aurobindo Ashram at Pondicherry. Having completed her school education in 1963, she joined the Sri Aurobindo International Centre of Education with the Mother’s approval as a teacher of History, Sanskrit and Music and served the institution for the next fifty years.

On the occasion of her seventy-seventh birthday, an article on Ratna Chakrabarti penned by Prof. Kittu Reddy titled Ratna As I Knew Her has been published in the website of Overman Foundation as our tribute to the departed soul.

Ratna As I Knew Her

Ratna was born in Howrah district of West Bengal on 28 July, 1941. After finishing her studies up to Matriculation in Howrah, Ratna and her family settled down in the Ashram. Her father who was a judge stayed back in Kolkata and continued his practice. He finally rose to become a judge of the Calcutta High Court. He would visit the Ashram regularly whenever he got the chance and finally settled down in Pondicherry post retirement. Ratna, along with her two sisters and younger brother, was admitted in the Ashram school. The sisters completed their studies in the Sri Aurobindo International Centre of Education. She was a good student and excelled in Sanskrit and History. Shortly after graduating, she was appointed a teacher of Sanskrit and History. In fact, it was Jagannath Vedalankarji who proposed her name for teaching Sanskrit. Her name was sent to Mother, who warmly approved of her becoming a teacher.

We became friends in April 1962, when she was still in the Higher Course. As usual, I wrote to Mother about our friendship. At that time, Ratna’s mother wanted to take her back to Kolkata after she completed her studies to get her married. Ratna, however, did not want to get married and wanted to settle in the Ashram. I wrote about all this to Mother and She asked me to stand by Ratna if she wanted to stay here. It was a difficult time for Ratna but finally everything settled down and her mother accepted her decision. I recount now an interesting incident which reveals our relationship. In July 1964, I requested Mother to present to Ratna on her birthday a childhood photograph of Herself which I sent to Her. She put the photo in a beautiful envelope and gave it to Ratna on the 28th of July. For me that sealed our relationship through the Mother. On quite a few occasions Mother told me both orally and in writing that I must stand by her.

Mother’s care for Ratna’s well-being is illustrated in the following incident. Ratna used to live then on the 1st floor of a house very close to mine. On 1st November 1964, her entire family decided to go to Kolkata, but Ratna did not want to join them and stayed back. However, she was afraid to sleep alone at night. So I spoke to Mother through Vasudaben and Mother immediately said that someone should stay with her at night. My sister’s name was proposed and so she slept at Ratna’s home for the next month and a half.

She was a fine singer with a mellifluous voice. Her forte was Rabindra Sangeet, which she rendered most wonderfully. She learnt music from a large number of teachers in the Ashram – Sahanadi, Tinkorida, Sunirmalda. As we became friends, and I was very fond of Indian classical music, she developed a taste for it and gradually became very fond of it. She had only this regret that she could not herself sing classical music.

Soon she started taking singing classes at the request of many Ashramites. Most of the classes were held at her house. As her singing skills developed, she gained confidence and began to organize programmes. These programmes were a combination of songs and recitations. The themes selected were always centred on Sri Aurobindo and the Mother. Thus, there was a programme on Sri Aurobindo and the Freedom Movement. Another programme named Saswata Bharatam was on India and its awakening. This programme was highly appreciated and had to be repeated on more than two occasions. In all these programmes, she would select the songs and I would select the passages to be recited from the writings of Mother and Sri Aurobindo. She worked very hard for these programmes, teaching the singers both individually and in groups. It meant a lot of work and she enjoyed it immensely. Indeed, she was a perfectionist and would not tolerate shoddy work. She was patient and repeated the same lines many times even with those who sometimes sang out of tune. For me it was a delight to work with her.

One of the high points in her life came when Champaklalji and Nirodda requested her to sing to Sri Aurobindo in one of his rooms.

Her repertoire in singing was very wide. She sang Rabindranath Sangeet, Bhajans, songs on Mother and Sri Aurobindo and chanting of Sanskrit slokas and hymns. She used to sing the Gayatri Mantra beautifully and very often before she started her singing class. She sang Aum most beautifully and took part in Narad’s choirs. It seems that one day when Aum was being chanted by Narad’s group around the Samadhi, Mother heard it from Her room and was impressed by Ratna’s voice. Sunilda used to invite her often to chant Aum. She had a deep regard for Sunilda. At the same time, Sunilda loved her very much and whenever they met, even on the road, Sunilda would give her a warm hug.

She regularly attended my classes on Sri Aurobindo’s works; she would take copious notes which showed how thorough she was in her study. As a result of this contact with Sri Aurobindo, she fell in love with Him. She felt very close to Him and recounted to me some of her experiences.

Life seemed to be going on fairly smoothly when tragedy struck her. It entered stealthily without as much as a warning, in a quiet way. In 2014-15 she showed signs of dementia. I noticed that very soon and became very kind to her; I was patient, never contradicting her making her feel comfortable. However some were quite unpleasant to her and that caused her a lot of pain. To compensate that she developed a tremendous love and aspiration towards Sri Aurobindo. I realised that and would read out to her the biography of Sri Aurobindo. She loved it and lapped in every word.

She spent the last years of her life in singing and Sri Aurobindo. On 1st March she had a cough and fever. Next day she was admitted to the General Hospital. She left her body on 3rd March at 0910 hours.

She remains in the hearts of all those who loved her and there were many who cherished her.

She was a rare soul full of compassion and love especially for the poor and deprived. She had a deep aspiration for Sri Aurobindo and Mother and finally got merged in Them. 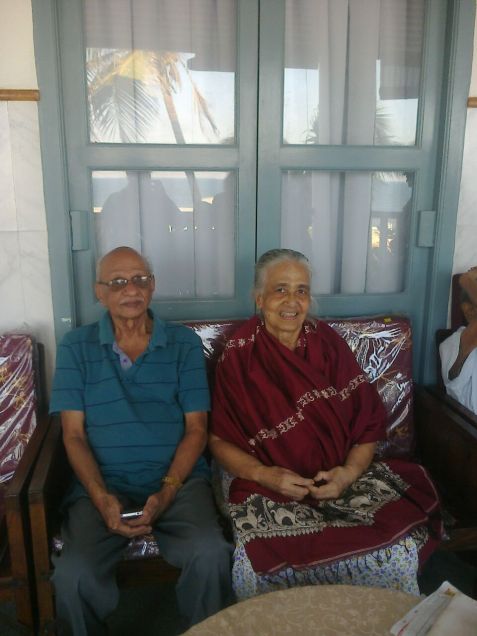 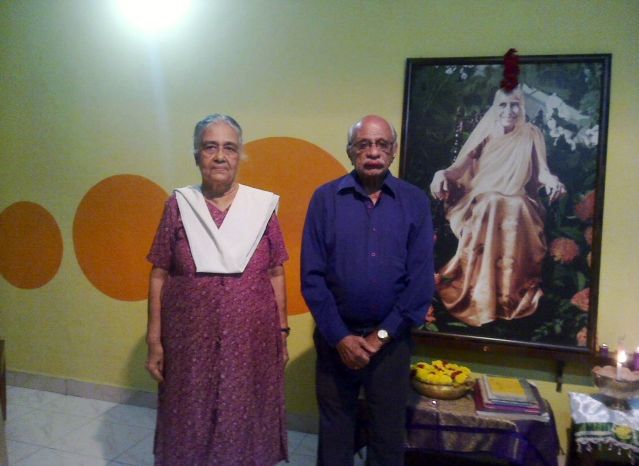 About the Author: Prof. Kittu Reddy was born in the Anantapur district of Andhra Pradesh in July 1936 to Narayan and Meenakshi Reddy. He is the nephew of Neelam Sanjeeva Reddy, the former President of India. At the young age of five in 1941 he was brought to the Sri Aurobindo Ashram, Pondicherry, by his father who was an eminent member of the Swaraj party formed by Chittaranjan Das. He has lived there ever since. He had all his education at the Sri Aurobindo International Centre of Education from where he graduated. He has been teaching at the same Centre since 1958. His subjects today are: The Foundations of Indian Culture, The Human Cycle, The Ideal of Human Unity (all books of Sri Aurobindo), Political Science, Social Science and History. Since 1987, he has been giving talks to the Indian Army on Indian culture, the Mission of India and Motivation and Leadership. In 1994, General B.C. Joshi, the then Chief of Army Staff, appointed him Adviser to the Army Welfare Education Society. Since then he has been in close touch with the Indian Army and has conducted workshops for the Indian Army, Indian Navy and the Indian Air Force. These workshops deal with Motivation, Leadership and the Indian nation. They have been held both in Pondicherry at the Sri Aurobindo Ashram and at training centres of the Armed Forces. He is the author of the following books: A Vision of United India: Problems and Solutions, Kargil: A Manifestation of a Deeper Problem and The History of India: A New Approach.

13 Replies to “Ratna As I Knew Her by Kittu Reddy”