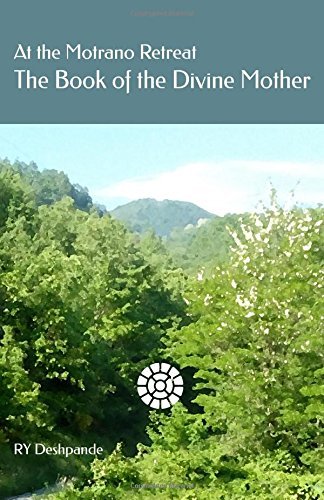 Title: At the Motrano Retreat—The Book of the Divine Mother

God said, “Let there be light and there was light” but seemingly displeased with the  pale  aura  of  the light, the Lord cried again imperiously in thundering voice “Let there be light” and lo and behold! There emerged from the last out post of the horizon a glorious form of radiant ‘Goddess Savitri’ scattering its supramental glow of light all over the Universe. On perceiving this dazzling light, the Lord was delighted, and gave a beatific smile of approval at the appearance of the saviour Light with message of hope – O ye  aspiring souls for immortality, Here I come.  Fear not. I will take you on the wings of my mantric fire to your destined home—the bosom of the Divine Mother.

Yes, we are not playing with images here. This kind of vivid picturesqueness is a necessity to describe feebly what  Savitri  is! Just  as  the legendary  King  Bhagirath  brought down the descent of   the  mighty river  Ganga, so in the like manner,   Sri Aurobindo made possible  the  descent of  Savitri  by  His Yoga—the Supramental  Ganga—that is—Savitri.

A million words must have been written and spoken about the divine glory of the epic  Savitri —still—its mystery remains beyond the ken of our grasp.  Only the conclusive  words of certitudes and pronouncements about the mystery and the truth of  Savitri  rest with the Divine Mother and  Sri  Aurobindo.

We are here hopelessly helpless to utter anything more about  Savitri  leave aside reviewing  The Book of  Divine Mother which is an impressive  series of  discourses given by  the learned Prof.  R. Y.  Deshpande.

Therefore, we will only attempt to express, however inadequately, the Matri-Darshan of the Divine Mother by King Aswapati which literally it is. In the four magnificent cantos  Sri Aurobindo has offered this  privileged blessings to us—the mortals to participate in the  high sublime  drama of  supernal encounters/dialogues  with the  Divine Mother and other numerous episodes. It is simply wondrous. The book has all the  ineffable scenes and super-scenes interspersed with gripping  dialogues between  the divine Mother  and  the great Yogi—King  which decide our destiny eventually after the boon is vouchsafed by the Divine  Mother upon  Her Children  on the persistent  demand and imploring  by King Aswapati.

Words fail us to say or add  anything further. Salutations to Savitri the harbinger of the Supramental  Dawn.

Prof.  R. Y. Deshpande   is a trained scientist endowed with acute scientific temper. He is also a sadhak and a poet of considerable merit.  He has spent years and years in splendid seclusion to write ceaselessly all about Savitri as he thought/thinks, that there is nothing more companionable than the sacred and uplifting company of Savitri. His writings on and about Savitri have a large fan following as it is marked by lucidity, disarming spontaneity and simplicity.

This book for the purpose of review is the result of a series of lectures given in the sylvan retreat of Motrano, Italy, by Prof. Deshpande. These lectures carry author’s stamp of   distilled wisdom, profound  scholarship  and incredible gift of  connecting and interconnecting all the minutest details of each and every  eventful/monumental  happenings  and showcasing expertly the many sided spiritual links in this extraordinary book of the Divine Mother.

We look upon this book consisting of four cantos unarguably as the blazing heart of Savitri. There are apt profusions of quotations and references spread all over the discourses to support the  assertions and statements occurring repeatedly  in the book. These four cantos of the book of the Divine Mother are very crucial and indicate the turning point in the sadhana of King Aswapati. It is a book of adoration of the adorable Mother. The book of high spiritual achievements and fulfillment.

The author takes us along with him to introduce episodes after episodes from the book of the Divine Mother in an engaging style which is uniquely crafted by him and honed almost to a perfection. He is master of narratives and like a roseate-winged butterfly collected each day the nectar of understanding of the subtle nuances of Savitri from the verdant valley of Motrano !

The author has succeeded to a large degree in demonstrating his versatile skills in putting all the issues and themes occurring and re-occurring in these awesome cantos in a manner which is simply  admirable. He has gone to a very great length in these four cantos to elucidate again and again sharply  the seen and unseen backgrounds and foregrounds with  dexterous clarity of vision which is  marked  by  labour of love well attended with devotion. The author has not allowed his deep scholarship coming on the way in the free inflow of lectures and, instead, has allowed Savitri to speak for Itself.

The overall result produced is of high devotional fervour accompanied by impacting feelings as one receives by dipping in these talks which are spiritually wholesome and entirely nourishing for the aspiring souls.

The four cantos—The Pursuit of the Unknowable, The Adoration of the  Divine Mother, The House of the  Spirit  and  the New Creation  and  The Vision and the Boon—one perceives clearly as an ascending order. These four cantos form a single block and are pretty closely connected to each other. There is perceived clearly an onward movement. Our spokesperson at Motrano has delved deep into the secrets of these cantos almost in a conversational mode and stitched each line and each turn around skillfully. He, so it seems, blessed with critical seeing intelligence making the arguments and counter-arguments of the enigmatic issues fascinating. To be able to summarize the sense and essence of The Book of the Divine Mother in just three days is a remarkable act of versatility.

The Book of the Divine Mother is not only about our dry flat earthly existence but also of the great “Beyond” where at the apex of the worlds, the Supreme Divine Mother in Her decisive Voice declared  to come down in response to the prayer of  the Supramental Avatar, here under the conditions of the Darkness and Ignorance. The author has brought all these luminous features beautifully—and much more—in his inimitable style. He had struck the right chord and rapport with the selected band of the eager listeners.

There are just a few areas in the book which needs to be looked into critically. Linguistic skills at some places of the rendering lack proper finesse and do not quite match up with the high thematic aspects that the author is dealing with. At times, so to speak, the conversations with the audience become too colloquial and facile. And also, perhaps, a bit of analytical approach and surfeit of statistics could be avoided. However, these minor deficiencies do not in any way dim the overall touch of  mastery of the author in handling the complex issues in the book of the Divine Mother .

Truly, The Book of the Divine Mother is Nidhim  Paramam, as the Veda would say—the Supreme  treasure, indeed.

We can not extend further our response to this excellent work of Prof. R. Y. Deshpande  at the risk  of repeating ourselves. Let the readers take hold of the book and plunge into  It. It will be an experience of life time and worth cherishing.

Thank you, Prof.  Deshpande, for this generous offering  to the  countless readers of  Savitri  who are athirst for this genre of  Savitri-literature.

About the reviewer: Surendra Singh Chouhan is an ex-student of Sri Aurobindo International Centre of Education (SAICE); after finishing his Higher Course he taught for a year in SAICE. He is an international educator and a frequent visiting trainer and faculty in the world of academia who had taught Philosophy to the Chinese students in Shanghai under the auspices of Shanghai Normal University. Presently he is engaged in giving lectures on Savitri, The Life Divine and other works of Sri Aurobindo.

One Reply to “Review of R.Y. Deshpande’s The Book of the Divine Mother by Surendra Singh Chouhan”